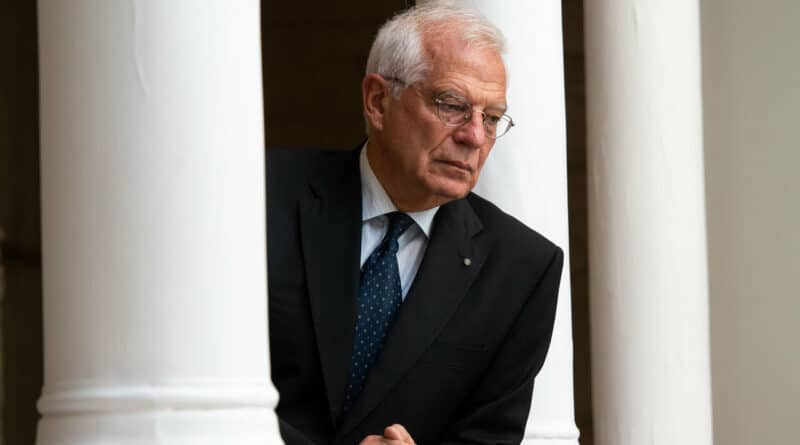 Hundreds of thousands of Europeans currently live in Venezuela. Most are Spanish, Portuguese and Italian-born or their descendants, but there are residents of all nationalities, especially older adults.

As citizens or permanent residents, they are being affected by the Venezuelan crisis, but they have decided to or they have had to stay in Venezuela, and since 2017 they are also suffering the consequences of the US-imposed financial blockade, which has been applauded by all European governments with hardly any exceptions.

In the latest communique of January 6 from Josep Borrell, the High Representative of the European Union (EU) for Foreign Affairs and Security Policy, it can be interpreted that Venezuela is a territory that is in a certain limbo, since the EU does not recognize any government or institution of the country.

Since January 2019, the European administrations do not recognize the government of Nicolás Maduro, and now they no longer recognize Juan Guaidó as “interim president” of Venezuela. They have adopted the same policy regarding the National Assembly (AN) elected on December 6, 2020, and also for the “administrative continuity” of the “Guaidó Assembly,” which they have described as “outgoing”.

A country “without government” is a nation where laws are not followed, where there is no legitimate monopoly of force, where life could be in danger. Therefore, this status puts Venezuela at risk and, of course, those who live in it, including the Eurodescendants.

Could this situation change?

“The EU will maintain its commitment to all political and civil society actors who are fighting to return democracy to Venezuela, including in particular Juan Guaidó and other representatives of the outgoing National Assembly that was elected in 2015,” reads the recent EU communiqué. It has received numerous criticisms for being ambivalent, indeterminate and useless for any of the parties involved.

Although it is true that the statement expresses a moment of diplomatic misguidance because it has not succeeded in developing a policy with an aim to try to get the relations between the bloc and the South American country out of the quagmire, we cannot ignore the complex scenario with which Europe’s relations with Venezuela ended during the administration of Federica Mogherini that culminated last October.

Through this latest official statement, the EU no longer gives Guaidó any belligerence; instead provides him the same status as other political actors. It barely includes him in a “particular” way, but without recognition of any charge.

Nor does it mention the “delegated commission” that Guaidó installed, virtually, together with a group of deputies.

The communiqué, drawn up one day after the new National Assembly was installed and the outgoing parliament decided to remain in power for an indefinite period of time, has turned over the page of the “interim government”, which the EU defended with so much effort since January of 2019.

It should be kept in mind that the parallel government had a great mentor who had a lot of power in Europe: Trump. And that rebuilding international relations implies dismantling the Trumpism that deeply affected the European institutions.

End of Trumpism in Europe?

Trumpism had a number of followers in Europe. For example, Mogherini, who formerly held the same post that Borrel holds now and was also the Vice-President of the European Commission, very proactively subordinated European policy on Venezuela to the global dictates of the Trump-led US conservative government that is about to end.

Trumpism was characterized in its relationship with Venezuela by the imposition of unilateral coercive measures, first against Venezuelan officials and then against state companies and their basic trade operations. It has recently extended the sanctions regime towards diesel, the main fuel for transporting food and people, which may exacerbate the crisis in coming weeks.

Mogherini backed all such measures. During her tenure, the European Union applied measures against representatives of the Venezuelan government. Sanctions were used as threats at every juncture.

Hence, it is not that Venezuela is in Borrell’s limbo, it is that the pendulum is turning very slowly towards post-Trumpism, impregnated by expectations about the departure of the Republican Party government.

This does not mean that Borrell is going to completely renovate diplomatic and economic relations with Venezuela. It means that it is going to try to dismantle, as far as European conservatism would allow it, the Trumpist architecture that has got established in the spaces of European government.

Now, the moment that marks the beginning of Borrell’s administration is of greater unknown because, until this January 6, the EU recognized the National Assembly of Venezuela. Now it does not recognize any administration of the country. It seems that this outlines Venezuela as a territory without government, without authority.

It is enough to remember the specific threats that the Trump administration made against European petroleum companies like Repsol of Spain and the Italian company Eni. According to Mauricio Claver-Carone, who served as director for the Americas of the US National Security Council (and who is now the director of the Inter-American Development Bank), the sanctions would be “devastating”, specifically mentioning these companies.

Could the situation today be different?

Borrell leaves Venezuela in limbo by ignoring its institutionality, but is already dismantling Trumpism.

The first thing that the communiqué does is to stop recognizing Guaidó as the country’s interim president. And this is an important advancement because it is ending the façade that the Trump administration mounted, and that constantly makes a fool of those who followed his game because the “interim government” can barely be described as imaginary.

Borrell is waiting for the pendulum to swing towards post-trumpism, as it is happening, and this will allow Venezuela to be reconsidered from a political position and no longer from that of “all cards on the table” which included a military invasion, with which Trump threatened. Although later understanding suggests that the outgoing US president never said it seriously, but always as a way to ingratiate himself with the Latino vote of the electorally important state of Florida, it is evident that it has had an impact on the world, and many European companies had to cancel their businesses with the Caribbean country.

Borrell has already declared that Venezuela must return to dialogue between the parties, something that has been constantly denied by radical opposition actors, who until now were considered valid interlocutors by European governments, and some of whom are seeking asylum in Spain, as is the case of Leopoldo López, who has even met with the Prime Minister of Spain, Pedro Sánchez.

Everything seems to indicate that although President-elect Joe Biden will not necessarily turn the page on Venezuela, there will come a time when political tensions will decrease, and this may lead to normalization of trade relations by Europe, marked by diplomatic ignorance and the pressures of Trumpism, today in free fall.

Can Borrell change the European approach towards Venezuela and deactivate the punitive mechanisms? That remains to be seen. If he can do that, it will probably be achieving, at the very least, a safer place for the Europeans who live in Venezuela.