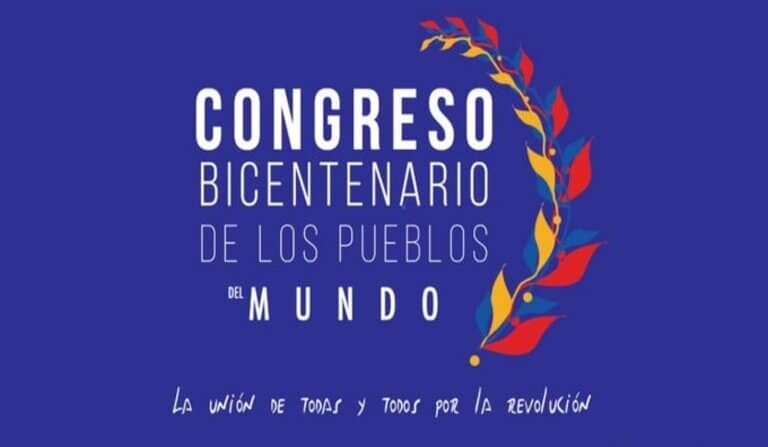 Poster of the Congress. File photo.

The CBPM launch took place in the Manzanares room of the Meliá Caracas Hotel and was attended by dozens of delegates from 123 countries in Europe, Africa, Asia, and our America. It marked the beginning of three consecutive days of deliberations in groups divided by thematic areas. The delegations will share and discuss proposals.

The meetings serve to advance the networking for movements and organizations struggling on a global scale, said Julio García, a secretary of the CBPM. He highlighted the assembly as an anti-imperialist and internationalist space for dialogue with social movements.

“We have reached a place we never reached before”
Andreína Tarazón, secretary of the CBPM, commented that the congress constitutes a “successful strategy” to advance the left and progressivism beyond its current limits. “The idea is to create a fighting agenda that transcends the groups,” she said. Tarazón reported that in the three-month preparatory stage more than 74 section meetings were held, and 2,150 social movements and political parties were included, which gives an idea of the dimensions of the initiative.

Likewise, the young Tarazón said that one of the central topics of debate during the three-day Congress, held from June 21 to 24, is the unilateral coercive measures that the United States government imposes on sovereign nations. “We have to mount a collective complaint, which must reach beyond the media and international organizations,” she said. “It is necessary that we defend the reality of Venezuela, Cuba, Iran, and of every people that rises up in the world and resists.”

Tarazón added that among the thematic axes “elements relating to organizational continuity and tracking” are of particular importance, because “it is useless to find ourselves in these spaces, if afterwards we do not establish the mechanisms to follow up on each conclusion and each agreement.”

Intense debate
Professor Adán Chávez Frías, coordinator of the CBPM and vice president of international affairs of the United Socialist Party of Venezuela (PSUV), considered it “the first time in the development of these revolutions of ours that we have achieved a meeting of this magnitude, bearing in mind that in the last three months we have held dozens of virtual meetings… with revolutionaries from all corners of this planet.” A strategic agenda will be defined at the conclusion of the Congress, said Chávez.

“This is a primary stage in this global struggle for the liberation of our peoples,” added Chávez. In his view, the left is taking a quantum leap with this convention of the international chapter of the Congress. “We are going from meetings to approving statements—which is very important—to defining concrete actions,” he added.

RELATED CONTENT: Countdown Begins in Venezuela for Bicentennial Celebration of the Battle of Carabobo – Legacy of Freedom

On Monday night keynotes will be presented by Piedad Córdoba, the famous Colombian human rights defender, and Tibisay Lucena, chancellor of the National Experimental University of the Arts (UNEARTE) of Venezuela and former president of the National Electoral Council of this nation. Córdoba’s presentation is titled “Human Rights and Institutional Complicity in the Criminalization of Popular Uprisings” while Lucena’s is “Democracy in Check: Keys to Building Independence and Sovereignty through the Transparency of Electoral Processes.”

The activity takes place during the week of activities commemorating the Bicentennial of the Battle of Carabobo, which bathes it with historical significance. The conclusions will be gathered in a plenary statement.