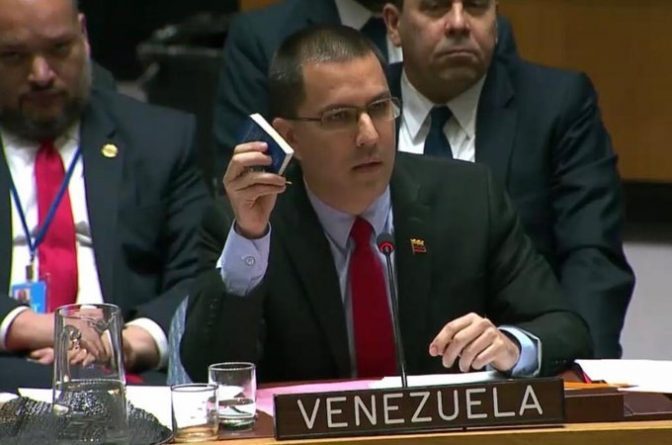 From the Security Council of the United Nations, the Minister of Foreign Affairs of Venezuela, Jorge Arreaza, reaffirmed that the Government of President Nicolás Maduro, the people and the Armed Forces, are amalgamated to its Constitution and the Charter of the United Nations, while reaffirming that Venezuela is irrevocably free and independent!

In his speech Arreaza asserted that the United States is rudely in charge of the intervention and the coup d’état that they try to develop in Venezuela. “They are at the forefront of the coup d’état, they dictate the orders to the Venezuelan opposition and governments of the region.”

In this regard, the Venezuelan Foreign Minister emphasized that the Security Council should be convened to allow Venezuela to present the evidence of the participation of the United States in the coup in Venezuela. “The United States should be evaluated at the UN.”

In the same way, in his speech Chancellor Arreaza lashed out at the threat of the Spanish government and other governments of Europe, so that elections are held in Venezuela, in a span of eight days. “Europe giving us eight days of what? Where do you think of such interventionist action? Why have not you made elections in Spain, in the United Kingdom (to select directly your presidents)? Devote yourselves to your affairs, respect the self-determination of the people.”

Finally, the Venezuelan representative before the Security Council of the United Nations, Jorge Arreaza, stressed that the United States is building an ideological wall against Venezuela.

At the same time, he reaffirmed that the Government of Venezuela supports the dialogue initiative, proposed by some countries.