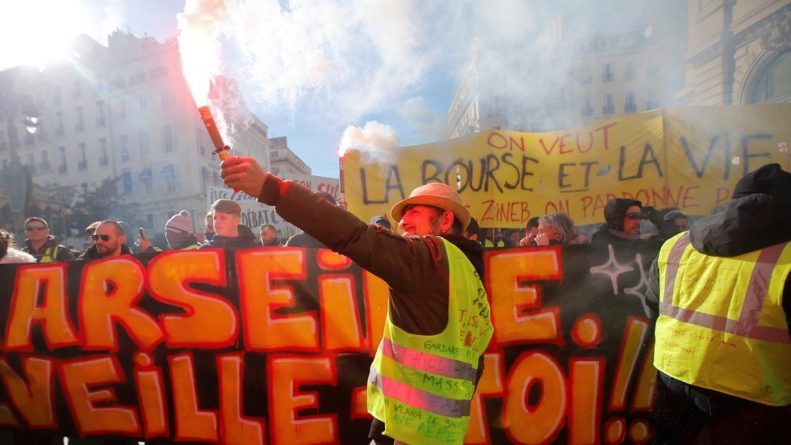 Protests have hit the streets of French cities for the 11th weekend in a row. In Paris, the rallies were yet again marred with violence and clashes ahead of the very first nocturnal Yellow Vest demonstration in the city.

Saturday’s protest in Paris began uneventful, giving hope of a non-violent demonstration for a change. However, tensions later escalated in the center of the French capital at Bastille Square, with protesters and police engaging in a tense standoff that continued after the sunset.

So far, 52 people have been detained in Paris, BFMTV reports, citing police. Some 4,000 people have taken part in the Paris protest, with about 69,000 demonstrating all across France, according to official data released by the Interior Ministry.

Yellow Vest protesters tried to erect barricades with some fences, scavenged from a roadworks site, and scaffolding. They also set items on fire and pelted law enforcement with various projectiles.

Police responded with tear gas and deployed a water cannon to put out fires and push back the protesters. A number of people were detained following the violent altercation.

Riot police were also reinforced by a K-9 unit. Apart from the usual police-dog garments the canines sported shoes, as the weather in Paris is quite wet and chilly. Several people have been injured during the clashes, one of the protesters sustained an eye injury and was taken away from the square by paramedics.

The man was identified as Jerome Rodrigues – a popular figure within the Yellow Vest movement. The man was live streaming and captured the moment he was hit by a grenade shrapnel.

A police officer was injured as well, apparently getting hit by shrapnel from a sloppily-thrown grenade.

Other French cities have also seen scuffles between the Yellow Vests and law enforcement. In Marseilles, clashes broke out in front of Center-Bourse shopping mall, with the police deploying tear gas against protesters. The town of Evreux, Normandy, has become a scene of heavy clashes between the police and protesters, who have torched vehicles and tried to erect barricades in the streets.

Chaotic scenes of law enforcement charging the Yellow Vest crowd en-masse, in the narrow streets of Evreux, have surfaced online.

In Lyon, the police force has used tear gas extensively against the Yellow Vests, with a thick plume engulfing the city’s streets.

The protest is expected to continue through the night – in Paris at least, as the Yellow Vests have announced their desire to get nocturnal. Some of the Yellow Vest groups have already vowed to protest every Saturday night from now on.