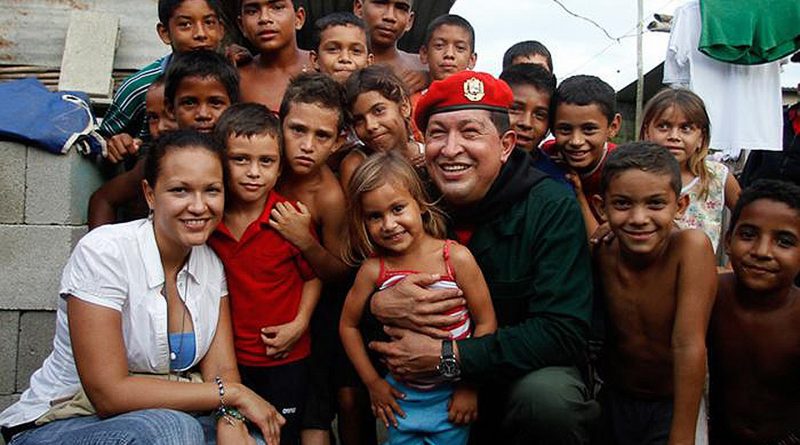 A repeated line in the discourse of Venezuelan’s antidemocratic opposition is that the Bolivarian Revolution and Commander Hugo Chavez divided the country among “rich and poor,” fracturing it into two poles and fostering hatred among Venezuelans. In this connection, according to the statements released almost daily in media outlets and in social media (mass instruments at the service of the centers of power of the capitalist world), such social fragmentation is “the worst legacy of Chavismo.”

This is evidently one of the most repeated lies by the enemies of the Homeland. We continuously hear or read about it as they long for “those old times in which we used to be happy and there were not differences among us,” just to mention one of the abundance of lines of their ideological traps. Beyond showing the bourgeoisie’s false morale, this is also a complete well-prepared propaganda staging, mainly focused on the working class and above all on the middle class.

The first thing we must underline is that in 1999, when Commander Hugo Chavez began his process of large transformations looking to free the country, social inequalities were huge as a result of the arbitrary distribution of oil revenues, through which a few (the bourgeoisie) were getting richer while the rest of the population were getting poorer. When the Bolivarian Revolution started, extreme poverty was 10.8 percent and general poverty was 29 percent. Today, regardless of the induced economic war against us and all the difficulties created by the U.S. empire, extreme poverty rates are at 4.3 percent and general is at 17 percent. Capitalism’s ideological apparatus however has always tried to create a false welfare world in which happiness is related to an advance in “social status,” through an alleged “equality of opportunities” for those who dream of successfully climbing that scale no matter who or what is left behind.

Capitalism is not interested in finding out about what are the causes behind social gaps, rather justifying them through their fraudulent judgment: “They are poor because they’ve decided be that way,” hoisting the free competition flag as its greatest contribution to progress. Therefore, under the premise of “the survival of the fittest,” it has promoted individuality, selfishness, racism, and other ways of discrimination in the societies under its control.

It was precisely the historic leader of the Bolivarian Revolution who exposed the essence of those democracies at the service of transnational companies. Hugo Chavez changed things up and redistributed oil revenues, prioritizing social programs, meeting the needs of those who had been historically excluded. At the same time, he unveiled the objective causes of poverty, which actually infuriated the stateless oligarchy whose hegemony had been covered and unchallenged under the farce of a happy country with soap operas and beauty contests. That oligarchy intended then to spread hatred among Venezuelans beyond the simple division between pro-Chavez and opponents, a logical division in a Nation in which the vast majority of the People awoke and assumed a project, the Bolivarian Project of independence and sovereignty, regardless of those who wanted to continue with the old politics implemented through the power-sharing agreement between the two main parties during the eighties.

Venezuela’s bourgeoisie fostered an ethnic, cultural and social confrontation that reached crucial levels, imposing violence as the only way to end the Revolution and its achievements. It is just enough to remember the terror unleashed by street barricades known as guarimbas (a real testimony of hatred and fragmentation), funded and incited by the opposition pseudo-leadership and in which people were even burnt alive just because they seemed to be pro-Chavez. So then, who was it that fostered hatred and violence?

While the oligarchy fostered confrontation, our Eternal Commander called on the unity of our People, on the integration of Our America. And today, when entrepreneurial class, the elites of the Catholic Church, and opposition spokespeople urge to reject all that related to Chavismo, the Bolivarian Revolution has maintained its call on dialog, a peaceful solution to problems, to peace and coexistence. This is an indisputable truth. But the experts at the service of imperialism do not talk about it and they will never talk about it.

They won’t because truth is not on their side. Truth is on the side of the People, who have waited centuries of suffering to achieve their sovereignty and become the builders of their own destiny.

Let’s unite and we will be invincible!