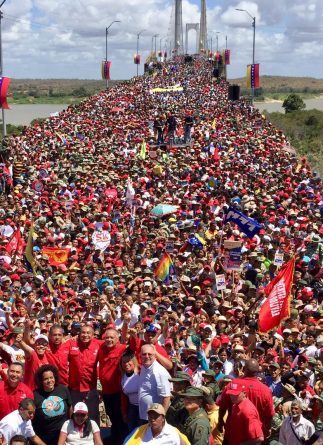 “The people of Bolivar state (south east Venezuela) are clear on their love and loyalty with the homeland, the Bolivarian Revolution and the historical legacy of the speech that the Liberator Simón Bolívar gave in Angostura currently Ciudad Bolívar on February 15, 1819 and that marked the birth of the Gran Colombia”, said Diosdado Cabello, vice president of the United Socialist Party of Venezuela (PSUV) during a major march and rally for peace and in support of President Nicolás Maduro, held at Puente Angostura, on the magnificent Orinoco River.

Before thousands of workers of the basic industries, students, housewives, peasants, fishermen, social leaders together with members of the Bolivarian National Armed Forces (FANB) who occupied every inch of the Angostura bridge and its road accesses, the president of the National Constituent Assembly (ANC), rejected the threats of the president of the United States, Donald Trump, against the FANB and the Venezuelan people.

He said the attitude that the US has maintained in relation to Venezuela only shows that their only interest is to destabilize democracy to impose a complacent president and seize the country’s natural resources, many of which are concentrated in the Bolivar state, such as coltan, gold, diamonds and water resources .

“Every day they (the White House) threaten the members of the FANB and their families, because they believe that these are the military (coup plotters) of the Plaza Altamira. But they are wrong because these are soldiers of Bolívar, of Chávez, deeply anti-imperialist and revolutionary,” Cabello said.

Supposed Humanitarian Aid must not cross the border
He urged the people of Bolivar State to remain steadfast and defend the frontiers against the threat of the Venezuelan right, the US and neighboring countries such as Brazil and Colombia to force a shipment of 70 tons of alleged “humanitarian aid” across the borders next February 23. Bolivar State has borders with Colombia and Guyana.

“It is neither help nor is it humanitarian (…) We do not need help, but we demand that the nation’s accounts be released to buy medicines anywhere in the world, without blockades of any kind,” he demanded.

He considered that this humanitarian aid is nothing but a big business deal that will benefit those who promote the invasion of Venezuela and noted that “those who want to see the gringo flag waving here will find instead the flag of eight stars of the Bolivarian Republic of Venezuela waving forever”.

Cabello addressed those who have doubts about the danger that lies in the country to leave aside “lukewarmness” and pointed out that history will judge those who are not determined to defend their country.

In this regard, he pointed out that the obligation of every revolutionary is to talk with those who have doubts and explain the danger of false promises of the opposition, which speaks of amnesty and forgiveness to the Chavistas but that in the background prepares violence and retaliation against people who identify with social justice and equality.

And he rejected Donald Trump’s call for members of the FANB to betray his country and pointed out that Venezuelan soldiers want peace, but if the right comes with violence and the foreign military wants to come and kill Venezuelans, he will receive a strong response from the FANB and the people that support it.