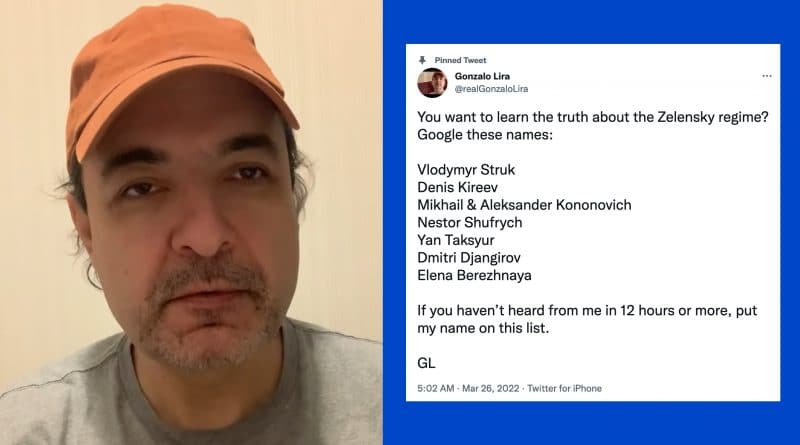 Chilean-American citizen Gonzalo Lira López is still missing in Ukraine after publicly opposing the Zelensky government. The journalist, writer, filmmaker and vlogger resides in Kharkov and has not been heard of since Friday, April 15th.

Kawsachun News has been following developments and Chilean sources closely, however, there have been no official declarations from the Chilean Foreign Ministry nor the U.S. State Department or White House on matter.

CNN Chile has reported that the Chilean Foreign Ministry had said that they are in contact with “the relevant entities” on the whereabouts of Gonzalo Lira. Kawsachun News does not consider CNN to be a reliable source of information and continues to seek verifiable information and official statements.

Numerous journalists and outlets had been in contact with Gonzalo just before his disappearance and had interviewed him about the conflict in Ukraine. Many fear that he, like many others, has been abducted or worst by Ukrainian State Security, something he had warned about in several occasions. Chileans and independent journalists are demanding a response and action by authorities of Chile and the United States.

Since the start of the Russian military operation, Gonzalo has provided numerous interviews to media such as RT and MintPress News on the situation in Ukraine, providing truthful insight and an alternative perspective from the ground.