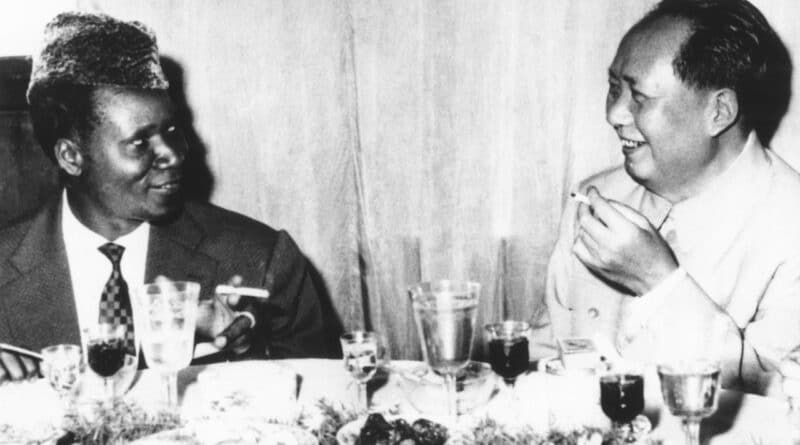 In the 1980s, during the cold war, white socialist groups from Marxist/Leninist, Maoist, Trotskyist, etc., tendencies throughout the U.S., were always quick to the draw in attacking our revolutionary Pan-Africanist ideology, work, and analysis.  And despite doing everything in their power to differentiate themselves from white socialists, white anarchists as a whole, haven’t historically been much better.  This reality continues.  For us, this has always been strange for  what we believe are two distinct reasons.  One, although the white socialist left typically desires to see socialists as a monolith, led by them of course— Kwame Ture (Stokely Carmichael) was always fond of saying, “The history of Europe is not the history of the world.”  In other words, although we respect Marxist/Leninism, etc., we do not view that ideology as the definitive ideology for socialist thought and practice.  The reasons we believe as we do reflect Kwame Ture’s statement which argues that the histories of Europe and Africa are fundamentally different.  In addition, as Sekou Ture correctly pointed out, the history of Europe is one of moving from nations to states.  The political chauvinism in Europe is an example here and a key element in understanding the disintegration of countries like the Soviet Union, Czechoslovakia, Yugoslavia, and Germany from centralized governments into smaller states.  The view coming from Europe today is that the breaking up of Yugoslavia (for example) and the emergence of Serbia, Croatia, etc., is a positive development for all of Europe.  If this is true, its because of the political contradictions particular to Europe’s history.  By comparison, Sekou Ture said Africa’s path is to move from states into one nation.  This makes perfect sense to us because every so-called state in Africa exists because of European imposed colonialism.  There is no logical argument to be made that the continuance of neo-colonial micro-states in Africa presents any benefits to Africans anywhere on the continent.  Pan-Africanism, something the overwhelming majority of people in Africa will tell you would be a good thing, is the total unification of Africa as one nation (under scientific socialism).

The second point is that revolutionary African formations, organizations, political parties, always include the study of Europe and European revolutionaries in their political development.  In other words, we have all read Marx, Engels, Lenin, Luxemburg, etc., and we have studied them as much if not more than the white left.  Unfortunately, when we discuss African revolutionary thinkers and movements in Africa, theorists/actors like Kwame Nkrumah, Sekou Ture, Amilcar Cabral, Walter Rodney, Amy Garvey, etc., it reveals the oblivion within the white left community.  Their knowledge of African revolutionary theory and practice is. slim to none.

RELATED CONTENT: US Values vs Chinese Values: Empire vs Bandung As Seen From Cape Verde (Africa)

We believe that this disparity carries on through the generations due to the institutionalization of white supremacy.  The white left of all stripes believes that their claim to white radicalism prohibits them from being infected by white supremacy.  In fact, many of them do not even have organizational positions on white supremacy, anti-colonialism, or settler colonialism.  And it’s this complete disconnect between our two communities that contributes to why we see political situations like the development of China so differently.

For many in the white left, their conscious or unconscious embrace of white supremacy prevents them from recognizing how much those backward ideals influence their perception of China today.  Their constant labeling of China as no different than European capitalist/imperialism is an example.

We are Pan-Africanists which means we desire for Africa and Africans to dictate Africa’s future in all areas, but we can believe that while also recognizing that China’s influence in Africa today is vastly different than what the colonial/capitalist/imperialist countries have been doing in Africa for 500+ years.  We also disagree with the assessment, coming primarily from elements within the white left, that China has abandoned socialism and is moving towards a capitalist pathway of development.  This disagreement is another example of the differences Sekou Ture spoke of between Europe and the colonized world.  China’s socialist revolution in 1949 was waged on top of a technologically underdeveloped foundation. And, unlike Russia in 1917, China had to deal immediately with a reenergized capitalist world coming fresh off of World War II and the devastation the Eastern Block socialist countries experienced as a result of that war.  As a result, their need to figure out ways to build socialism while balancing the necessity to feed the world’s largest population, while also having to compete for food and technology in markets controlled by capitalism (which necessitates prioritizing the accumulation of capital ) goes a long way in explaining their focus on industrialization over the last 50 years.  We believe China is still within that ideological and practical development process.  This is why they are in such dire need of African resources (which they receive by building much needed infrastructure in Africa, something the capitalist/imperialist countries have never done).  As a result, we believe the verdict is far from decided for China on where they will be 50 years from now economically.  We do not expect the white left to understand our position because, as we stated, most of them have a severely underdeveloped understanding of colonialism and neo-colonialism.  This lack of understanding coupled with an ongoing and healthy injection of white supremacy, produces this anti-China analysis that lacks material basis in China’s history and conditions.  The lack of understanding also explains the racist perception of many from the white left about revolutionary African consciousness.

On that last point it’s crucial to clarify that the purpose of this article is not to make any call, demand, request, or any statement about the white left.  Our revolutionary Pan-African work has never, and will never, be dependent upon the support of a single European anywhere on earth.  Our work is carried out for and by the African masses.  This piece isn’t even being written for the white left.  We recognized decades ago that Kwame Ture was again correct when he spoke about how useless it is to argue principle with people who have no conscience, and anyone who refuses to acknowledge white supremacy as a covert and overt institution, regardless of how revolutionary they think they are, has no conscience.  If they did, they would be able to easily understand the fundamental difference between African nationalism rooted in anti-colonialism with the need for us to reclaim our identities as a weapon of dignity from the reactionary and elitist nationalism that paints Europe’s history.

Even Vladimar Lenin, one of the primary ideologues of the white socialist left stated in clear terms in his book Imperialism, the Highest Stage of Capitalism, that nationalism like the African nationalism we fight for is a prerequisite to socialist development.  We point these things out because many Africans follow the logic of the white left because the white left’s capacity to get their message out is so much larger than ours.  This piece is designed to help our people understand why organizations like Hood Communist, the All African People’s Revolutionary Party, etc. take the positions that we do.  Since everything is influenced by white supremacy, many of our best intentioned people on the left consciously or unconsciously believe the white left speaks for the entire left.

To summarize, it’s critical that African people seek our own political education processes so that we can understand the forces that influence the world and how that impacts us as African people. We also need to figure out collectively how to do better at increasing enthusiastic support for revolutionary African voices, organizations, and practices among us.  And we have to use all of that work to develop a power base strong enough so that our own cultural historical analysis is the only modem force driving us in our work.  Back in the cold war days, when the white left was so arrogant in their interactions with us, we used to annoy them constantly by saying “left or right, still white!”  I wish I could say this has changed, but it’s still the reality.  It’s not our responsibility to change it and until the white left evolves and develops some character and a broader anti-colonial political consciousness, despite the fact the saying is always met with complete anger by them when we use it, we see absolutely no reason not to continue because if nothing else, truth is always objective.