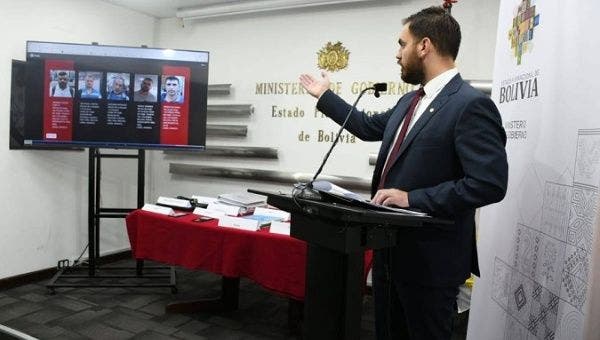 Añez regime’s top officials and foreign mercenaries plotted to assassinate Luis Arce before he could assume charge as the President of Bolivia.

On Monday, October 18, the Bolivian Minister for the Interior, Eduardo del Castillo informed that Colombian mercenaries were involved in an assassination attempt against Luis Arce in 2020.

Del Castillo presented audiotapes, emails, and documents showing that former Defense Minister Fernando López of the coup regime led by Jeanine Áñez had contact with illegal groups that were planning a new coup d’état in Bolivia.

Minister del Castillo named Germán Alejandro Rivera García, a Colombian citizen who entered Bolivia on October 16, 2020, and was part of the plot. Rivera is currently under arrest for the assassination of Haitian President Jovenel Moïse.

Contacts between the Bolivian far-right and foreign mercenaries were facilitated by Colombian Arcángel Pretel Ortiz, who organized a “business trip” to Bolivia before the end of the 2020 presidential elections, in which Luis Arce was the candidate for Movement Towards Socialism (MAS) party. He was accompanied by Venezuelan Antonio “Tony” Intriago, owner of Miami-based CTU Security that hired the Colombian mercenaries who killed Moïse. Currently, both Pretel and Intriago are accused of being the intellectual authors of the assassination of Jovenel Moïse.

The then Commander of the Armed Forces, General Sergio Orellana was also involved with the plan. The plotters, headed by López who is currently hiding in Brazil, were prepared to hire 300 people for the assassination plan against Luis Arce and expected foreign intervention in their support, as leaked audios published by The Intercept revealed earlier in the year.

In this leaked 2020 audio, U.S. mercenary contractor, 'J.E.P', tells Añez's Minister of Defense that he'll need three C-130s to pick up U.S. troops from the Southern Command airbase in Miami to work as "independent contractors" for a job in Bolivia. @MindeGobierno pic.twitter.com/ioYSxbZKax

Disagreements between the ministers and divisions inside the Bolivian Armed Forces seem to have thwarted the plan. Arce’s popularity after the elections also appears to have influenced the decision to abandon the plan.

“We know what you have done, and we know what you are doing,” Minister del Castillo said, referring to the coup-mongering opposition, as he presented the evidence at a press conference on Monday. “We ask all of you to stop and respect the rules of democracy and this country’s institutions. We will not allow you to murder and steal the people’s democracy once more.”

President Luis Arce commented on the revelations during his participation at a summit of social movements in La Paz on Monday. “They wanted to make an attempt on my life,” stated President Arce. “To those right-wing murderers, we are going to respond with a phrase from [historic Bolivian socialist leader] Marcelo Quiroga Santa Cruz: We know that sooner or later they will make us pay for what we are doing; we are willing to pay that price, we are always willing.”

President Luis Arce responds to new details of a 2020 mercenary plot against him: 'We are willing to pay that price.. we are not afraid!' pic.twitter.com/2OmkPTjcDL

Featured image: Eduardo del Castillo, Bolivian minister for the Interior, presents evidence of assassination plot on Luis Arce before he could become the president of Bolivia. Photo: Twitter / @AymaraRadio