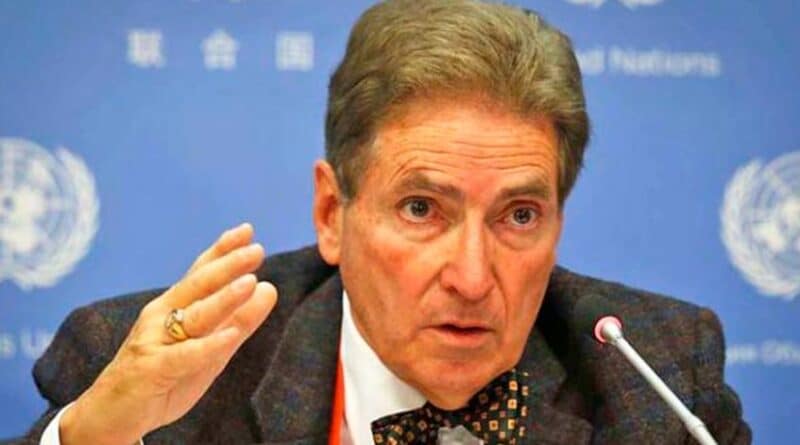 This Sunday, October 17, the human rights expert Alfred de Zayas, through his Twitter account, asserted that the case of “lawfare” presented during the kidnapping of the Venezuelan diplomat Alex Saab by the United States, apart from revealing the corruption that reigns in Cape Verde, attempts to place a sheen of “legality” on the abuse of Cape Verde’s extradition treaties.

“’Lawfare’ is a modern epidemic. In the past, governments did what they wanted and got away with it. Today they attempt to throw a cloak of legality over their abuse of extradition treaties and subvert the administration of justice in the process,” wrote the historian.

RELATED CONTENT: Alex Saab to Appear Today Before a Judge in Miami

Let us recall that the extraction of Alex Saab from Cape Verde to the United States, carried out on Saturday, October 16, occurred in the midst of accusations that the Cape Verdean justice system is participating in a case of “lawfare” [legal war: attack against political opponents using improper legal procedures, to give the appearance of legality], carried out to accommodate the requests of the US.

“Lawfare,” it should be noted, is an appropriate description of the events in question because Cape Verde does not currently have a bilateral extradition treaty with the United States. For this reason, according to the Venezuelan jurist Indhriana Parada, “handing over Alex Saab… violates international regulations by not being able to control the conditions of the Venezuelan diplomat.”

In the case of Saab, the Cape Verdean justice system violated its own Constitution, which establishes that extraditions for political reasons are prohibited. Similarly, declared Parada, the US maintains a repressive system of coercive and unilateral measures declared as illegal and harmful, in contravention of international law.

“Alex Saab is the victim of arbitrary detention and the Human Rights Council has every reason to defend him,” wrote de Zayas. “The abuse of extradition procedures threatens human rights defenders like Assange and diplomats like Saab.”

“The illegal kidnapping and extradition of Venezuelan diplomat Alex Saab is yet another example of US bullying and blackmailing—in total impunity,” added the lawyer in another tweet.

The illegal kidnapping and extradition of Venezuelan diplomat Alex Saab is yet another example of US bullying and blackmailing – in total impunity.

According to de Zayas, former UN independent expert on the promotion of a democratic and equitable international order, in Saab’s case an independent judge from Cape Verde could have rejected the extradition request on the grounds that there were political motives, as happened in the cases of Australian internet activist Julián Assange and Huawei businesswoman and Chinese executive Meng Wanzhou.

“Meng Wanzhou was unjustly detained in Vancouver, Canada,” wrote de Zayas. “Fortunately for her, China was able to organize a ‘trade’ to free her.”

“The Canadian judge should have rejected the frivolous demand of the United States, and not allowed Meng to undergo preventive detention for almost three years,” he added.

“What the United States does against its opponents Assange, Meng, or Saab is a form of state terrorism,” concluded the lawyer. “Someday perhaps there will be a whistleblower who will reveal to us how much the United States paid Cape Verde to participate in the legal deviation of this aberrant extradition.”