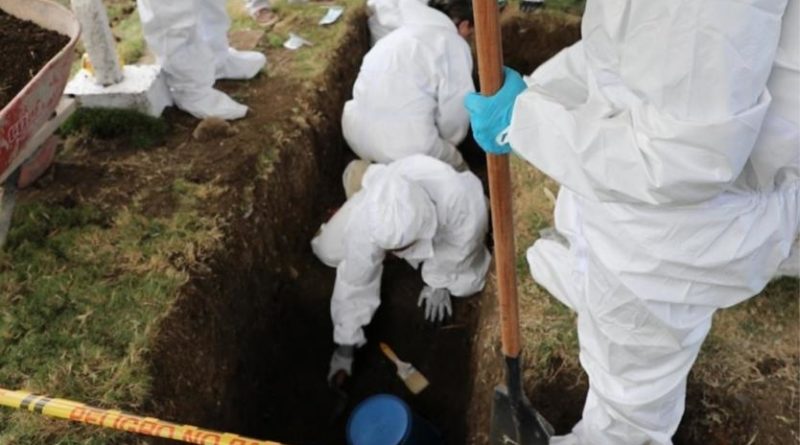 The Institute of Legal Medicine ensures that criminal justice investigations will determine cases of extrajudicial executions.

The daily life of Colombia walks on the edge of the confrontation with its recent past. Those years, the wounds of more than half a century of armed conflict, are periodically revived as happened on Saturday when the discovery of a mass grave in the municipality of Dabeiba, between Medellín and the Caribbean coast. There the Special Jurisdiction for Peace (JEP), the court born of the agreements between the State and the FARC to investigate the most serious crimes of the war, seeks the bodies of at least 50 people victims of extrajudicial executions perpetrated by the military between 2005 and 2007. The Institute of Legal Medicine received information on 17 cases. But the dimension of the drama of disappearances goes further. The country faces, according to calculations of this public body, the exhumation of around 200.

These are the vertigenous figures highlighted Tuesday by Claudia García, director of the forensic institute. “In recent years we have made a survey in all legal cemeteries, let’s say it somehow, and in the burials that are not legal in these clandestine graves, and we believe that the challenge we are facing is more or less of 200,000 bodies, where we have to look for the disappeared from the country,” she said on Caracol Radio. “The challenge is very great and we will have work for many years from the scientific point of view,” continued Garcia, who stressed the importance of the government’s involvement in carrying out that task.

Systematic disappearances still embody the most vivid memory of the conflict and affect thousands of families. That is why the work of institutions such as the peace jurisdiction or the Search Unit is key to trying to close the wound. Extrajudicial executions, wrongly called false positives, only represent a percentage of those cases. As highlighted by the head of Legal Medicine, it will be the investigations of the justice system that establish whether civilians were killed by soldiers and then presented as guerrillas killed in combat in exchange for awards and compensation. In the midst of an amalgamation of estimates on the thousands of victims of this procedure, official data offered by the Prosecutor’s Office indicate that between 1998 and 2014 there were more than 2,200 executions of this type. The vast majority.

At the moment, the forensic institute focuses on the pit found in the Las Mercedes de Dabeiba Catholic cemetery, in the department of Antioquia. First, with the autopsies of the exhumed bodies. And then the crossing checking of data will begin with the information of relatives of missing persons to find the genetic profiles. “We will work uninterruptedly and we will have the first advances, not finish the job because it is complex, towards the third week of January,” said Garcia.

RELATED CONTENT: Is Venezuela a Sanctuary for Terrorists and Drug Traffickers?

The phantom of the crimes committed in the past by the Armed Forces returned this year to shock Colombia and became again, for the first time since the signing of the peace and the beginning of the demobilization of the FARC, a central focus of the political debate. The succession of complaints – from a directive, already withdrawn, that opened the door to a system of incentives to improve statistics in the Army, the accusations against the commander of the ground force until the concealment of the death of minors in a bombardment against dissidents of the former guerrilla – the position of defense minister Guillermo Botero cost him a month and a half ago. His successor, former Foreign Minister Carlos Holmes Trujillo, asked to guarantee the protection of former military officers who collaborated with the JEP and whose testimony was decisive in locating this mass grave.

The court of this special jurisdiction that investigates the case said that “preliminary indications would indicate that these are men between 15 and 56 years old, residing in Medellin and among whom people with disabilities would be found.” Since the proceedings began last June, the judge has heard 160 versions of uniformed men who voluntarily came to help clarify what happened. Thanks to their stories, nearly 400 victims of extrajudicial executions have been identified.