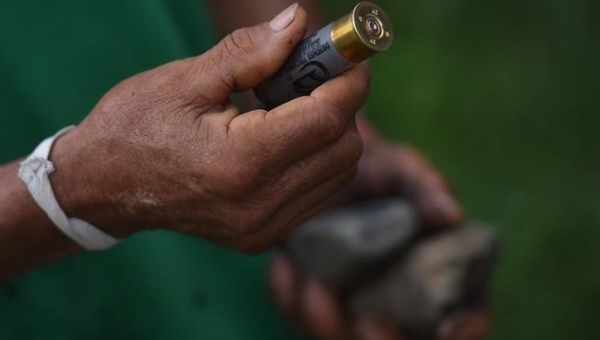 Seven were wounded and one killed during the incident, Cauca state secretary, Ricardo Cifuentes Guzman said.

At least seven people have been wounded and one killed after peaceful protesters were ambushed on the Pan-American highway, Cauca, Colombia Tuesday evening.

Members of the National Indigenous Organization of Colombia (ONIC) were met with police violence during a demonstration against forced evacuations in Augustina. Indigenous communities continued their week of protests, erecting barricades in the road to stall police forces to no avail.

RELATED CONTENT: Panama Asks to Strengthen Guaidó Within the OAS

Rapid gunfire echoed throughout the videos uploaded by Indigenous groups, who turned to social media when violence broke, calling for help from the United Nations and the Colombian government to intercede.

“#ATTENTION| At this time the public force are attacking violently La #MingaSocialSuroccidente. In the Agustina, Cauca, there are several mingueros (Minga Indigenous people) wounded by a firearm. We ALERT HUMAN RIGHTS. @IvanDuque @luiskankui @mindefensa @ONUHumanRights @CIDH,” the ONIC tweeted.

Colombian authorities are blaming armed groups for the attack, although the Regional Indigenous Council of Cauca (CRIC) had already denounced the Mobile Anti-Disturbances Squadron (ESMAD) and the National Army for several violent interventions prior to the shootings.

On its personal website, ONIC reported, “In the afternoon of March 19, in the sector the Agustina the public force ESMAD fires with long-range firearms against the humanity of the mingueros, leaving 3 wounded.”

“The first Manuel Mosquera, the second Weimar Lame and the third the promoter of the medical mission, all wounded by firearms. It is worrisome how the ESMAD fires with the medical mission that provides the service to guarantee the right to life,” the organization said.

“We demand that the Colombian Government and its armed repressive agents comply with the national and international standards that regulate the fundamental right to social and peaceful protest,” they said.

Protests in Cauca have going on for more than a week with demands to talk to president Ivan Duque about the 462 murders of social leaders and human rights activists in Colombia since 2016 as well as constant threats violence, death, and displacement.

Their calls for help on social media gathered attention, as activists and academics rising to carry the banner.

Ana Erazo, a politologist and professor of urban studies, wrote, “Disturbing situation that the (Indigenous) communities are forced to mobilize today for their rights to live. @IvanDuque and @DilianFrancisca repression should not be the answer. #MingaSocialSuroccidente.”

Telesur Correspondent Tatiana Portela tweeted, “More evidence of the war treatment that is giving the Government of @IvanDuque The Social And Popular Minga that is ahead in the department Of Cauca.”