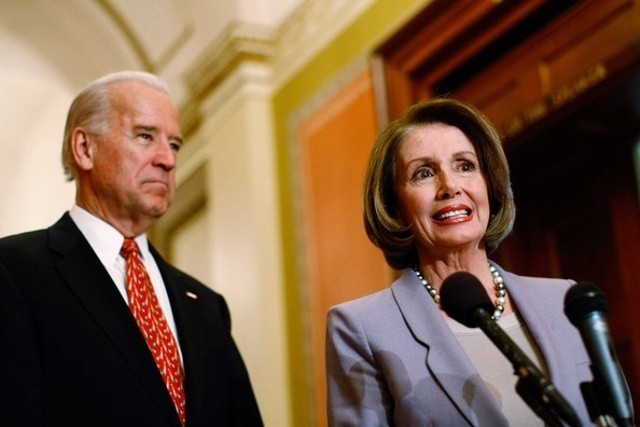 The 1980s appear to be back in vogue these days, and Elliott Abrams is not the only wretched corpse recently exhumed and returned to national political life.

During the Reagan years, US elite opinion was polarized by the Iran/Contra scandal, with Democrats opposing the Republican administration’s effort to arm paramilitary death squads in its terrorist war against the Sandinistas in Nicaragua.

RELATED CONTENT: Truth and Lies in the US Dirty War Against Venezuela

As Chomsky exhaustively documents, the parameters of debate were, however, exceedingly narrow, with even the most “dovish” of Democrats agreeing that the elected Sandinista government must go and supporting the illegal US economic embargo in order to make regime change a reality.

Fast-forward to 2019 and it seems like “déjà vu all over again.”

Despite claiming to be the vanguard of “the resistance,” top Democratic leaders have dutifully fallen in line behind Trump in recognizing self-proclaimed “Interim President” Juan Guaido as Venezuela’s legitimate head of state.

Neither House Speaker Nancy Pelosi nor rumored Democratic establishment 2020 favorite Joe Biden appeared remotely bothered that Guaido won exactly zero votes in a presidential election and that his claim to the country’s highest office is constitutionally absurd, even in the counterfactual scenario that the May 20, 2018 elections were a “sham.”

RELATED CONTENT: The Global Left and the Danger of a Dirty War in Venezuela

Only a tyrant would prevent the delivery of food and medicine to people he claims to lead. The international community must support Juan Guaido and the National Assembly. It is time for Maduro to step aside and allow a democratic transition. The Venezuelan people deserve better.

Just like in the ‘80s, Democrats have few qualms about toppling an elected Global South government with a brazen coup d’état. Rather, their main concern is that Trump will launch a military intervention, which like Iraq, wouldn’t constitute in their eyes a “crime against peace,” but a mere “strategic blunder” that would destabilize the region and harm US interests. Such “dovish” reservations should be treated with extreme skepticism in light of enthusiastic Democratic support for hands-on regime change in Libya and Syria under the Obama administration, with catastrophic consequences.

Let’s be clear: the threat of a US regime change war in Venezuela is real and must be urgently opposed. The recent legislation introduced in the House and Senate seeking to prohibit the use of US military force in the South American country needs mass popular support.

But this is not enough. US sanctions tracing back to Obama’s 2015 national emergency decree are themselves a massively destructive form of warfare, with UN independent human rights expert Alfred de Zayas calling them the 21st century equivalent of medieval sieges aimed at reducing cities to starvation.

With a few notable exceptions, including Elizabeth Warren, Ro Khanna, Ilhan Omar, and Tulsi Gabbard, no prominent Democrat has spoken out against the illegal US economic blockade imposed on Venezuela. These measures include not only financial sanctions enacted in August of 2017 but an effective US oil embargo decreed on January 29, which according to opposition-aligned economist Francisco Rodriguez will cause Venezuela’s economy to contract by total of 26 percent in 2019, devastating the Caribbean nation and killing countless thousands of Venezuelans.

The silence is particularly deafening on the left-wing of the Democratic Party, with Democratic Socialist standard bearer Bernie Sanders yet to publicly condemn US sanctions. This would hardly be a first for Sanders, who backed Washington’s criminal sanctions regime against Iraq in addition to voting for the neocon-inspired Iraq Liberation Act of 1998 that codified regime change as US policy.

To make matters worse, the left-leaning presidential candidate, alongside Warren, Khanna, and Alexandra Ocasio-Cortez, has issued worrying statements questioning the democratic legitimacy of the Venezuelan government despite the fact that Maduro won re-election with a percentage of the total electorate equal to Barack Obama in 2008 and greater than that garnered by Donald Trump in 2016.

“The Maduro government in Venezuela has been waging a violent crackdown on Venezuelan civil society, violated the constitution by dissolving the National Assembly and was re-elected last year in an election that many observers said was fraudulent. Further, the economy is a disaster and millions are migrating,” Senator Sanders said in a press statement.

Here “crackdown,” as in 1980s Nicaragua, should be read as any measure taken by Caracas or any other independent Global South government to counter US-sponsored right-wing violence and economic destabilization.

In the present context, these postures – which are no doubt intended to provide political cover for Sanders and others’ vocal denunciations of regime change as US state policy – ultimately reinforce Washington’s casus belli, namely that in Mike Pompeo’s words, Maduro is a “sick tyrant” who deserves to be overthrown.

We would be remiss if we failed to recognize, as does Norman Solomon, that Sanders, Ocasio-Cortez, and others have taken significant right-wing flak for their refusal to call Maduro a “dictator.” This indeed represents a step forward from 2015 when the Sanders campaign sent donors an email calling late Venezuelan President Hugo Chavez a “dead communist dictator,” which is no doubt a testament to the work of grassroots anti-imperialist movements.

However, what is most pernicious about Democrats’ denouncements of “authoritarianism” in Venezuela is that it amounts to 180-degree inversion of reality, given that Chavistas will likely be the victims of a right-wing US-backed dirty war if Washington’s coup is consummated.

Indeed, as we saw under the short-lived 2002 Carmona dictatorship whose reign of terror left between fifty and sixty anti-coup protesters dead in 47 hours, Venezuela’s opposition, the most radical sections of which are leading the current coup, is dead-set on wiping Chavismo from the Venezuelan political map with terrifying consequences for the 6.2 million people who voted for Maduro on May 20, 2018 and generally for anyone caught “looking Chavista” as Afro-Venezuelan Orlando Figuera lethally discovered exactly one year before.

And who would be the held accountable for the killed in such a US-sponsored dirty war? The short answer is “nobody” given Democrats actual and historic complicity in the crimes of their Republican counterparts, paving the way for the rehabilitation of war criminals such as Elliott Abrams and John Bolton. With few exceptions, Representative Ilhan Omar has been virtually alone in fighting to reverse this imperial culture of impunity, grilling Abrams over his godfathering of right-wing death squads in Guatemala, El Salvador, Honduras, and Nicaragua in the 1980s.

Given his own principled opposition to the Reagan administration’s murderous Central American policy, Sanders has therefore has a special responsibility to stridently oppose regime change in Venezuela and take a clear position rejecting Venezuela’s violent, anti-democratic opposition.

Simply put, any self-identified “socialist foreign policy” is utterly incompatible with tacit support for brutal sanctions and dutiful repetition of CIA talking points regarding “humanitarian aid” and “authoritarianism.” Democratic socialists can and must do better.