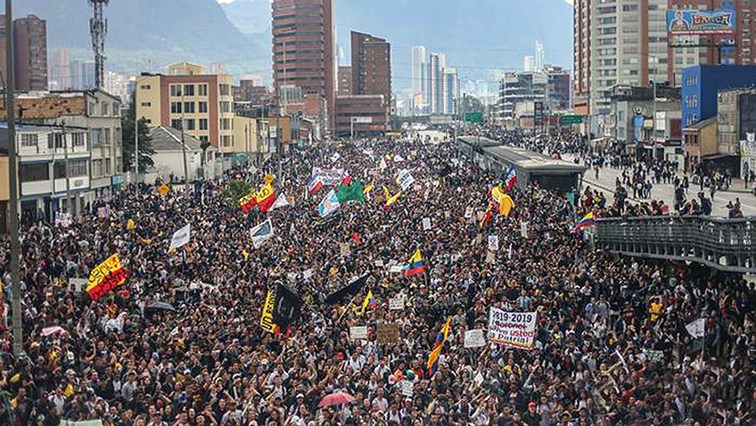 Bogota, the epicenter of Colombia’s protests, is recovering from its first imposed curfew in four decades. The measure was decreed as a response to riots following a mass strike on Thursday, November 21, against the Ivan Duque Administration. The Colombian President ordered soldiers and police officers to continue patrolling the streets of the capital city fearing a contagion from protests echoing throughout Latin America during the last days. He is blaming foreign citizens for allegedly “fostering chaos” in the country.

Since early morning on Sunday, soldiers have kept watch over areas of the center and south of the city on foot, in armored tanks, and on motorcycles; resulting in around 300 people arrested since Friday. The same sectors are being patrolled by police officers and riot control squads. “Patrolling is necessary but it is also aimed at bringing calm and presence to citizens,” Duque said following two days of mobilizations by thousands of Colombians who reject his economic, social and safety policies.

About 13,000 officers patrolled the city during the curfew imposed since Friday at 21 hours and until Saturday at 6 in the morning – the first one in the city since 1977 during another nationwide strike. The rightist President is facing increasing social unrest after 15 months in office. He did not reveal how long the public force would be guarding the streets of this big city.

Ahead of the protests, Duque had already warned that Colombia could be stricken by social turmoil similar to those in Ecuador, Chile or Bolivia. He stated that the current unrest came from some sort of contagion rather than bad government policy, and to underscore that view he expelled 24 Venezuelans accused of trying to foster the protests. Duque claims to be a victim of those who “want to foster chaos” in the country.

But a much different view is shared by major workers’ unions in the country. “Duque’s package of policies include labor, pension and tax reforms, privatizing the State’s productive apparatus and the public financial sector,” noted the National Strike Committee in a unitary statement, signed by the major workers’ unions that convened the strike on Thursday.

Workers’ unions and social movements claim “a broad process of dialog to advance on the transformations is needed in the country” and they also condemn the murder of social leaders and human rights violations carried out by the Duque Administration. According to data from the Bogota-based conflict research organization, INDEPAZ, between the beginning of 2016 and May this year, more than 700 leaders – 150 of whom were from Cauca – have been killed.

Bogota resumed some semblance of normality on Saturday following two turbulent days. Stores opened and transportation started to function again gradually. Nevertheless, some incidents occurred in different mobilizations that were repressed with tear gas. In the main Bolivar square in downtown Bogota, a peaceful demonstration ended up with tens of people arrested.

The conflict will continue again unless the Duque Administration bends to put in place some effective measures or a real dialog with the different sectors sharing grievances towards his adjustment policies dictated by the IMF.