Faced with the avalanche of posts, statements, and evidence about the participation of more than 20 Colombians in the assassination of the president of Haiti Jovenel Moïse, Colombian Defense Minister Diego Molano admitted that in fact those involved are his countrymen, but he tried to distance himself from the atrocious political assassination, even though many see Colombia as the main agent of destabilization in the region and the tool of US imperialism.

In a statement released on local media and social media networks, Molano said that Interpol formally requested data from the Colombian government regarding the subjects captured and identified in Haitian territory as being part of the armed group that killed Moïse inside the presidential residence.

“Initially, the information indicates that they are Colombian citizens, retired members of the National Army,” declared the Minister of Defense of the Republic of Colombia. He added that the police and the army have instructions to collaborate in the investigation in order to clarify the case, but many analysts find the situation hard to believe, particularly because a few weeks ago the head of the United States Central Intelligence Agency (CIA), made an unexpected visit to Colombia and then Brazil.

According to the information supplied to the public by Haiti’s authorities, of the group of approximately 32 mercenaries who participated in the terrorist operation, 26 are Colombians. Haitian police initially captured 15 of them, while another three were killed, and eight escaped. 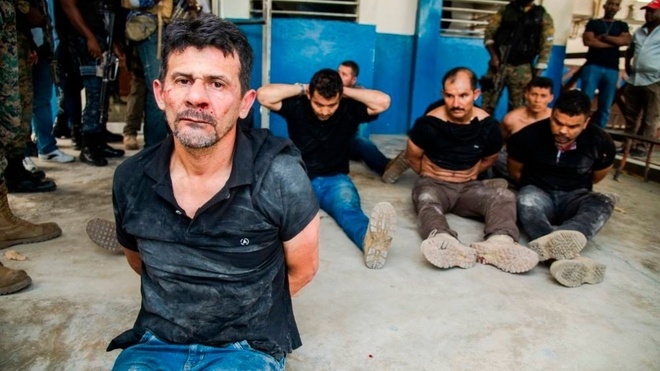 In the context of Colombian mercenaries operating freely in Latin America under the protection of Colombian or United States authorities, the assassination of the FARC-EP guerrilla leader Jesus Santrich in mid-May—allegedly in Venezuelan territory bordering Colombia at Zulia state, and also by a group of Colombian mercenaries under unclear circumstances—sounded alarms for peace activists who view Colombia as a source of violence and destabilization in Latin American and the Caribbean.

Colombian hitmen or international plot?
At the press conference by the Colombian Minister of Defense Diego Molano, the director of Colombia’s National Police, Jorge Vargas, was also present. There he stated that, of the six citizens for whom Interpol requested information, the two who directly perpetrated the assassination of Jovenel Moïse were reportedly killed in Haiti.

The official also added that these two were non-commissioned officers retired from the Army of the Republic of Colombia, while the other four had been soldiers from the same military institution. Felipe Pineda Ruiz, Colombian activist and director of the NGO Somos Ciudadanos, wondered aloud on social media if the “mercenaries” were really retired—one of many doubts raised by the stunning events.

As new details were revealed, reflections emerged regarding the similarity of the assassination with the failed Operation Gideon in Venezuela in May 2020, launched from Colombia with the assistance of the United States to abduct or assassinate President Maduro. In that case, the Colombian Prosecutor’s Office admitted that the planning and organization of this terrorist plot took place in Bogotá, despite several Venezuelan government officials denouncing the preparation of the plot.

For its part, the US government also denied any relationship with the event, after it was made public that at the time of the assault on the residence of Jovenel Moïse, the mercenaries wore vests that identified them as officials of the DEA (US Drug Enforcement Agency), which allegedly helped them get into the presidential residence.

To make the situation more complicated, for many analysts the recent sudden visit of CIA director William Burns to Colombia, and then to Brazil, on a very “sensitive security mission,” hinted at the possibility that a deliberate operation was launched by Bogotá and Washington against the Haitian ruler.

Analysts pointed to the sudden in-person meetings with the top official of the CIA as a sign of something big about to happen, something that they wanted to keep outside of internet or phone calls that could be monitored by intelligence services. For that reason, Burns’ visit to Colombia set off alarm bells in Venezuela, where Washington, Bogotá and Brazilia have been trying for years to oust President Nicolas Maduro.

Jovenel Moïse was a president accused of corruption and promoting paramilitary gangs in his country, in addition to being compliant to US interests, obeying most of US’s instructions including lifting Haiti’s support for Venezuela in the Organization of American States (OAS). In recent months Moïse expressed his desired to strengthen his grip on power by extending his presidential mandate beyond its constitutional limit in February, and by proposing a change in the Haitian Constitution that could have made his term in office even longer, giving rise to a new wave of demonstrations in Haiti. For many analysts, these decisions may have put Moïse in hot water with Washington.