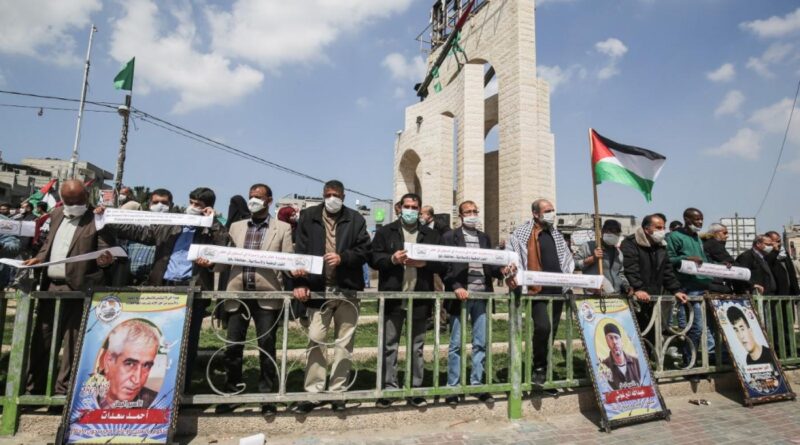 July 24, 2020.- Israel’s Supreme Court has ruled that Palestinian prisoners have no right to social distancing protection against coronavirus.

In a ruling on Thursday, Israel’s top court rejected a petition made by the Adalah legal centre for minority rights, which called on Israel to implement Covid-19 protective guidelines for inmates at Gilboa prison, a facility in northern Israel housing about 450 Palestinians classified by Israel as “security prisoners”.

The Supreme Court justices accepted the argument promoted by Israeli state authorities that Palestinians held in prison were no different than family members or flatmates living in the same home.

Adalah attorney Myssana Morany, in a statement released following the ruling, slammed the court for accepting “the fiction pitched to it by Israeli authorities that Covid-19 social distancing policies – essential for everyone else – are not relevant to the Palestinian ‘security prisoners’ it holds behind bars”.

“Israeli authorities claimed today in court that social distancing policies essential for protecting prisoners serving time for criminal charges are somehow not relevant for ‘security prisoners’. The Israel Prison Service should have stood together with us today and demanded that it be granted the means to protect the people for whose health and safety it holds direct responsibility,” Morany said.

“We were, instead, subject to absurd arguments equating prisons with family living rooms, while prisoners continue to be forced to come into daily contact with guards potentially exposed to Covid-19 outside the prison walls.”

Adalah said that the “precedent-setting ruling” endangers the lives and health of Palestinians held by Israel, and poses a threat to society as a whole.

“[The ruling] flies in the face of health and human rights professionals around the world who have called for social distancing within prisons, and leaves Palestinians held by Israel exposed to the virus with no option to protect themselves,” Morany said.

In April, a group of UN human rights experts called on Israel “not to discriminate against” thousands of Palestinian prisoners facing high-risk exposure to coronavirus, asking the country to release the most vulnerable among them.

There are more than 4,520 Palestinian prisoners, including 183 children, 43 women and 700 detainees with pre-existing medical conditions in Israeli jails, the UN experts added.

In its statement, the UN said Israel had released hundreds of Israeli prisoners due to the pandemic, but refused to release any of its Palestinian inmates.

“This indicates discriminatory treatment towards Palestinians prisoners – which would be a violation of international law,” the UN group said.

At Gilboa prison alone, at least 30 prison guards and seven inmates have contracted coronavirus, while 489 guards and 58 prisoners are currently in quarantine, according to information provided to the court by Israeli state representatives. At least one of the coronavirus patients is also battling cancer.

RELATED CONTENT: Israel Leaks Evidence of Its Involvement in Covert Iran Bombing Campaign that Threatens to Spark a Wider War

While Israel’s Supreme Court has ruled that Israeli prison facilities must guarantee a minimum living space of 4.5 square metres per prisoner, Israel’s prison services have not abided by the ruling, Adalah said.

Conditions in Gilboa prison currently make it impossible for inmates to social distance, with six prisoners housed in each 22 square metre cell, which includes three bunk beds, a shared toilet and a bathroom.

“Under these conditions, prisoners are unable to adhere to [the] Israeli Health Ministry’s social distancing guidelines for preventing the spread of Covid-19, thus endangering their safety and lives,” Adalah pointed out.

Earlier this month, the Palestinian Foreign Ministry launched an international campaign calling on Israel to release Kamal Abu Waer, a 46-year-old Palestinian suffering from both coronavirus and cancer, who is being held at Gilboa prison on multiple life sentences for his role in attacks on Israelis during the Second Intifada.

His health has deteriorated in recent months, following a diagnosis of throat cancer.

Palestinian President Mahmoud Abbas has called on all responsible authorities to wage an “international campaign” to put pressure on Israel to provide Abu Waer with proper treatment and urge his immediate release.

Abu Waer’s case has been raised with the office of the UN secretary-general, the UN’s Human Rights Council and the World Health Organisation (WHO).

Under international humanitarian law, experts say it is illegal for Israel to hold Palestinians from the occupied West Bank, East Jerusalem or Gaza in prisons within Israel, as the law prohibits civilians – including detainees and prisoners – from occupied land to be transferred to the territory of the occupying power. Still, all but one of Israel’s prisons used to hold Palestinians are located inside Israel.