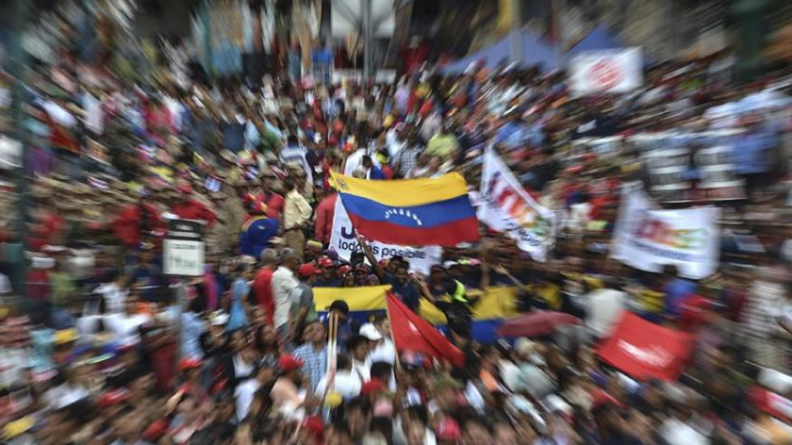 Marco Teruggi, a Caracas‐based political commentator, examines the situation of the Bolivarian Government in the international chessboard.

The dice have been thrown and the game is on in Venezuela. This week has seen the country enter into new uncertain and dangerous terrain, although with some predictable elements. We have witnessed different variables develop, and now wait for new elements that may provoke a reaction or justify an outcome.

The current chain of events seems to have been planned out step-by-step: the attempted theft of weapons by a group of members of the Bolivarian National Guard on the morning of January 21, followed by incidents of violence concentrated in the west of Caracas; US Vice-President Mike Pence’s video supporting Juan Guaidó and calling for demonstrations on January 23; the swearing-in of Guaidó; US President Donald Trump’s recognition of Guaidó a few minutes later; ongoing incidents of violence; the convening of a meeting of the Organization of American States (OAS) to seek recognition of the parallel government; the US$20 million announced by Pence for “humanitarian aid”; and yet more programmed violence.

Not everything went as planned. For now, there are two main variables at play: the international front and the violence.

International front
Regarding the international front, the attempt to get the OAS to recognize Guaidó as president failed, with only 16 votes out of 34. This is not a new failure: the Lima Group (formed in 2017 by right-wing Latin American governments), now weakened by the Mexican government’s anti-interventionist stance, emerged out of a similar situation.

Moreover, the European Union did not formally recognize Guaidó and agreed – an unstable agreement opposed by governments like France – on the need to have new elections in Venezuela.

The axis of the current situation originates and rests in the US, which has called a meeting of the United Nations Security Council for January 26. What kind of debate and agreement will they seek there in terms of the parallel government? The strategy is reminiscent of the way in which the operation to oust the Libyan government was conducted in 2011.

On the second front, a program of violence is underway. The incidents of violence have moved through different poor areas of Caracas: west, south and the outer edges of the east, namely Petare, one of the most populated barrios [poor neighborhoods].

There, particularly in the latter, armed groups have been activated and funded to generate violent actions, seeking to create a big impact in the media. These incidents are scheduled to start at night and are carried out in such a way to enable them to be promoted on social media.

Human rights organisation Surgentes has stated that, “at least 38% of demonstrations were violent, and in 28.5% of them there were confrontations with security forces, with firearms and other substantial elements”.

A Bolivarian National Guard sergeant was murdered, and two members of that institution were beaten up in an attempted lynching carried out in broad daylight, in a zone dominated by the opposition.

In this context, there has been a rising number of deaths of youths in poor areas mobilized by the right. This is a well-known situation: the same method was used in 2017, which at critical points saw Chavista youths burnt alive on the street and attacks on military bases.

This is all part of the escalation of events unfolding in Caracas and other parts of the country, with situations of violence in areas that are not part of the right’s social base combined with demonstrations such as the one on January 23.

This coup strategy integrates different variables: international pressure for recognition of the parallel government and chaos and deaths inside the country. This is the current situation.

What next? One of the planned steps is to activate the parallel government, whose power lies on the international front, though it has no power or impact inside the country.

This could mean economic actions, like attempts to freeze state assets or a takeover of CITGO, the US branch of Venezuelan state oil company PDSVA. These attacks would increase economic hardship and push the economy towards collapse, something that has been sought since the blockades and sabotage began.

Additionally, the opposition is expected to start an operation to bring in the “humanitarian aid” that Pence promised at the OAS meeting. Will this be a Trojan horse?

This set of steps, designed and promoted from outside the country, does not seem to indicate how they expect to oust Maduro — who was democratically elected — from the government.

Violence
When Guaidó has been asked, he has replied that military intervention is “an element of force that is on the table”. Regarding the possibility of a coup by the Bolivarian National Armed Forced (FANB), he said, “it is an element that is always worth considering”.

Guaidó’s strategy, which is part of a larger plan devised from abroad, cannot be carried out without a component of violence. What directions this violence will take remains to be seen.

We know about previous attempts in 2014 and 2017, of what is already at play, and of what they need to achieve their goal. Overwhelmed by his role and his own will for success, Guaidó has extended to Maduro the same offer of amnesty he has said he will give to civilians and the military.

The gap between the announcement of this coup against Maduro and its materialization is still large. The army stated that they “will never accept a president imposed in the shadow of dark interests and self-proclaimed outside the law”.

Defense minister Vladimir Padrino López also stated that they will “avoid a confrontation between Venezuelans; it’s not a civil war, but dialogue that will solve Venezuela’s problems”. This last sentence should be taken with complete seriousness: one of the violent strategies of the coup plan relies on generating clashes between civilians.

The right has repeated that it will neither dialogue nor negotiate. Maduro has stated his willingness to do so, following the declarations of the governments of Mexico and Uruguay.

What then, if there is no dialogue? Venezuela faces a point of no return: that of accelerating attacks on many fronts to oust the elected government by force, and the start of a mass revenge.

Those leading this push reside in the US and, once again, are doing so in the name of freedom.