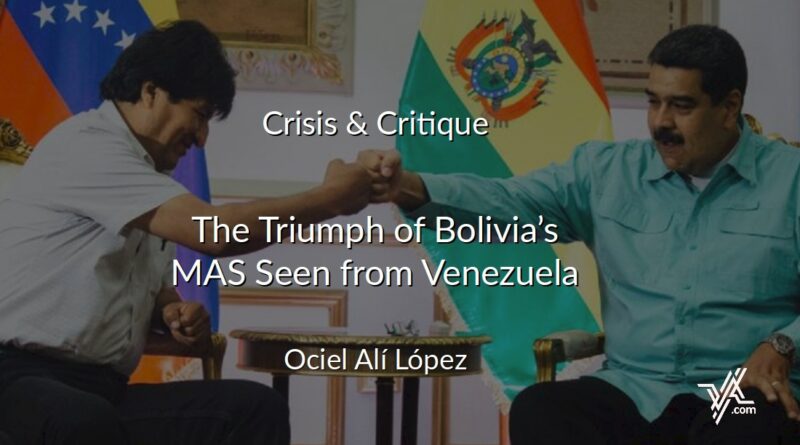 Ociel Lopez investigates the implications for Venezuela of the leftwards shift in Bolivia.

The recent triumph of the Movement for Socialism (MAS) in Bolivia’s elections touched many nerves in Venezuela.

The impact will be felt and will generate political reflection in various spheres of Venezuelan life. The most immediate will be in the geopolitical sphere and, especially, in the ideological balance within the region’s governments, as well as their logic for political action.

In Venezuela, the Bolivian election also generates deep reflection for both the opposition and government, as well as in the heart of the armed forces and within the social movements.

Luis ‘Lucho’ Arce’s victory has once again stirred up sensitivity about Venezuela.

Together with Argentina and Mexico, Bolivia will now be able to help build an alternative vision for the construction of a solution for Venezuela which breaks with the criminalisation and the sanctions imposed by the US and generates concrete aid policies.

Regardless of the outcome of the upcoming US presidential election, the MAS’ triumph tends to balance the scales a little in what has been – given the current correlation of forces between Latin American powers – an uphill battle for the Venezuelan government.

The last two years have seen intense activity against the Maduro government by several important governments in the region, which has generated, among other things, strong sanctions that undoubtedly affect the Venezuelan population.

The coronavirus havoc and the successive defeats of right-wing governments in their quest to overthrow President Maduro, have weakened the region’s willingness to intervene in the country (though not their desireto do so). Equally, they have progressively deactivated several bodies that were constructed to this end, including the Lima Group and the Inter-American Treaty on Reciprocal Assistance (TIAR).

Arce’s triumph can strengthen this trend because his government will look to soften regional contradictions with Venezuela.

On the one hand, the MAS victory further weakens the continental right, which must now assume defeat in a territory considered to have been won for almost a year. One must ask: if the right couldn’t defeat the Bolivian social movements which do not have the firm support of the army or the police, how long will it take to win in Venezuela, where they do?

With the MAS victory, any advance into Venezuela looks farther away and more dispersed.

Another effect which the result in Bolivia will have on the tired continental right is that it shows that the traditional approach of morally sanctioning a government is not necessarily enough to overthrow it. With this, the Bolivia case only proves that the same tactic has been tried against Chavismo with more or less similar results. We only have to remember the early years of the Chavista governments, when Chávez was overthrown and ended up returning [in 2002], only to go on to electorally crush his opponents [in 2004] and consolidate his political power.

In addition, Bolivia may now be able to mediate and strengthen the relationship between Maduro’s government and progressive administrations which have been shy to show support for the lifting of the economic blockade (such as Mexico and Spain), or which have spoken out against it because of human rights issues (such as Argentina).

Bolivia can work to articulate between these governments on issues such as direct aid or a joint policy that transcends the tragic panorama which has emerged in Venezuela. This may point towards breaking the economic blockade and end up eliminating the Washington imposed consensus regarding the need to intervene militarily in the country. It may also help overcome the US’ insistence in preventing the opposition from participating in elections and the invention of an interim government that ends up taking an imaginary form and from which the United States will soon have to detach if it wants to have any real impact.

In this sense, it will be important to keep an eye on the first steps of the Arce government with regard to international alliances. Acting President Jeanine Añez immediately broke off relations with Venezuela [in 2019] and excluded Bolivia from the Bolivarian Alternative for the Americas (ALBA). Arce has already announced that his government will resume relations with the governments of Venezuela and Cuba, and the likely return to ALBA will reinforce an organisation that has always defended Venezuela.

RELATED CONTENT: US Sanctions on Venezuela Are Deadly — and Facing Mass Resistance

Impact on the Venezuelan opposition

Another consequence of the MAS triumph is in the Venezuelan opposition, which sees itself reflected in Bolivia’s very well-considered right, and which is now characterised by an overdose of arrogant supremacy followed by a depressive hangover.

Never have both right wings looked so similar, and they do so because of their defeats.

The Venezuelan opposition should now understand that had it overthrown Maduro through violent whims, as was attempted with the 2014 and 2017 street violence, the April 30, 2019 coup, or the Guaidó uprising, it could also have provoked a counterproductive result in a similar vein to how Bolivia’s racist right took the presidential palace and ended up getting ridiculed at the polls.

Any political triumph, however grandiloquent it may seem (as was [right wing leader and losing presidential candidate Luis] Camacho and Añez’s assault on power), can end up being ephemeral and rather magnify the popular response, as happened in April 2002 in Caracas and as happened on Sunday in Bolivia. April 13, 2002, as a response, is a ghost for Venezuela’s hard-right opposition. Arce’s triumph has brought this back to the fore.

Añez and Guaidó are now reflections of each other. While the former formed a real government, it has now been shown to be no more than a simulation very similar to that formed by Guaidó. The resulting consequence is a transition to socialism, again. Any hypothetical non-electoral triumph for Guaidó could have similar results.

The election in Bolivia troubles conservatives because it represents a setback in a territory which they conceived to have won due to the design of a coup plan based on the “cease the usurpation, transitional government, free elections” mantra, which did not work in Venezuela as it did in Bolivia because of the opposition divisions.

This thesis has just fallen apart. If the right wants to topple President Maduro or President-elect Arce, they’ll have to draw up another plan. This is also true for any of the currents that achieve victory on November 3 in the US.

The lesson of the Bolivian case is that the criminalisation of a movement is not enough to defeat it electorally, and even more so if the radical right takes over with its racist and exclusionary discourse. This was not a good electoral strategy neither for Bolivia nor for Venezuela.

Impact on the Venezuelan government

Arce’s triumph can also help in another way, by trying, along with other progressive countries, to pull the Venezuelan government out of its defensive trench and facilitate the activation of a dialogue that generates real ways out of the crisis.

It can give confidence to the besieged Maduro government, which may in turn open to Argentinean criticism, for example, and understand that, as a country that is suffering the onslaught of geopolitical confrontation, it requires international support for a serious and responsible negotiation process.

Bolivia’s triumph is also a teaching to the Venezuelan government about trusting the people and the elections, as well as the possibility of renewal of government and leadership. Equally, it shows how a long government tenure does not guarantee the exercise of power.

Arce represents not only the return to government of Bolivia’s social movements, but also a renewal of leadership and of internal democracy. This is much needed in Venezuela if Chavismo wants to remain as the most important popular and electoral force in the country.

Bolivia’s example teaches social movements patience and perseverance and the need to fight for internal democracy within Chavismo, which would allow choosing leaders, evaluating current state officials, shaking up bureaucracy, and challenging the neoliberal forces that command from within.

Reflections will also be made by the Venezuelan armed forces.

The Bolivian armed forces are currently tarnished and badly affected for having participated in a coup that, as confirmed on Sunday, was resoundingly unpopular. Now, they will need an internal purge in an effort to re-weave a relationship with Bolivia’s indigenous and socialist groups. The Venezuelan armed forces, which have been very careful not to fall into the provocations of the international right, will surely tend to strengthen their position.

In any case, the slip from the Bolivian military and police only makes us remember that, in the Venezuelan case, these forces are one of the main strengths of the Maduro government.

Arce’s inauguration and the end of the typical post-election honeymoon will come, and only then will we be able to assess the strength of the new government – how it rebuilds the political map and its relationship with the coup-mongering factors of the army, police, and right-wing political parties.

Featured image: What implications does the MAS triumph in Bolivia have for Venezuela? Ociel López takes a look in his latest column. (Prensa Presidencial / Venezuelanalysis)