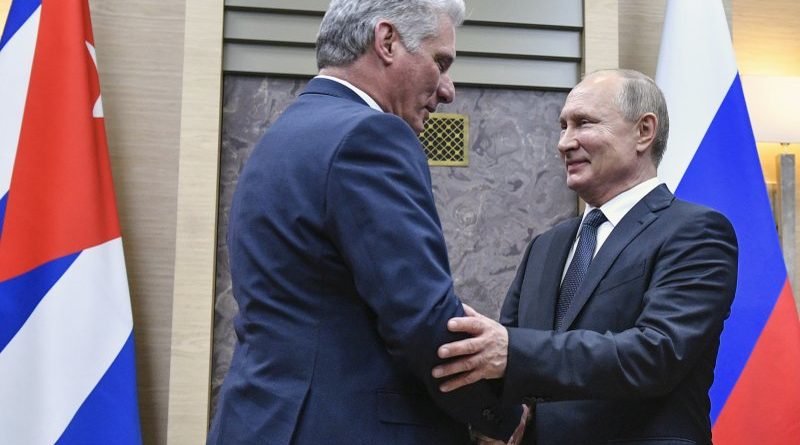 Medvedev visited Havana on Oct. 3-4 where he was received by the ex-president and leader of the ruling Communist Party of Cuba Raul Castro.

Cuban President Miguel Diaz-Canel met with Russian Prime Minister Dmitry Medvedev Tuesday in order to address a series of joint ventures across key areas that will strengthen cooperation between both countries.

“We were able to address many important issues and even formulate many new ideas, which I hope we can develop and promote during your current visit, both during our meeting and during your negotiations with President (Vladimir) Putin,” Medvedev said upon receiving Diaz Canel, who traveled to Russia with a large Cuban delegation.

During the diplomatic visit, the Russian PM and Diaz-Canel penned eight agreements covering key sectors such as economy, investment, transport, customs and culture, among others.

RELATED CONTENT: US Bans Flights To All Cuban Destinations Except Havana

Both governments agreed to strengthen their strategic partnership between private and public sectors in order to support energy, agriculture, technology and digital development projects in Cuba.

Medvedev, who said Tuesday he had good memories of that visit to the island, also congratulated Diaz-Canel for being appointed president of Cuba, and sent greetings to Raul Castro, according to the Interfax and TASS agencies.

He also invited the Cuban president to Moscow to attend the military parade on May 9, 2020, at the Red Square for the 75th anniversary of Victory Day, which marks the defeat of Nazi Germany in World War II.

“We are waiting for you in Moscow on May 9 next year on the occasion of the 75th anniversary of the victory. This will be a good opportunity to compare our positions and continue our talks,” Medvedev said.

Diaz-Canel, who passed on special greetings from Castro to Medvedev, said that Cuba has actively studied and worked on Russia’s proposals and was ready to address them in detail.

“Your visit (Medvedev’s) was of particular importance, not only because we could evaluate the results of joint programs with Russia for our socio-economic development until 2030, but you came with an array of ideas that can be translated into projects,” the Cuban president said.

“We visited the Baltic plant where ice-breakers are built, and our energy minister visited the Leningrad Nuclear Power Plant. Banking organizations are working with their partners,” Diaz-Canel said.

Diaz-Canel is traveling with the vice president of the Council of Ministers, Ricardo Cabrisas; the chancellor Bruno Rodriguez; with the Ministers of Foreign Trade and Foreign Investment, Energy and Mines, Transportation and Agriculture, among others, according to a statement from the Presidency’s office.