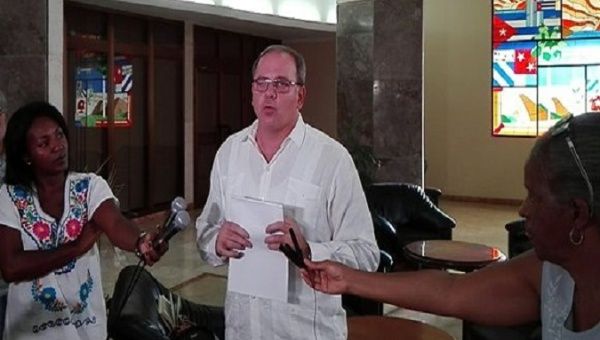 Foreign Minister Bruno Rodríguez demanded the immediate release of Cuban doctors detained in the plurinational state, after the coup against Evo Morales, including the chief of the Cuban Medical Brigade.

The Cuban Government denounced the arbitrary detention of the chief its the Medical Brigade in Bolivia, Yoandra Muro Valle, as well as of Jacinto Alfonso Pérez, in charge of logistics of the group, said Eugenio Martínez Enriquez, General Director for Latin America and the Caribbean of the Ministry of Foreign Affairs the island.

In a press conference, the diplomat called on the authorities of the Plurinational State to preserve the lives of Cuban collaborators in that nation.

“There has been and we have observed with consternation a manipulative approach that highlights the idea that Cuban collaborators encouraged the protests that are taking place in Bolivia”, Martínez Enriquez stated. Furthermore, he explained that police from Interpol Bolivia went to the home of the head of the medical brigade there and without legal reason arrested her at the moment. “Curiously, a car from the United States embassy was parked near the house.”

RELATED CONTENT: “Satan, Out of Bolivia” – The Ritual of Camacho and his Sect

The Cuban representatives also informed that authorities of the Latin American nation have not yet responded to this situation and that the actions of the Cuban embassy do not cease to clarify these facts.

Martínez Enriquez recalled that these incidents have been happening in the last few hours, and recounted what happened the day before in Santa Cruz, “when a coronel in front of television cameras went to the home of one of our collaborators to respond to the alleged complaint of some neighbors of weapons possession”.

These actions occurred without any court order and the belongings of the collaborators were requisitioned. “They found nothing and so they had to recognize it in front of television cameras that was watching this show against the Cuban collaborators,” acknowledged the Cuban diplomat.

Before previous information was released, the Government of Cuba demanded the cessation of harassment against the health workers that collaborate in Bolivia, as well as the immediate release of four of them, arrested after the coup against inidigenous leader, Evo Morales, last Sunday November 10th.

In an official statement, the Cuban Foreign Ministry explains that the four members of the Medical Brigade were traveling on November 13th in El Alto, with money taken from the bank to pay for basic services and rentals. However, they were arrested under the alleged argument that the money would be used to finance protests that rejected the coup d’etat.

#Cuba demands that the instigation of violence against health workers in #Bolivia cease Declaration of @CubaMINREX..

“The representatives of the police and the Public Ministry, visited the headquarters of the Medical Brigade in El Alto and La Paz and confirmed, based on documents, payrolls and bank details, that the amount of money coincided with the amount regularly extracted every month,” the statement explained.

After the fact, details the Cuban Foreign Ministry, a series of accounts in social networks of doubtful origin began a campaign to incite violence against health personnel. “In the circumstances described, the immediate return to the Homeland of the Cuban collaborators has been decided,” the document said.

Despite corroborating the information, the four Cuban citizens remain in prison and in constant communication with representatives of their country’s embassy in Bolivia and other members of the health brigade.

Amid the coup against President Evo Morales, right wing groups have persecuted militants and followers of the Movement to Socialism (MAS), as well as Cuban journalists and collaborators.

Cease the exacerbation of irresponsible anti-Cuban expressions and hate, lies, defamations and instigations to violence against Cuban cooperators, who have given their solidarity contribution to the health of that brother Bolivian people.

Last Sunday, the Bolivian president presented his resignation, along with Vice President Álvaro García Linera, with the intention of avoiding a violent onslaught in the nation. However, repression and persecution has not ceased.

Meanwhile, social organizations remain mobilized to reject the coup d’etat and promising that they will not stop their actions until Morales returns to power.

The first indigenous president is in exile in Mexico, from where he calls for a national dialogue that allows the institutionalization of the country to be restored.