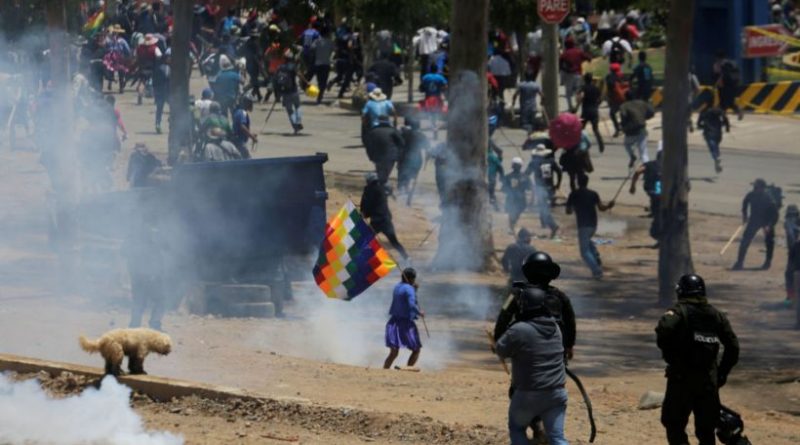 The repression took place in Sacaba municipality, where more than 60 coca growers were also injured

Seven coca producers were killed as a result of the military-police repression in the Bolivian department of Cochabamba, said the coca union radio Kawsachun Coca, citing the medical reports.

In addition, it left a total of more than 60 injured.

The murders of coca growers came within the framework of the protests against the coup in Bolivia, where a de facto government was formed, headed by the senator and now self-proclaimed president Jeanine Áñez.

In this way a massacre was consummated in Cochabamba, in which security forces used firearms against the population.

The Ombudsman of Bolivia expressed its “alarm and concern” about what happened and urged an investigate “if the actions of both forces (the police and the armed forces) were framed within what is established by the Political Constitution of the State and international protocols of respect for human rights.” He also demanded “an immediate investigation to clarify the circumstances in which the deaths and injuries occurred.”

“Remind the current government that announced that its transition would seek the calming of the country and would be framed in the call for an electoral process; however today the Bolivian people must regret (…) deaths that add up to the 13 counted by the institution during this conflict,” said the agency.

The Kawsachun Coca broadcaster said that all deaths had been caused by bullet impacts.

Cocaleros’ leaders reported on social networks that they were also attacked by air, spreading images of flights of a fighter plane, at least one helicopter and even a drone.

The massacre, which took place in the municipality of Sacaba, a point of arrival in Cochabamba from the coca-producing region of Chapare, coincided with an announcement by Áñez that she will issue “constitutional measures” to confront those she defined as “armed subversive groups” behind the persistent protests against her presidential assumption.

The repressed mobilization was part of the protests called by the Unity Pact, a group of indigenous peasant trade union organizations, which in a statement highlighted : “We demand the immediate resignation of the self-proclaimed Acting President of the State, for being illegal, unconstitutional and in her self-proclamation having violated the Constitution and General Regulations of the Senate.”

There were also protests where there were outbreaks of violence against protesters, mostly indigenous, such as in La Paz, the political capital of Bolivia, but also in Beni (north), Oruro (center) and Potosí (south).

Evo Morales, who before being president was a cocalero union leader, condemned the deaths of his brothers.

For his part, Foreign Minister Arreaza expressed his repudiation of military-police repression against coca growers and indigenous people.