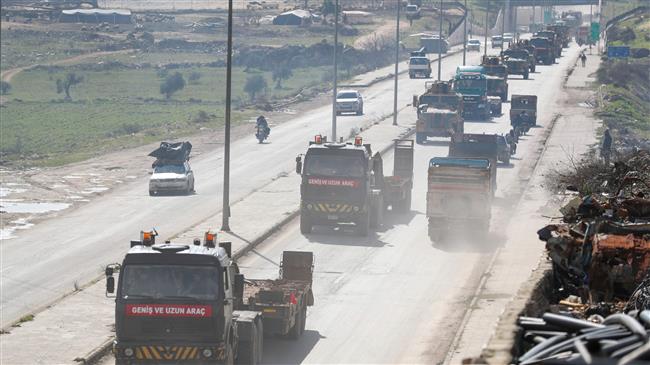 The Syrian government has strongly condemned Turkey’s deployment of more military reinforcements to militant-held areas in the country’s embattled northern provinces of Idlib and Aleppo, emphasizing that such actions will fail to save terrorist groups that are targeting civilians in the war-ravaged Arab country.

“The Turkish regime continues its aggression against the sovereignty and integrity of Syrian lands through further deployment of forces to Idlib and its countryside as well as Aleppo countryside, targeting populated areas and some military points in a bid to save its proxies from terror outfits who have been defeated in the wake of Syrian army advances,” an unnamed official source at the Syrian Ministry of Foreign Affairs and Expatriates told Syria’s official news agency SANA on Tuesday.

Syria renews categorical rejection of any Turkish presence on its territories https://t.co/CQkP0X6AHW pic.twitter.com/NAfvSrMIWs

The source added that the Damascus government categorically rejects any Turkish military presence on the Syrian territory as it constitutes a flagrant violation of international law, a blatant aggression on the Syrian sovereignty, contradicts the terms of Astana and Sochi agreements regarding the de-escalation zone in Idlib, and Turkey’s persistence to ignore its obligations and act out of law.

The diplomat then called on the international community to take necessary steps to stop Turkey’s hostile behavior and its unlimited support for terrorism in Syria and Libya.

“Such acts of aggression will not succeed in saving terrorist organizations as the Syrian Arab Army will continue to pursue their members until they are completely eliminated, and every inch of the Syrian territories is retaken,” the source pointed out.

Meanwhile, President Recep Tayyip Erdogan said on Tuesday that Turkey will soon announce a series of new steps against the recent attacks on Turkish soldiers in Syria’s Idlib province.

Speaking at an award ceremony at Bestepe National Congress and Culture Center in the capital Ankara, Erdogan said Damascus will pay a heavy price for targeting Turkish troops in Idlib.

“We have given the necessary response and retaliated in kind but this is not enough,” the Turkish president said, adding that he will share the details of the steps on Wednesday.

Russia: All attacks on Syrian and Russian forces must stop

Separately, Russia stated on Tuesday that all attacks on Russian and Syrian government forces in Syria’s Idlib province should stop, and that agreements it had struck with Turkey on the conflict had to be upheld.

“At the moment, we consider the most important thing is the implementation of… agreements (between Russia and Turkey)… and of course the suppression of any terrorist activity directed against the Syrian armed forces and Russian military facilities,” Kremlin spokesman Dmitry Peskov told reporters in Moscow.

“We consider such sorties from Idlib unacceptable,” the senior Russian official noted.

Peskov also said there were no plans currently for President Vladimir Putin and his Turkish counterpart to hold face-to-face talks on Syria, but stated that such a meeting could be arranged quickly if need be.

Featured image: A Turkish military convoy of tanks and armored vehicles passes near the northwestern Syrian city of Idlib, near the Syria-Turkey border, on February 8, 2020. (Photo by AFP)