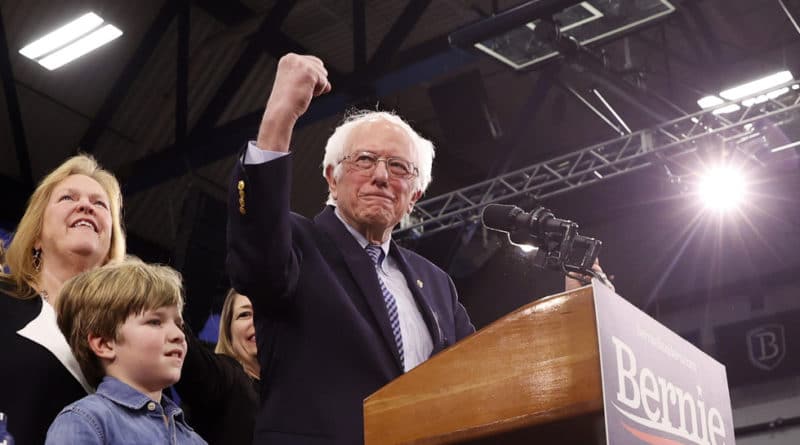 Senator Bernie Sanders has come on top of the Democratic field in the hotly-contested primary in New Hampshire on Tuesday, with South Bend’s mayor, Pete Buttigieg, finishing second, projections show.
The Vermont Independent has claimed victory in the New Hampshire primary after multiple outlets called the vote in his favor.

Addressing his supporters in Manchester, New Hampshire, Sanders described US President Donald Trump “as the most dangerous president in the history of this country,” vowing to stop him from keeping the Oval Office for four more years.

“This victory here is the beginning of the end for Donald Trump,” Sanders said to cheers from the audience.

Sanders, who formally requested a partial review of last week’s Iowa caucuses, mired with chaos and reported irregularities, said in his victory speech that he “won last week in Iowa” as well.

Sen. Bernie Sanders: "The reason that we won tonight in New Hampshire, we won last week in Iowa, is because of the hard work of so many volunteers." #BernieforNH #NHprimary2020 pic.twitter.com/uzA7tuFvMi

Buttigieg, the official winner of the Iowa primary, meanwhile, is projected to land on the second spot this time, with Minnesota Senator Amy Klobuchar rounding out the top three.

Taking the stage, Buttigieg appeared to have conceded the defeat, congratulating Sanders on his strong performance at the polls.

“I admired Senator Sanders when I was a high school, I respect him greatly to this day, and I congratulate him on his strong showing tonight,” he said.

With some 82 percent of the precincts reporting, Sanders was in the lead with 26 percent of the vote, with Buttigieg trailing behind with 24 percent. Klobuchar was in clear third with 20 percent.

Both Sanders and Buttigieg are set to earn 9 delegates in New Hampshire, with puts South Bend’s mayor into the position of an early frontrunner of the race with 23 delegates total. Sanders has so far won 21 pledged delegates.

The results of the vote came as a another blow for establishment favorite former VP Joe Biden, who scrapped the New Hampshire primary party and flew to South Caroline in a bid to breathe new life into his so far listless campaign.

Neither Biden, nor another Democratic presidential contender, Senator Elizabeth Warren, are projected to receive any delegates in New Hampshire.