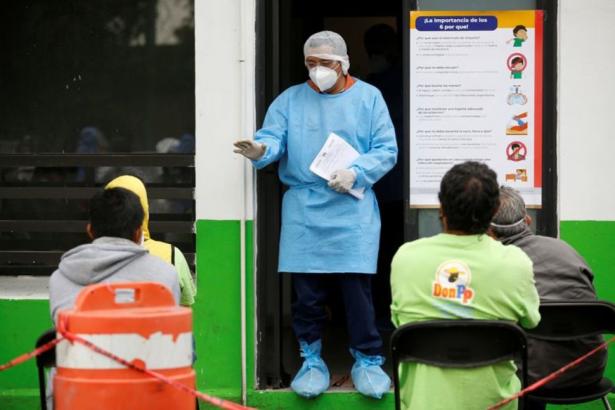 Powerful interests, both national and international, are attempting to use the COVID crisis as a means to step up their campaign against Mexican President Andrés Manuel López Obrador (AMLO).

MEXICO CITY — The Mexican government is not reporting hundreds, possibly thousands, of deaths from the coronavirus in Mexico City, dismissing anxious officials who have tallied more than three times as many fatalities in the capital than the government publicly acknowledges, according to officials and confidential data.

Sounds damning — until we get around to asking the obvious question: “What confidential data?” Unfortunately, the piece never says. We simply have to believe on faith that the New York Times is sitting on confidential data to buttress its case that we don’t get to see.

In some hospitals, patients lie on the floor, splayed on mattresses. Elderly people are propped up on metal chairs because there are not enough beds, while patients are turned away to search for space in less-prepared hospitals. Many die while searching, several doctors said.

As you read this, you’d be forgiven for thinking that the country’s health service was just fine until COVID came along to screw it up. The sad fact is, this has been the state of public hospitals in Mexico for decades, thanks to the dilapidation of healthcare infrastructure and the ransacking of budgets, materials, and supplies by a succession of neoliberal governments. The context is important, because without it, there’s no way of being able to distinguish between the long-term assault on the nation’s healthcare system and the current effects of COVID. For Mexico City as a whole, moreover, beds with ventilators were at 64% capacity on Friday, the day the article was published. Aside from its anecdotal vagaries, if the Times has data to counter this information, it should publish it.

“It’s like we doctors are living in two different worlds,” said Dr. Giovanna Avila, who works at Hospital de Especialidades Belisario Domínguez. “One is inside of the hospital with patients dying all the time. And the other is when we walk out onto the streets and see people walking around, clueless of what is going on and how bad the situation really is.”

Avila is the only doctor on the ground to be quoted, and his hospital the only one to be mentioned. And while the quote is indeed unfortunate, it could apply to the state of public hospitals every day in the most critical areas in the country (Iztapalapa, where the hospital in question is located, is one of the poorest and most violent districts in Mexico City). Also, as Jorge Gómez Narredo points out, the quote has nothing to do with the government hiding statistics, purportedly the central argument of the piece. In fact, not one person in the piece goes on record saying that the government is doing this.

But the government did not respond to questions about the deaths in Mexico City. It also denied repeated requests by The Times over the course of three weeks to identify all deaths related to respiratory illnesses since January, saying the data was incomplete.

The insinuation here — that the government is hiding COVID death data under the names of other respiratory illnesses such as “atypical pneumonia”— has been a favorite talking point of the Mexican right since the beginning of the crisis. A number of supposed instances of this practice have been brought up and subsequently disproved. And Dr. Hugo López-Gatell, subsecretary for health prevention in the Health Ministry and the government’s point person on COVID, has gone on record as saying that all cases of pneumonia will be assumed to be COVID-related unless shown to be otherwise. (Incidentally, given Dr. López-Gatell’s media visibility, I find it highly unlikely the Times could not have procured an interview with him had they wanted one.)

One former health secretary, José Narro Robles, has accused Mr. López-Gatell of lying to the people of Mexico. And some state governments are beginning to draw similar conclusions: that, much like Mexico City found, the data presented by the government does not reflect reality.

Two very important things to mention here. Number one: until last year, José Narro Robles was a member of the PRI, the opposition party to López Obrador. And not just any member, but one who aspired to be the president of the party and even flirted with the idea of an independent run for the presidency in 2018. As health secretary under Enrique Peña Nieto, he was part of an administration that left over 300 hospitals abandoned and incomplete. In short, hardly an objective authority. But Ahmed seems to be banking on the fact that most people outside of Mexico won’t know who he is (why would they?) in order to set him up as a legitimate commentator on the situation. Within the country, mentioning Narro was seen as a giant joke.

Number two: it is state health departments (including Mexico City, which is also a state) that send their COVID data to the federal government. Nowhere is this key fact noted in the article, which would leave you to believe that the federal government compiles its own data separately from the states.

In Mexico City, the doubts started a month ago, when the city’s mayor, Claudia Sheinbaum, began to suspect that federal data and modeling on the epidemic were flawed, according to three people with knowledge of the matter.

She had already instructed her staff to call every public hospital in the Mexico City area to ask about all confirmed and suspected Covid-19 deaths, the people said. In the last week, that effort found that the deaths were more than three times what the federal government reported.

The disagreements have taken place largely behind the scenes, as Ms. Sheinbaum, who declined to comment for this article, has been loath to publicly embarrass President Andrés Manuel López Obrador, her close political ally. The city and the federal government continue to work together on a number of fronts, including getting ventilators.

Translation: the Times was unable to get anyone to go on the record to confirm this titillating bit of gossip. What they did get are three unnamed people “with knowledge of the matter.” Were they privy to the supposed conversations? Having “knowledge of the matter” does not even imply they were present in person.

But the data from Mexico City calls into question the federal government’s grasp of the crisis in the country.

Ah, the data, again. Where is it? And where, by the way, are all the dead bodies? Because if what the Times is saying is true, there are at least 1,800 dead bodies (2,500+ minus the 700 acknowledged) floating around Mexico City unaccounted for. Unless they were all conveniently reported as deaths from something else, that many bodies would be hard to hide. Ahmed and his team, however, do not appear to have found them.

One big reason for the competing death tolls in Mexico has to do with the way the federal government is testing, vetting and reporting the data. The official results include a two-week lag, people familiar with the process say, which means timely information is not available publicly.

More worrisome, they say, are the many deaths absent from the data altogether, as suggested by the figures from Mexico City, where the virus has struck hardest of all. Some people die from acute respiratory illness and are cremated without ever getting tested, officials say. Others are dying at home without being admitted to a hospital — and are not even counted under Mexico City’s statistics.

We have now moved from “people with knowledge of the matter” to “people familiar with the process.” Moreover, the idea of a two-week lag is supremely misleading. COVID figures, as reported by the states, are updated daily. There are also a number of suspicious cases in which testing could not be performed: in the cases of patients who arrived at hospitals in critical condition, for example, who died shortly after. For these suspicious cases, a technical commission goes over the patient’s clinical file in order to make a determination as to whether the death was caused by COVID. Only in those cases is there a lag.

“Their model is wrong,” said Laurie Ann Ximénez-Fyvie, a Harvard-trained Ph.D. at the National Autonomous University of Mexico, adding that symptomatic and severe cases could be significantly higher. “There is very good consensus on that.”

However reasonable the “Harvard-trained” Ph.D. (thank you for the clarification) sounds here regarding the supposed consensus that exists on the government’s model being flawed, Ximénez-Fyvie does not always strike precisely the same tone. In an op-ed published in the newspaper Reforma on May 5 entitled “The Fiasco of the Century,” she wrote: “Sooner or later the accounts will come due. History does not tend to treat kindly those scientists who, in favor a misunderstood common good and lacking the ethics their profession demands, sacrifice or risk the lives of people. Perhaps the case of Josef Mengele comes to mind?” Now call me crazy, but I would contend that someone who has publicly compared the federal government’s COVID czar to a Nazi killer is not precisely the ideal person to be commenting on its modeling strategy. Although she is “Harvard trained,” after all.

In short, undisclosed data, lack of context, the omission of key facts, innuendo, and a raft of either anonymous or hyper-partisan sources: the perfect cocktail for a piece no professor of journalism could give a passing grade. It may very well be the case that the Mexican government is underestimating the number of actual COVID deaths— López-Gatell himself has said as much. But this piece, in its aim to discredit the government by whatever means necessary, winds up discrediting itself far more.

P.S. It is to be noted that, in 2017, Azam Ahmed published a shamelessly favorable puff piece on the front page of the Times on Claudio X. González, the former head of Kimberly Clark Mexico and his son, Claudio X. González Guajardo. The piece, hardly more than warmed-over PR, breathlessly managed to call González Sr. “ a corporate chairman revered in Mexico” and “one of Mexico’s most venerated — and wealthiest — figures in the business world.” As the online news commentary program Rompeviento TV pointed out last year, Ahmed is friends with Darío Ramírez, the General Director of Communications of the organization Mexicanos contra la corrupción y la impunidad (Mexicans Against Corruption and Impunity), whose president is Claudio X. González Guajardo. Both González father and son are among the fiercest opponents of AMLO. While I am not suggesting that direct corruption or a quid pro quo was at play in yesterday’s COVID story, I do consider it pertinent to point out the circles the Times correspondent in Mexico runs in. Outside of those circles, I can assure you, neither Claudio X. González nor his son is revered or venerated.

Kurt Hackbarth is a writer, playwright and journalist. English/espagñol. Writes on Mexico for Jacobin Magazine. Other bylines: The Nation, Revista Global, Animal Politico.

Featured image: A doctor talks to workers of the Central de Abastos, one of the world’s largest wholesale market complexes, while waiting to be checked for the coronavirus disease (COVID-19) outside a doctor’s office, in Mexico City, Mexico May 11, 2020., REUTERS/Gustavo Graf