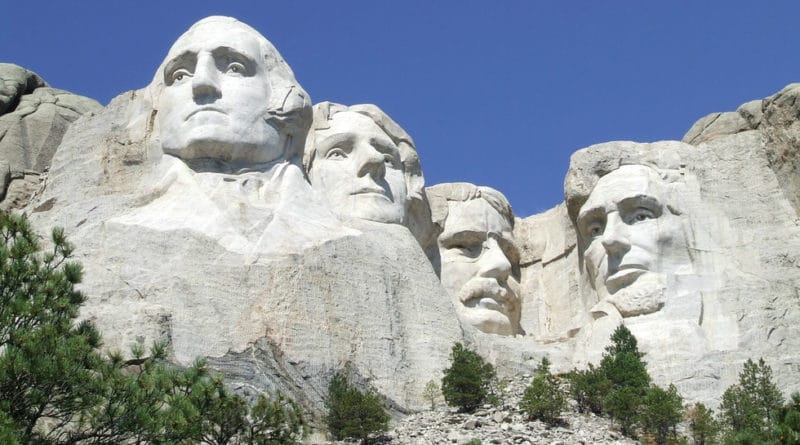 The Democratic Party has provoked a collective eye roll on Twitter after blasting the president for an upcoming rally at Mount Rushmore, saying it would honor “white supremacy” on sacred native land. The tweet was quickly nuked.

The Dems’ latest hot take on Monday night stood for only moments before it was sent down the memory hole, though by then it had already been preserved for eternity on an internet archive site. The hot-button tweet said President Donald Trump had “disrespected Native communities,” and would do so again by holding his July 4th rally at Mount Rushmore, which it deemed “sacred” to some Native American tribes.

The now-deleted post sent critics into a fury, interpreting the message to say that both the iconic American monument and Independence Day itself are celebrations of racism. Among those to wade into the fray were Trump’s own campaign team, as well as the GOP’s national spokesperson, Elizabeth Harrington, who put a challenge to Democratic nominee Joe Biden.

To stop this insanity, you have to vote on November 3rd. pic.twitter.com/KhYXHLLqom

If you support America's founding and our heroes throughout our history you're now "glorifying white supremacy"?

This is insane, historically illiterate nonsense.

When will Joe Biden condemn his own party's hatred of America? pic.twitter.com/NeK5iCIPAV

All the Republicans have to do is run on a “Hey, at least we’re not the Democrats” platform. https://t.co/U9WOVmTwnz

One Trump campaign staffer noted that a number of high-profile Democrats – as well as Vermont Senator Bernie Sanders, an independent who caucuses with the Dems – had each visited the monument themselves, showing no signs of disapproval at the time.

Conservative pundit Jack Posobiec directed his criticism in another direction, taking aim at Republican lawmakers and suggesting they might adopt the same progressive-friendly position if asked (‘NeverTrump’ Senator Mitt Romney was put up as a likely candidate).

If the Senate GOP were asked about Mt Rushmore would they call it white supremacist too?

Some netizens on the other side of the political spectrum have taken up the argument against the massive monument, however, noting that the site has religious significance for the Lakota and that it honors presidents who “perpetuated genocide” against Native tribes.

Mt. Rushmore is literally a mountain of colonizers and slave masters carved into a sacred indigenous mountain and that’s on settler colonialism sir https://t.co/bp7QdkfqJa

A site sacred to the Lakota was not only blown up, but it was designed by a member of the Ku Klux Klan in honor of presidents that all supported & perpetuated Indigenous genocide.

And folks wanna say calling Mt Rushmore racist is a bridge too far.https://t.co/nKPbarTrNd