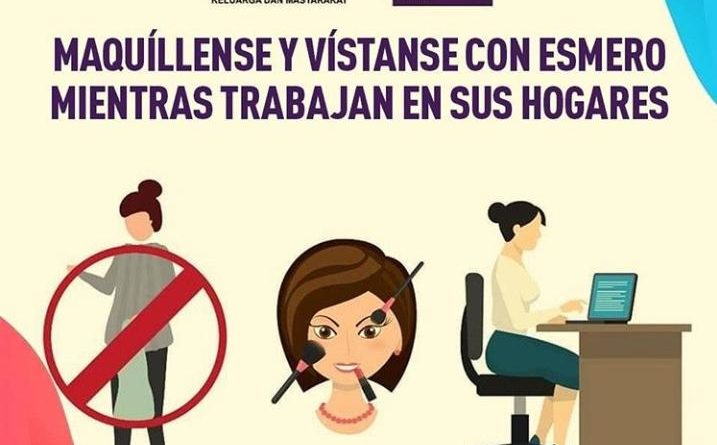 “How did we go from preventing baby dumping, fighting domestic violence to some sad variant of the Obedient Wives Club?”

Malaysia has the largest number of COVID-19 cases in Southeast Asia with more than 2,900 and counting. This week, Malaysia’s government also had a serious public relations issue after an ill-conceived plan went online.

Malaysia’s Ministry for Women, Family and Community Development issued a series of online posters on Facebook and Instagram with the hashtag #WomenPreventCOVID19. It advised the nation’s women to help with the country’s partial lockdown by not nagging their husbands. The ministry also advised women to refrain from being “sarcastic” if they asked for help with household chores. And it urged women working from home to dress up and wear makeup.

“(It) is extremely condescending both to women and men,” Nisha Sabanayagam, a manager at the advocacy group All Women’s Action Society, told Reuters. “These posters promote the concept of gender inequality and perpetuate the concept of patriarchy.”

“How did we go from preventing baby dumping, fighting domestic violence to some variant of the Obedient Wives Club?” wrote @yinshaoloong.

How did we go from preventing baby dumping, fighting domestic violence to some sad variant of the Obedient Wives Club? https://t.co/1SrVYp0e5d

“Avoid wearing home clothes. Dress up as usual, put on make-up and dress neatly. OMG! This is what Rina, our Minister of Women, Family & Community Development thinks is important during the #COVID19 lockdown?” tweeted @honeyean.

After this torrent of abuse, the ministry abruptly relented late Tuesday and abandoned its campaign. It said its suggestions were simply aimed at “maintaining positive relationships among family members during the period they are working from home.”

The ministry acknowledged that the advice could have offended some people and promised to “remain cautious in the future.”

Women’s groups around the world have warned that the lockdowns could result in a rise in domestic violence, and some governments are reaching out to women in need. The latest World Economic Forum Global Gender Gap index puts Malaysia at 104 out of 153 countries when it comes to women’s political empowerment and economic participation.

The ministry’s advice to women was not the only governmental misstep as it confronted the coronavirus. The country’s movement control order on March 18 specified that only the “head of the household” should leave the house to purchase necessities.

While the order did not indicate whether that person was male or female, men took it upon themselves to brave the grocery store.

It didn’t work out so well for many.

Facebook posts showed male heads of households having a tough go of it in the aisles, either staring in confusion at lists in their hands or taking instruction over their cellphones from central command back home.

Malaysian Cheanu Chew made fun of both himself and others in his Facebook post headlined “Attention All Men!” He advised: Shoppers “like me, don’t forget to fully charge your phone before you execute your mission. Also, get enough sleep the night before so you can stay calm over the phone to minimise disruptions during your operation.”

The supermarket chain Tesco Malaysia recognized there was a problem and swiftly came to the hapless male shopper’s aid with a how-to guide.

It proclaimed, “Now all husbands can shop.” And assured them, “Here at Tesco, we have your back!”

In the week or so since that announcement, men may be getting a little better at the supermarket. And with the swift climbdown on its original announcement, the women’s affairs ministry is apparently learning, too.