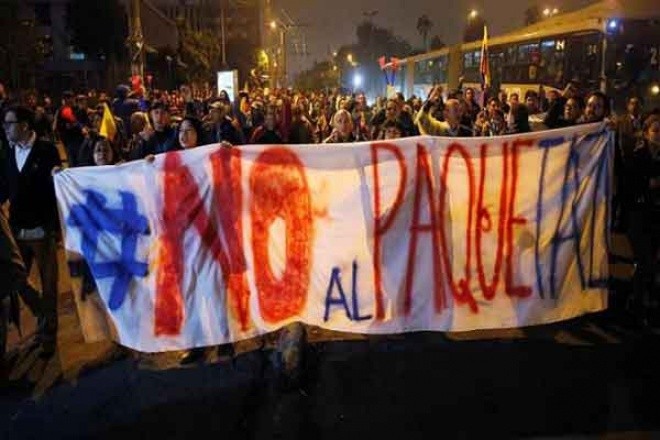 Assembly members of Citizen’s Revolution call for President Lenin Moreno’s ouster, early elections and a return to “rule of law.”

Former members of Ecuadorean President Lenin Moreno’s own party, Alianza PAIS, have announced they are demanding early presidential and congressional elections due to the executive’s “non-compliance of functions.”

Assembly member and leader of the left-leaning Citizens’ Revolution, Gabriela Rivadeneira, announced her party wants early elections in order to “move past the political crisis” that the country is going through.

Former president of the assembly during ex-president Rafael Correa’s last administration, Gabriela Rivadeneira “insisted” Thursday evening that the assembly call an “extraordinary session” to examine the administration’s “austerity measures” and to process the “removal of President Lenin Moreno.”

“We want to investigate the use of the state of exception and the removal of President Lenin Moreno,” announced Rivadeneira during an Oct. 3 press conference from the halls of the National Assembly in Quito. The administration announced a state of exception on Thursday.

A break away party from Alianza PAIS after it was converted into a neoliberal machine by Moreno once he entered office in 2017, Citizens’ Revolution (CR) was founded last year by Correa. The party seeks to maintain the original left-leaning ideology of Alianza PAIS, which Correa also founded and previously led for over a decade until he stepped down two years ago.

“We echo what the people want—early elections,” said the assembly leader.

“This is a constitutional right and the only way to get past the political crisis that the country is going through,” said the influential assembly member.

Rivadeneira said that she wants the assembly to return Ecuador’s “rule of law” that was taken away by Moreno’s state of exception that allows authorities to govern outside the constitution.

During the all-day strike and protests across the country, police and military have been accused of using excessive force against demonstrators. In a tweet posted by the nation’s People’s Defense, the state entity showed a national police member purposely running over a protester in Quito.

The Defense said it “condemns the excessive use of force as evidenced on social networks.” The public institution also said it was concerned that those detained during the Thursday demonstrations were not being held in locations “authorized by the law.”

President Moreno, during a brief press conference from the Simón Bolívar Air Base located in Guayaquil on Thursday night, thanked the police and military for “bringing back calm in the country.”

“After the state of exception was declared, violence was controlled almost entirely because of the effectiveness of (the police and military).

In Quito there were several instances of the National Police intimidating, hitting or overall preventing the members of the press from reporting on the protests and the police responses toward demonstrators.

“My presence here, like that of the ministers, the military and the National Police is to prevent those who ransacked the country from continuing to plunder Ecuador. … Won’t allow it,” asserted the head of state.

The president claimed that “dialogue” had been “exhausted” with the opposition. The leader went on to accuse protesters of trying being “golpistas,” or coup leaders, who want “to destabilize the democratically-elected government” but who will “pay the consequences.”

Ecuador woke Thursday to a planned, nationwide work stoppage announced by transport workers and taxi drivers to protest against the government’s “Paquetazo”, a slew of austerity measures that Moreno announced Tuesday in order to comply with the International Monetary Fund (IMF) in return for over five billion dollars in loans.

Top on the list of the measures is the elimination of fuel subsidies that will likely result in the increase of public transport by approximately 45 percent and the increase in everyday goods for average consumers already struggling to make ends meet in the dollarized nation.