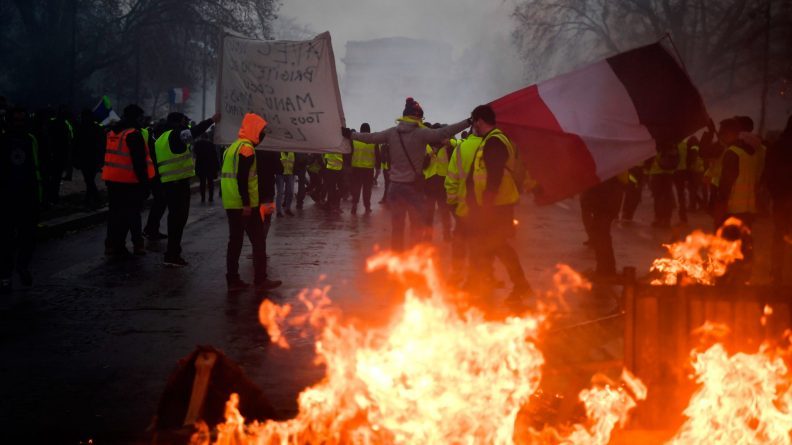 The so-called “yellow vests” take the streets for the eighth consecutive Saturday in the French capital and in various cities, so a new day of national mobilization is expected. planned in front of the Hotel Ville, headquarters of the mayor of Paris and has as final destination the building of the National Assembly according to a call made by social networks.

With the motto “On Saturday we march en masse. Let’s show that the movement is not over “, the yellow vests are scheduled to go through the Isle of Cité, Boulevard Saint-Michel and the Orsay museum, emblematic places of the city.

Likewise, a letter circulating on social networks will be read, rejecting the national debate launched by the president, Emmanuel Macron, and demanding the nomination of “a respectable personality to begin discussions on the recovery of the sovereignty of the people. “Quoted the Prensa Latina news portal.

The origin of the yellow vests movement that began on November 17 of last year, was the increase in fuel prices decreed by Macron and quickly included the increase in taxes in general and the loss of purchasing power as a result of government policy.

Now the yellow vests also demand to reform the Constitution for a full democracy and that citizens have the option of requesting or encouraging the holding of national referendums on relevant issues.

The French government questioned the demonstrators on Friday, describing them as agitators, according to the pronouncement of the official spokesman, Benjamin Griveaux, at the end of the Council of Ministers.

According to the spokesman, it is “Agitators who want the insurrection and overthrow the Government”, who are also “in a political struggle to question the legitimacy of the President of the Republic (Emmanuel Macron).”

Benjamin Griveaux, assured that the authorities will be forceful in the application of the norms against the demonstrators “nobody is above the laws in France” assured the Official Spokesman.