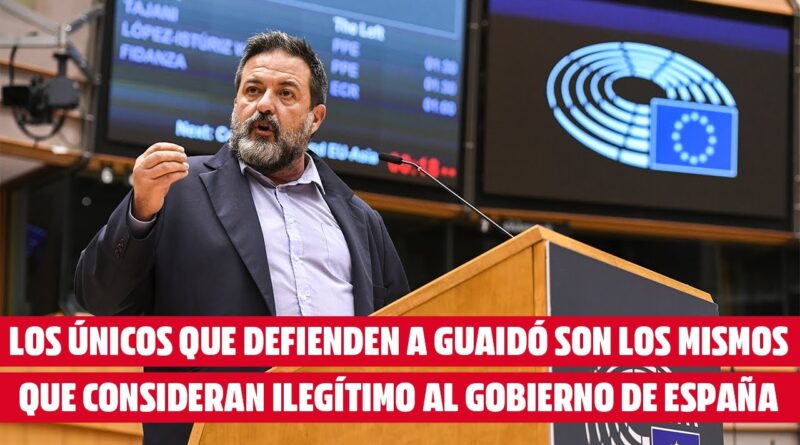 “I am surprised, for this never happens. Here we are raising the issue of Venezuela again; it is brought back into discussion by the Spanish right and the extreme right, trying once again for this parliament to make a fool of itself on this matter. Please try to understand that I’m surprised about the irony, if nothing else,” said the MEP, who in Spain represents the Unidas Podemos party.

In his speech, Pineda stressed that the intention to bring the issue back to the European body only seeks to revitalize the image of former deputy Juan Guaidó. “The sole objective of this resolution is to maintain, to give oxygen to the corrupt puppet, Guaidó, while disregarding the sovereign decisions of the Venezuelan people and their democratically elected institutions.”

Pineda thanked the Foreign Minister of the European Union, Josep Borrell, for having announced that this body would stop recognizing Guaidó, taking away the support that had been given to the self-proclaimed “interim president” of Venezuela during the previous years.

“Mr. Borrell, you know that those who have promoted this resolution are the same people who do not recognize the legitimacy of the Spanish Government. We thank you, we congratulate you for the little step you have taken, we hope we go further and recognize the legitimacy of the National Assembly of Venezuela and President Maduro. Thank you very much,” said Pineda while Borrell cut off the audio just before he finished speaking.

In his speech, the MEP also pointed out that “at the same time, they are taking advantage of ‘the Venezuela issue’ to try to wear down the Spanish Government which, incidentally, has allowed Leopoldo López to enter Spain in an irregular manner and settle in one of the the most expensive neighborhoods in Madrid.”

“A Leopoldo López who seems to be destined to be the new president of Narnia after we learned, not through Pravda or Granma but from the Washington Post, that Guaidó has become a millionaire by stealing the resources of the Bolivarian Republic of Venezuela abroad,” added the MEP.

Manuel Pineda agreed with the request of the Venezuelan government that the Spanish Parliament should investigate how Leopoldo López maintains his high standard of living in Spain. The Spanish right wing has received López with open arms despite the allegations of terrorism against him.