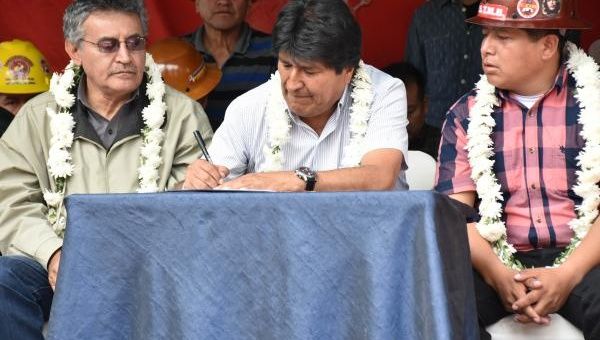 During Morales’ period in power, minimum wage workers have seen a 372% rise in wages over 13 years.

Leftist president of Bolivia, Evo Morales, has announced an above-inflation rise in the minimum wage. But also said that his own wage, and that of his ministers will be frozen.

Speaking on the subject, President Morales said; “The meeting with the COB [Labor union] ended happily. There will always be demands from the comrades, and we will always listen to them. We agreed two laws and two decrees for the workers, and we decided on a 3% rise in the national minimum wage.”

“We thank the comrades for their understanding. Wage rises will never be below inflation, though we also have to find a balance between workers and investment, because it is our duty to guard the economic growth that characterizes us” he continued.

The 3% rise means that wages will have grown at double the rate of inflation, which reached just 1.5% during 2018. Whilst Argentina suffered an annual inflation of 46% in 2018, Bolivia under Morales has been characterized by a stable currency and low inflation. In 2017 inflation was just 2.71%, and 2009 Bolivia reached a new record of 0.26%.

In 2005, during the neoliberal period, the minimum wage in Bolivia stood at just $54 per month. Now that figure is $308, which means that during Morales’ period in power, minimum wage workers have seen a 372% rise in wages over 13 years. Meanwhile, over the same 13 years, inflation is cumulatively 69%, meaning a large real-term wage rise for low-income workers. The new raise places the Andean country ahead of Brazil and Argentina in national minimum wage league tables.

The wider economy has grown 327% during the same period, making the country the fastest growing economy in the region, following their nationalization of natural resources and strategic industries.