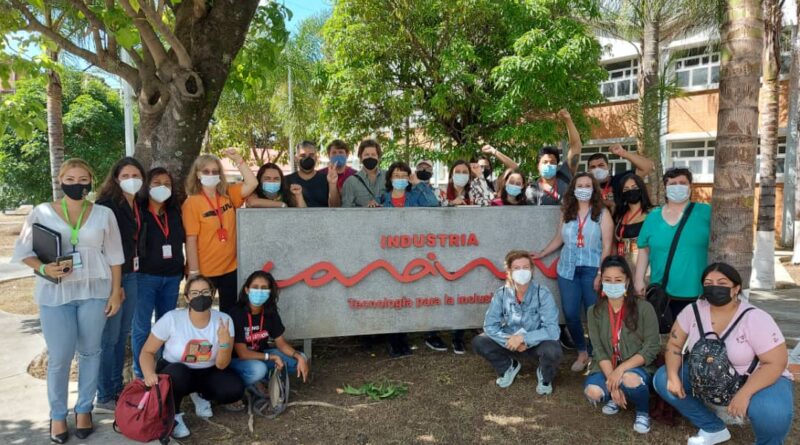 As a teacher who has had to struggle alongside thousands of coworkers, students and parents during the pandemic with hybrid education, I was astounded by my visit to the Canaima computer factory that was created to fulfil the late Venezuelan leader Hugo Chávez’s dream of “one computer per child.”

At the Bicentennial Congress of the People in Caracas hundreds of anti-imperialists worldwide convened to discuss the unity needed to defeat the brutal US sanctions Venezuela and many other countries are suffering under. The “sanctions,” or unilateral coercive measures imposed by the US against Venezuela, constitute a massive blockade meant to crush the Bolivarian Revolution.

After the congress, in partnership with the Simón Bolívar Institute, we toured the Canaima Factory in Caracas. When Chávez assumed power, there were many initiatives to put the people first. One of these, according to Gloria Caravalho, deputy minister for Technology and Information, was focused on education and ensuring children attended school regularly in Venezuela.

Chávez proposed a program to show students how to use computers from a very young age. This program began in 2008 with the goal of establishing full technological literacy. Initially, the government bought assembled computers through an agreement with Portugal. However, a program within the Ministry of Science and Technology was later created to build Venezuela’s own computers, developing the operating system and educational content entirely in Venezuela. They opened a production and assembly plant named after their open source operating system Canaima, and they began assembling their own computers in Venezuela in 2011.

Each production line assembled 1,000 computers a day. Employing enough technicians to meet the need for each child the factory ran 24 hours a day. Approximately 10 million computers were given out in a country with 30 million inhabitants. The program’s success and focus on lifting up the people was recognized by UNESCO as an example of how to bring technology to children and families.

On top of supplying children and university students with computers, the plan also included 1,200 InfoCentros—internet cafes where people could have free access and be taught how to use computers and the internet. Unfortunately, due to the US blockade they can only sustain 400 InfoCentros because repair parts are blocked from getting into the country. The sanctions have also affected their internet bandwidth.

From 2008, Venezuela began a process of digitizing all of the educational content in order for students to have constant access to school curriculum and books at their fingertips. The scope of the program also reached Indigenous students in the Amazon region. This project was funded by the country’s number one natural resource and income, petroleum. In Chávez’s words, Carvalho reiterated “it could not just be the computer, it also needed to be the content/ curriculum inside of the computer.”

Unfortunately, as part of stepped-up aggression against Venezuela, the US has forbidden suppliers to sell the parts the equipment needs. Carvalho stated, “Many of these parts and pieces were paid for by the Venezuelan government, but the parts were not received.” To mitigate this injustice as best they can, today the workers disassemble used equipment and reuse those parts. The economic war has also affected the hiring of laborers and technicians. Now they can only afford to run at a 10% capacity.

Chávez and the Venezuelan government were very intentional about the development of this program; they had a long term vision for what would expand the scope of education in the country. By making computers available to children and families for free, the population would be brought to the 21st century fully computer literate.

When we asked Gloria Carvalho, a PhD graduate, how much she had to pay for her education, she told us “nothing!” In fact, her masters and PhD education in Turin, Italy, and in Denmark were fully paid by the revolutionary government. University programs were developed in order to develop their own technicians and professionals to expand the technological scope of the educational program. The university program would have approximately 70,000 students a year in order to be able to operate these systems. Part of the studies also included free education abroad, to learn from partners such as China.

If it were not for the US blockade, even during the pandemic Venezuela would have been ahead in WiFi, computers and computer literacy for all families, including the most rural and Indigenous communities. However, the country’s communes—Venezuela’s system of neighborhood-run socialist governance—enabled parents, especially mothers, to be teachers in the home. Communes were able to manage and facilitate WiFi and computer access to children for their continued education during this hard time.

In the United States, under the increasingly profit-driven model of education, many urban poor school districts had to rely on corporations to donate Google Chromebooks and hotspots to each student after the pandemic hit. The digital divide in the United States was highlighted by the abrupt and unplanned start of virtual education.The defunding of public education has made the partnerships with corporations even greater.

Computer literacy was done by the teachers at all hours of the day to include late night conversations with essential workers trying to do what is best for their children. This work also included psychological work to ease parent’s tension about needing to work with technology without proper education. The amount of personal information and data collected, stored and sold by these corporations is yet to be seriously reckoned with. It is reasonable to assume that the “philanthropy” came with strings attached, namely that they would have ownership over the data accumulated on students, teachers, schools—and in some cases families—during the pandemic.

This problem was not experienced by the Venezuelan people. The education system values open source software and applications. The objective is for true equal opportunity for all children. There is not a profit motive operating Venezuela’s education.

Venezuela’s revolution has shown that anything is possible when the people come first. We must fight in the US to lift the blockade, end the unilateral coercive measures on Cuba and on any other country who has been punished for defying imperialism. Another world is possible, but we must fight for it.

Rachell Tucker was a member of the US delegation to the Bicentennial Congress of the Peoples of the World, held in Caracas on the occasion of 200 years of the Battle of Carabobo.

Featured image: The US delegation to the Bicentennial Congress of the Peoples of the World on their visit to the Canaima computer manufacturing factory, Caracas, Venezuela.