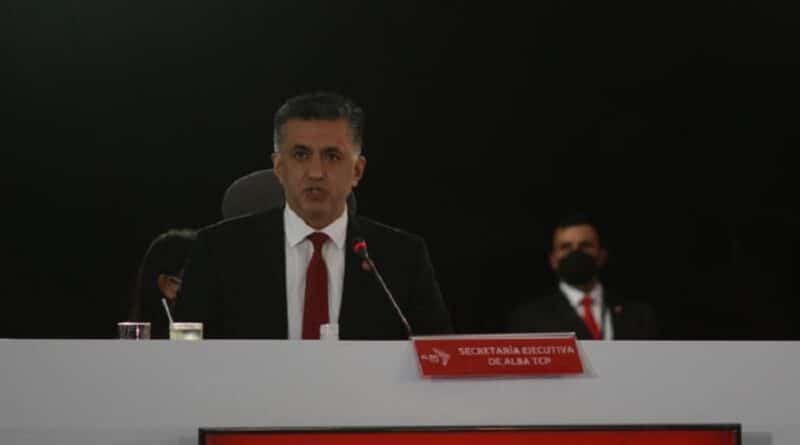 The Executive Secretary of the Bolivarian Alliance for the Peoples of Our America-Peoples’ Trade Treaty (ALBA-TCP), Sacha Llorenti, read the Final Declaration of the 19th Summit of Heads of State and Government, repudiating the aggressive and coercive measures exercised by the United States and Europe, advocating for a fair distribution of vaccines and medical supplies to combat COVID-19, and supporting and promoting respect for the sovereignty and the unity processes of the countries that make up ALBA-TCP, among other issues.

The document was put to a vote and was approved by the delegations present. Llorenti also reported on the approval of three issues on the agenda:

Below is the unofficial translation of the Final Declaration of the 19th ALBA-TCP Summit:

The Heads of State and Government and the heads of delegations of the member countries of the Bolivarian Alliance for the Peoples of Our America-Peoples’ Trade Treaty, meeting in person on June 24, 2021, within the framework of the commemoration of the bicentennial of the Battle of Carabobo in the Bolivarian Republic of Venezuela, by signing this declaration, renew our commitment to strengthening the integration and unity of our peoples as the founding ideology of Commanders Hugo Chávez and Fidel Castro Ruz; we vindicate the ideology of Bolívar, Martí, San Martín, Sucre, O’Higgins, Pétion, Morazán, Sandino, Túpac Katari, Bartolina Sisa and other heroes of Latin American and Caribbean independence, symbols of historical and cultural union of the struggle of our Indigenous peoples and the preservation of the most precious asset of freedom; we recognize the historical significance of the Battle of Carabobo, a milestone that seals the independence of Venezuela under the leadership of the Liberator Simón Bolívar, a struggle in which the combative character of the Venezuelan people was forged in defense of their right to self-determination, moral heritage and the values ​​of freedom, which have transcended Latin America, the Caribbean and the world.

• We ratify our commitment to genuinely Latin American and Caribbean integration [unity] that allows us to face together the claims of imperialist domination and the growing threats to peace and regional stability, with multilateralism and in accordance with the principles and purposes of the Charter of the United Nations and international law, in line with the proclamation of Latin America and the Caribbean as a zone of peace.

• We highlight the need to strengthen the Community of Latin American and Caribbean States (CELAC) as a genuine mechanism for political agreement that brings together the 33 states of Our America, based on the principle of unity in diversity.

• We welcome the return of constitutional order in the Plurinational State of Bolivia, which—thanks to the conscience and struggle of its people—was able to dismantle the criminal and corrupt coup and open a process of national reconciliation, based on justice, self-determination and democracy, We are also pleased with its return to the legitimate regional forums of political agreement and cooperation in pursuit of the well-being and development of our peoples.

• We highlight the excellent efforts and initiatives of President Luis Arce Catacora, both domestically and internationally, to move towards economic recovery, including financing and debt relief, as well as efficient management of the pandemic.

• We welcome the installation of the new National Assembly of the Bolivarian Republic of Venezuela, developed with absolute adherence to constitutionality and in peace. At the same time, we welcome the holding of the next regional and municipal elections, the twenty-sixth [electoral process] in the last twenty-one years of the Bolivarian Revolution, an expression of the solid participatory and protagonist democracy of the Venezuelan people.

• We ratify unconditional support for the Sandinista government, President Daniel Ortega Saavedra, and the Nicaraguan people in their decision to continue defending sovereignty, peace, and the notable social, economic, security and unity advances achieved.

• We condemn the attacks and repeated destabilizing attempts against the legitimate government of the sister Republic of Nicaragua by the United States of America, promoting unilateral coercive measures, among other destabilizing actions to try to interfere in its internal affairs.

• We welcome the preparation of the electoral process in the Republic of Nicaragua and we demand non-intervention in such matters, which are the exclusive competence of the Nicaraguan people and institutions.

• We celebrate and support the democratic forces in the election processes of governments in the ALBA-TCP region and the efforts made to achieve gender equality and the elimination of discrimination against Indigenous peoples.

• We welcome the relationship between ALBA-TCP and the UN System, CELAC, CARICOM (Caribbean Community), AEC (Association of Caribbean States), SICA (General Secretariat of the Central American Integration System), African Union, Arab League, CELA, ECLAC (Economic Commission for Latin America and the Caribbean), Eurasian Community and ECOWAS (Economic Community of West African States), under the principles of respect and non-interference in their internal affairs to guarantee greater equity and greater commitment in matters of social and economic policies.

• We ratify the right of the Caribbean countries to receive fair, special and differentiated treatment, we reaffirm the unconditional and necessary support for the defense and promotion of their just claims and reparations, we strongly reject the measures adopted against the brothers of CARICOM, considered non-cooperative jurisdictions.

• We express our deep regret for the fatal victims of the COVID-19 pandemic in the world and, in particular, in our region, while recognizing the commitment of the ALBA-TCP countries to mitigate its spread, as well as the extraordinary efforts by health personnel to face the health crisis, especially the work carried out in the front line by the Henry Reeve Brigade of the Republic of Cuba, as well as its development of five vaccine candidates, samples of development, sovereignty and solidarity.

• We reject the discrediting campaign—promoted by the United States government—against Cuban medical cooperation, which is offensive and particularly immoral in the current context of the global health crisis.

• We reaffirm the need for an urgent universal immunization against COVID-19, and for ensuring a prompt, equitable, supportive, non-discriminatory and affordable distribution of vaccines, supplies and equipment that allow everyone to be protected.

• We acknowledge the efforts of the Global Collaborative Alliance under the auspices of the World Health Organization. We welcome the launch of the ALBA-TCP vaccine bank, agreed to at the 17th Summit of Heads of State and Government of ALBA-TCP, as well as the drug bank, to help improve access to medical supplies, rapid tests and PCR tests in favor of all Alliance countries.

• We renew our most energetic condemnation of the genocidal economic, commercial and financial blockade imposed by the government of the United States of America against Cuba and the more than 240 unilateral coercive measures adopted by Trump, and kept in place by the, whose damage in the last five years has caused losses of $17 billion.

• We appreciate the historic support of all the member states of the Alliance for the resolution of the United Nations General Assembly on the need to end the economic, commercial and financial blockade imposed by the United States of America against Cuba, adopted yesterday 23 of June.

• We express our strong rejection of the absurd and unjustified inclusion of the Republic of Cuba in the list of state sponsors of terrorism by the imperialist United States Department of State, a unilateral action widely rejected inside and outside the United States, that has a negative impact on every sector of Cuban society and increases the country’s difficulty inserting itself in international trade, carrying out financial operations and acquiring basic supplies.

• We express our deep concern over the massive human rights violations against the Colombian people and demand respect for the dignity of the people, as well as their right to peaceful demonstration.

• We reject the reprehensible action of the Secretary General of the Organization of American States who, in exceeding his functions, has led that organization along an endless path of nonsense, the legitimization of violent actions, interventions in internal affairs, and breaches of the constitutional order in some countries of the region.

• We acknowledge the commendable work of the Alliance during the events that took place in Saint Vincent and the Grenadines following the eruption of the La Soufrière volcano, as a symbol of support and solidarity of the ALBA-TCP countries with the people and the Vincentian government.

• We reaffirm our full support to the Caribbean countries in their claim for compensation for the genocide of the Native population and the horrors of slavery and the transatlantic trade, and we also express our commitment to the defense and promotion of Latin American and Caribbean culture and the identity of the peoples of the region with particular respect for, and promotion of, autochthonous and Indigenous cultures.

• We support promoting the development of the complementary economic zone ALBA-Petro Caribe as a true model of productive and technological development based on the values ​​of the Alliance and the principles of the Peoples’ Trade Agreement.