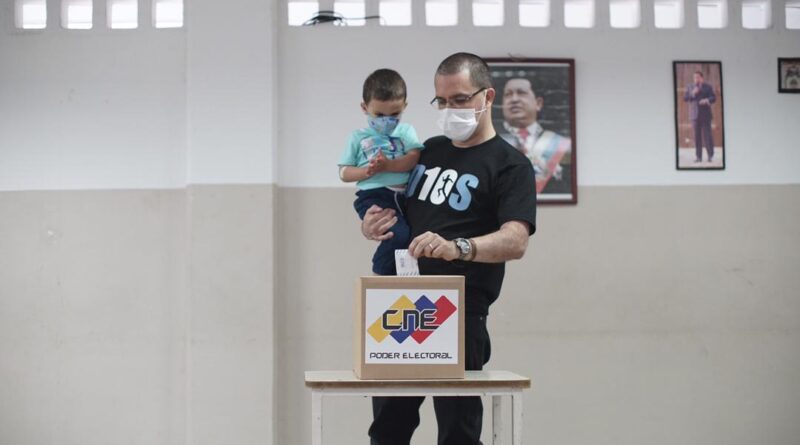 “The Bolivarian Republic of Venezuela once again calls on the government of the United States to acknowledge the failure of its destabilizing strategy against the nation aimed at promoting regime change,” posted Jorge Arreaza, the Venezuelan Minister of Foreign Affairs. On Sunday, Arreaza told the US Secretary of State Mike Pompeo that he has definitively failed in his interventionist strategy in Venezuela, and suggested Pompeo recognize it “calmly and with resignation.”

The Venezuelan top diplomat wrote: “A zombie spoke! Although according to his boss (Donald Trump) the fraud was committed in the US elections.” This was in response to Pompeo’s tweet alleging that an “electoral fraud” is being carried out in Venezuela.

After exercising his right to vote on December 6, Arreaza stated, “The only opinion and recognition that interests us is that of the humble Venezuelan woman, and that of the Venezuelan man, who came to vote today, and even those who have not come to vote.”

More than 300 international observers from 34 countries arrived in Venezuela despite the pandemic in order to be part of history, explained the Venezuelan Foreign Minister, stressing that some came even from Asian countries like Nepal, but some could not arrive from other parts of the world due to the logistics of flights because of the pandemic.

“However, they have sent us their greetings, regretting their inability to attend, to observe (the elections) in Venezuela,” informed the minister. “I wish the European Union had come. Also the UNASUR that it currently being reconstituted,” he added.

New stage in the Parliament

The Foreign Minister of Venezuela stressed the importance of participating in this electoral process. He said that just like since the beginning of the Revolution it has been possible to advance in profound changes at both social and political levels, overcoming obstacles; hope is born again in this new stage to renew the parliament.

Overseers from all continents in Venezuela

The Venezuelan diplomat, in his statements from the Manuel Palacio Fajardo High School located in the Caracas parish 23 de Enero where he cast his vote, said that the efforts have been great; more than 300 international observers arrived in the South American nation to participate in the electoral event.

In this sense, he ratified that Venezuela has complied with a democratic, constitutional right and with the people who are the protagonists of this electoral event.