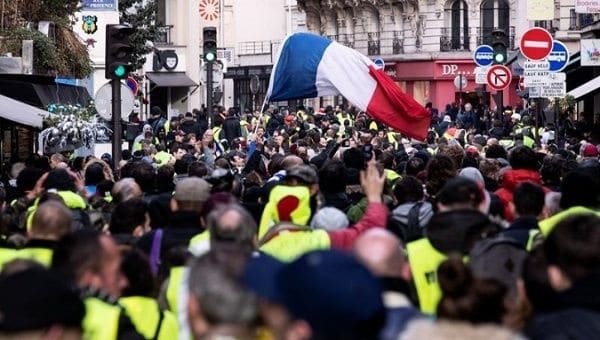 The yellow vest movement, which that has put French President Emmanuel Macron’s leadership under scrutiny, launches its sixth day of demonstrations Saturday with dwindling numbers.

For the sixth nationwide protest, yellow vests will implement new strategies, according to posts on social networks. One of the initiatives includes using trucks to block France’s borders.

“Many people from the regions came to Paris [on previous occasions]. In this opportunity, wepropose to get together at the borders,” Priscillia Ludosky, a protester, told Le Parisien newspaper.

The movement’s objective is to hinder international traffic by blocking merchandise trucks from entering France. One of the tolls which will host a demonstration is in Le Boulou, which is a commune situated 17 miles from the Spanish border, according to Infobae. Initially, yellow vest protesters had planned to march to the former royal city of Versailles, a symbol of French state power and one of Europe’s top tourist attractions. However, at 9 a.m. they changed locations, choosing the Sacre-Coeur basilica in the Parisian neighborhood of Montmartre.

Versailles was a focal point of the French Revolution and the October 1789 march on the palace by the Parisian mob, which led to overthrow and subsequent execution of King Louis XVI.

In Pfastatt, eastern France, 14 demonstrators were arrested by police for trying to block access to a factory supplying parts to carmaker PSA Peugeot Citroen.

The Yellow Vests is a protest movement that first appeared in France in October before extending to other countries such as Belgium, the Netherlands, Spain, Germany, Sweden, the United Kingdom, Ireland, Canada, Greece, and Italy.

However, their numbers in France have declined. According to Reuters reports by 11 a.m. Saturday only 800 demonstrators had gathered in Paris. This compares to about 4,000 demonstrators at the same time last Saturday.

This mobilization, which originated from social network messages calling for protest, was initially focused on the rejection of fuel taxes. However, the social mobilization quickly expanded to other demands such as the increase in purchasing power of the middle classes and lower classes and the resignation of President Macron.

According to French officials, 10 people have died since mid-November, mostly in car accidents. Throughout France 200 roundabouts remain occupied by yellow vest protesters.