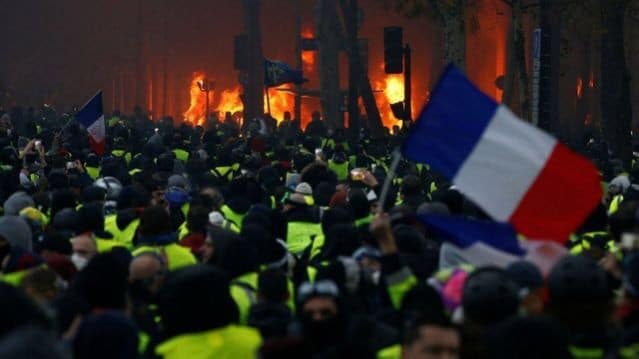 France is a country that’s no stranger to protest movements—from the massive student demonstrations of 1968 to contemporary union-led strikes. But during the “yellow vest” protests that rocked the streets of Paris this weekend, protesters reached further back in their history, to the era of the French Revolution.

Protesters marching along the Champs-Elysées on Saturday (Dec. 1) could be heard chanting slogans like “We are running the revolution” and “Macron to the Bastille.” The Arc de Triomphe bore a message in spray paint: “We have chopped off heads for less than this,” a reference to the death by guillotine of king Louis XVI and his wife, Marie-Antoinette.

Are the yellow vests modern Jacobins fighting contemporary tyranny—or are they something entirely different? Quartz spoke with Danielle Tartakowsky, a history professor at Paris 8 university who recently published a book about the French state, about how to contextualize the yellow vests within France’s history of protest movements. According to Tartakowsky, the current demonstrations are unlike any other, marking an important shift in France’s political landscape.

Unlike in previous large-scale protest movements in France, the yellow vests began as an organic, grassroots movement, born of the frustration of a small group of individuals who organized the protests entirely on Facebook (link in French). Tartakowsky says that’s one way in which these protests are unique. Typically, French protests on the left have been organized or supported by major labor unions, and protests on the right (such as the marches against the legalization of gay marriage in 2012) were typically organized by Catholic groups.

The lack of institutional framework is one of the things that sets the yellow vests apart from previous political movements and give them independence from any particular party, politician, or political leaning. That is one of their strengths, says Tartakowsky, since it gives the movement broader appeal (link in French). But it is also a major weakness, since the movement suffers from a lack of coherent message and leadership. Even its elected representatives disagree with one another (link in French) about the future of the movement.

And while the yellow vest movement began as a protest against the French government’s planned increase in fuel taxes, its demands have since grown to encompass all sorts of grievances against the government of president Emmanuel Macron, from gender inequality to the funding of public services and immigration policies. These factors have made it difficult for the government to engage in dialogue with the yellow vests.

France’s previous blue-collar movements were traditionally affiliated with left-wing parties and workers’ unions, while its socially conservative movements have been linked to the right and religious groups. But the yellow vests are an amorphous group of people from all different political leanings in France, including socialists, communists, conservatives, far-right extremists, anarchists, and even centrists who identify as former Macron supporters.

As Tartakowsky pointed out (link in French) in the French magazine Les Inrockuptibles, the movement has defined itself in opposition of Macron, a man who self-identifies as “neither right nor left,” and so it is neither on the right or left itself. “We can see that our categories are disrupted,” she told the magazine. Instead, the yellow vests have coalesced around what can broadly be described as a working- and middle-class agenda—and a complaint that they have seen their quality of life and purchasing power dwindle in recent years.

Writing in The New York Times, Alissa Rubin writes(paywall) that the protestors are “men and women who rely on their cars to get to work and take care of their families,” including “small-business owners, independent contractors, farmers, home aides, nurses and truck drivers” who “live and work primarily in rural towns and in the suburbs or exurbs of France’s big cities, many earning just enough to get by.”

Tartakowsky says we can’t understand the yellow vests without looking at the disintegration of France’s traditional left-right divide. Macron himself represents a type of political insurrection; when he created his own party La République En Marche, and beat every established party in France to win the presidency in May 2017, he caused a reorganization of French political structures. This geopolitical trend didn’t start with Macron; the traditional, two-party system is under siege in many countries (paywall). But he has embodied this process more than any other single politician in France.

Tartakowsky argues that the leaderless, grassroots yellow vests are a logical continuation of this reorganization of political and institutional life. “The terms of our social and republican compromise was generated throughout fifty years of our history,” she told daily newspaper Le Figaro (link in French). “But there is not much left of it now. A new social compromise remains to be born. In my opinion, the yellow vests are a serious symptom … of a problem whose outcome nobody seems to be able to control.” And the problem is a daunting one: How can governments help the people left behind by a rapidly-changing, globalized economic system?

That’s why she explains that, even if the yellow vests disband, economic inequality, the urban-rural divide, and the anti-globalization backlash that led to the protests will not go away. As she told Quartz,“I think this is a moment that will be crucial … for the future of the country.”