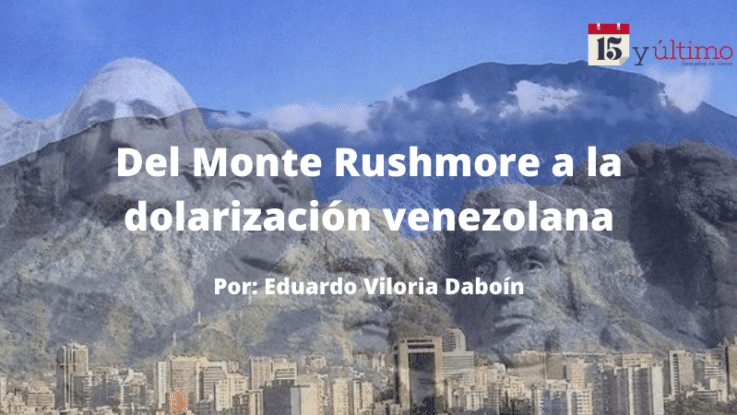 On a mountain in the USA located in Keystone, South Dakota, a huge sculpture representing the faces of four American ex-presidents was built between 1927 and 1941: George Washington, Thomas Jefferson, Abraham Lincoln and Theodor Rooselvet.

Mount Rushmore, as the mountain on which this sculpture was erected is known, is part of the Black Mountains in the Rocky Mountains, which for the Sioux tradition is a sacred site where, before the founding US presidents were carved there, they celebrated their ritual ceremonies for the spirits of the dead warriors and went to pray to the “Great Spirit”. The North American aborigines that today live reduced in reserves remember the site, in addition, because in 1890 the American army slaughtered not very far from there more than two hundred Indians.

The monument, sculpted in the rock of the mountain itself, known as Mount Rushmore National Memorial, is a perfect symbol of the spirit that sustains the United States: it commemorates the American nation and eternalizes both the reproach and humiliation of the peoples it razed to consolidate its power
II

In 1845, in the New York Democratic Review magazine, journalist John L. O’Sullivan coined the term Manifest Destiny to ideologically justify the territorial expansion of the United States beyond the territory of the 13 colonies that originally became independent from Britain. O’Sullivan said: “the fulfillment of our manifest destiny is to extend throughout the continent that has been assigned to us by providence for the development of the great experiment of freedom and self-government. It is a right like the one that has a tree to obtain the air and the land necessary for the full development of its capacities and the growth that it has as destiny”. Twenty years before, in 1823, the “Monroe Doctrine” had been coined, according to which all America must be for the US citizens. Both theoretical elaborations support two central aspects in the conformation of the American nation: expansionism and hegemonistic domination.

The historical figures celebrated on Mount Rushmore in one way or another, practiced the postulates of these doctrines: all made their contribution, while they were presidents, so that the US territory ceased to be the original of the 13 colonies that became independent from Britain and become a huge extension that joins the Atlantic with the Pacific, for which it was necessary to reduce the aborigines to tiny reserves, conquer the west via genocide, snatch from Mexico the enormous amounts of territory called today Texas, California, Colorado, Arizona, New Mexico, and waging war on Spain to have Puerto Rico and Cuba, all this in the 19th century.

Today the faces of three of those four characters circulate in the millions across the planet printed on dollar bills: Washington on the $ 1, Jefferson on the $ 2 and Lincoln on the $ 5, along with others like Benjamin Franklin , which is on the $ 100 bill.
III

“Dad, who are the men who appear on dollar bills?” Asked the boy when he left a Caracas grocery store with his father after having seen him pay with a $ 5 bill. “I don’t know who they all are, but I know they are heroes and founders of the United States,” the father replied hesitantly.

“I don’t understand very well why we have to use those bills to buy things while being here in Venezuela,” he continued, “I liked it better when we used bolivars because important characters in Venezuelan history appear on those bills.”

“And you know who are the ones that appear on our bills?” The father said finally, not knowing very well what else to say. To which the boy responded with total security: “Of course, dad, the teacher taught us at school: Simón Bolívar, Francisco de Miranda, Luisa Cáceres, Simón Rodríguez, Ezequiel Zamora, Josefa Camejo, Antonio José de Sucre, Rafael Urdaneta, José Félix Ribas”.

Perhaps without knowing it, this child expressed in the dialogue with his father a central symbolic issue: the historical characters printed on the Venezuelan paper money that we have gradually stopped using are an expression of the doctrine of Latin American unity and integration, of anti-imperialism and anti-colonialism, of the struggle for freedom and independence, historical basis of the struggle of our peoples against the colonialist hegemonism of Spain, first, and of the United States, later.

Together with the political and economic battle that has led to the de facto and inertial dollarization of Venezuela, a symbolic, cultural and battle for meaning is fought, a battle for perception and sensitivity, a battle in which we lose territory when, through of something as everyday and widespread as paper money, symbols, icons, determining standards in the construction of our nationality, are replaced in our imaginary by others such as the faces of the founding presidents of the US practicing Monroe Doctrine and devotees of Manifest Destiny.

Trump, Pompeo, Pence and Abrams deploy their multidimensional war strategy to end the Bolivarian revolution, while their followers in the Venezuelan right, with Guaidó at the head, crumble and sink into their own ineptitude and misery, and the Venezuelan state appeals to all its forces not to succumb to aggression. The Venezuelan people resist with dignity and / or survive as they can, hundreds of thousands of peasants strive heroically to continue producing food even with their fingernails, thousands and thousands of comuneros and comuneras sustain with their work the profound transformative horizon of a society really democratic. Anyway, which is not a small thing given the magnitude of the conflict in which we are immersed, we all celebrate that the plans to unleash a war in Venezuela did not work and we ended this 2019 in peace and not with the political violence conjured.

Meanwhile, while all this happens, an equivalent of Mount Rushmore is slowly sculpted in our pockets and is modeled with invisible chisels in our imaginary as people.

This string of brands, names, prices in dollars, can be read just by looking through one of the shelves of Cine Citta, De Casta, Life and Food, Market Place, Gourmet 54, Bakery and Market, in Santa Monica, Bello Monte , Chacao, Chacaito, El Cafetal, Las Mercedes.

There are more than one hundred establishments called “Bodegones” that have proliferated in Caracas in the last year. Everything is imported there and everything is in English. On the shelves the prices are displayed in dollars. The premises are new, newly decorated, with aesthetics that suggest chains such as Oxxo or Seven Eleven, which plagued the cities of Mexico with the United States after NAFTA and the similarity is not only aesthetics but the type of products and brands they sell, although there is no FTA between the US and Venezuela but rather a commercial and financial blockade of that country against Venezuela.

These days of December, in all these Bodegones they have a diversity of Christmas baskets displayed for ordering, with assortments of baubles or pastries and beers or body hygiene items. Prices range from $ 30 the smallest and simplest to $ 120 or $ 150. Everyone can assemble their baskets with the products they want. The more baskets a person orders, the better price they are going to get and you can even take a gift “on the house”.

Is this inertial dollarization that has been occurring in Venezuela an exclusive result of the dynamics of the free market, or is it part of a government strategy to influence the national economic situation? How to prevent it from becoming irreversible and uncontrollable? Is there an economic plan to order this dynamic and maneuver it towards the achievement of the transforming objectives of the Bolivarian revolution? Can the Venezuelan State make dollarization pay off in favor of the country and the political project of the Bolivarian Revolution, without this phenomenon negatively impacting the social conquests of our people, so that it does not accentuate the inequalities and other social consequences of the crisis and the blockade? Can it be used to strengthen transparency and confidence in the Venezuelan economy?

Answering these questions is central to the possibility of maintaining a transformative strategic orientation and to move forward in the very complex context of crisis, strangulation and blockade that we are going through. The answers will be a good part of the keys to what will be 2020 and the years to come.