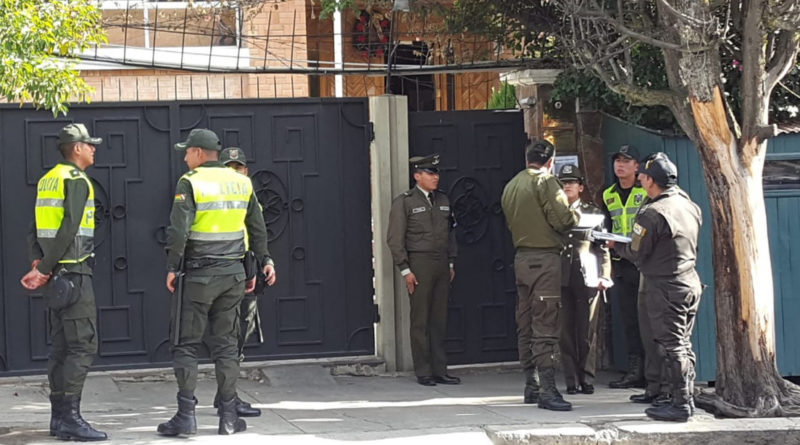 “It is an outrage that we will never allow any country,” said Foreign Minister Marcelo Ebrard at a press conference.

Marcelo Ebrard, head of the Ministry of Foreign Affairs, reported that Mexico will file a lawsuit against the de facto government in Bolivia before the International Court of Justice for the siege against his country’s embassy in La Paz and the ambassador’s residence.

“We will file an appeal with the International Court of Justice so that the police and military siege at the headquarters of the Mexican Embassy in Bolivia will be suspended. We demand respect for the Vienna Convention and the Bogotá Pact on the matter,” said Ebrard.

In this regard, at the morning press conference on Thursday, the Mexican Foreign Minister said that there is no precedent for harassment of a Mexican diplomatic headquarters such as the one currently taking place in Bolivia, which includes drones flying and taking pictures, as well as more than 90 members of the police and the army in the immediate vicinity.

“We are establishing a connection with the international community because even in the worst years of the military dictatorships of the 1970s and 1980s, Mexico’s diplomatic facilities were never put at risk,” said Ebrard.

The SRE explained that Mexico filed the lawsuit after Bolivia systematically violated the Vienna Convention, which establishes international mechanisms to grant asylum to persecuted politicians.

“It is one of the few cases in which we have done something like that, so it will be a very relevant case,” he added.

Emergency measures and international support
Ebrard also said that at the moment Mexico does not plan to close its Embassy in Bolivia, since there are about 10,000 Mexicans in that country and the closure would put the population settled on Bolivian soil at risk.

“We would do it as a last resort, hopefully we won’t get there,” said Ebrard. “It is an outrage and we will never allow that to any country,” he added.

The Mexican Foreign Ministry announced that nine Bolivians who applied for asylum are currently at its diplomatic headquarters in La Paz. Of these, four have an arrest warrant issued by the de facto government of Bolivia days after the asylum request.

In addition, Ebrard reported that at least 29 countries have contacted the Mexican Embassy in Bolivia or the Mexican Foreign Ministry to express their concern over harassment of their diplomatic mission.

Among the countries that have expressed concern are nations of the European Union and “almost all” the countries of Latin America.

It was also reported that an emergency plan is already under way , but the Mexican Foreign Ministry reserved the information given the behavior of the Bolivian de facto government.

Finally, Ebrard ruled out that at the moment Mexico is going to withdraw its diplomatic personnel in Bolivia or expel Bolivian diplomats in Mexican territory.

The government of Andrés Manuel López Obrador does not recognize Jeanine Áñez as president of Bolivia. In fact, Mexico offered political asylum to Evo Morales after the coup against him. Currently, the deposed president lives as a refugee in Argentina, where he paves the way for the next candidate of the Movement for Socialism (MAS) in the face of the presidential elections of 2020.

“That cannot be further from the truth. Bolivia is a country that respects the Vienna Convention on diplomatic relations. In that sense, it will never violate the immunity of a diplomatic compound or the investiture of a diplomat regardless of the country of which be concerned,” says a statement from the Ministry of Foreign Affairs.

In addition, in the text, the government of Jeanine Áñez expresses “her deep concern about the interference of Mexico in the internal affairs of Bolivia” and calls for a “constructive dialogue” with that country.