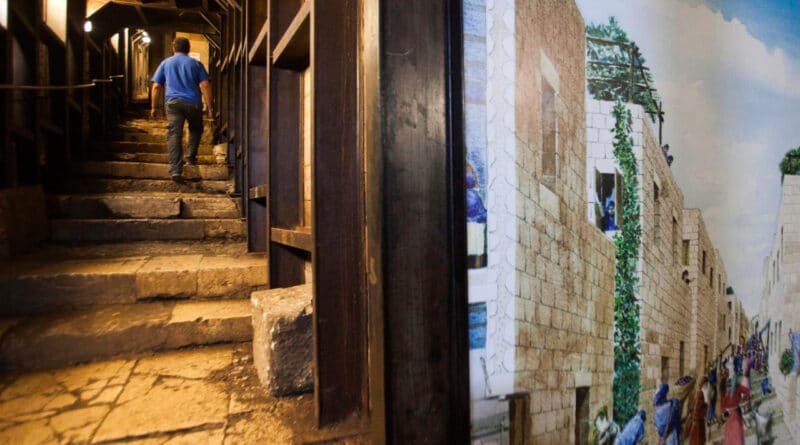 The history of Palestine, a glorious tradition of culture and religion, politics, commerce, and unmatched art and architecture, has all but been lost so that Zionists can claim that they are the true successors of Joshua and King David.

One of the many gems that exist in the city of London is a unique bookstore by the name of Jarndyce Booksellers. Jarndyce specializes in first editions, rare books, and wonderful collectors’ editions of the complete works of Shakespeare, Dickens, and countless others. Also displayed in the store are enormous antique illustrated copies of the Bible. These mammoth books are beautifully adorned with illustrations that bring Biblical characters and stories to life.

I remember sitting as a child, leafing through an old, illustrated copy of a Bible that was part of my father’s book collection. It too had wonderful illustrations, and I would sit there and look at the pictures of the great men and women, and experience the great moments that are described in the Bible. The angel who stopped Abraham as he was about to sacrifice his son; Moses coming down from Mount Sinai; the young David slaying the giant Goliath, and so many more. They all came alive in front of my very eyes and it was as clear to me as a child as it is today and to so many others, that those stories describe real historic events.

These lovely renditions were intended to create the impression that the Bible tells stories that are historically true. They lead readers and even those who do not read but hear the stories and look at the illustrations, to believe that these were real people and real events that took place.

It is easy enough to point to an ancient city in Palestine, say Bethlehem or Jerusalem or some corner of the desert near Bi’r Saba, and claim that a particular Biblical event took place there. This literal reading of the Bible, and particularly of the Old Testament, has given and continues to give Zionism enormous impetus.

RELATED CONTENT: Yes, There is a World Zionist Congress – and it is Meeting Now

Zionists rely on millions of people across the world who have been misled to believe that there is historical truth to the Bible, who think that today’s Israel is the true and rightful successor of Biblical Israel and who allow Zionists to claim the Bible as their actual history book.

The Greeks and the Nordic people replaced their ancient indigenous mythologies with Christianity, retaining their mythology as a part of their cultural history. In India, ancient mythology is very much alive and ancient gods are still worshiped in temples throughout the country, yet that is never confused with India’s actual history. Vishnu is never confused with Ashoka or Buddha with Akbar. Each has its respective place within the rich Indian culture.

Neither the people of Greece, the Nordic people, or even those who practice various faiths in India regard their mythology as history. You will not find Greek archeologists digging to find the home of Zeus. There are no signs that the Nordic people are searching for the ancient city where Odin and Thor resided, and even in India, where the ancient gods are very much part of life, there is no expectation that the city of Shiva will be dug up by archeologists.

This is because the separation between myth and religion and history is clear, except in the case of Zionism. Zionists, both Christian and Jewish, firmly hold to their demand that the Bible is history. Archeologists working in the name of Zionists have been digging up Palestine for two centuries, often ignoring or even destroying valuable artifacts that do not serve their purpose.

This is because Zionist archeologists are motivated not by scientific curiosity, but by a political agenda. They ignore the wealth of history and archeology that exist in Palestine and search for proof of their own theories.

The need to validate Zionist claims that connect current day Israel with the ancient Hebrews and the glorified mythology as it is presented in parts of the Old Testament often comes at the expense of important historical sites and monuments. In fact, is not uncommon to see invaluable historical sites destroyed by design at the hands of Zionist institutions.

The Mamilla Cemetery is one such example. It is an ancient Muslim burial ground and holy site in the center of Jerusalem believed to date back to the seventh century. Numerous saints of the Sufi faith and thousands of officials, scholars, notables, and Jerusalem families have been buried in the cemetery over the past 1,000 years.

Companions of the Prophet Muhammad were said to be buried there, but since the Zionist conquest of West Jerusalem, the cemetery has fallen into disrepair, with ancient tombstones destroyed and desecrated. Over the last decade, a significant portion of the cemetery has been razed and human remains have been desecrated so that the Simon Wiesenthal Center can build a facility, shamelessly called the Museum of Tolerance.

Since 2010, the Center for Constitutional Rights and the Campaign to Preserve Mamilla Cemetery have worked to halt the construction of the new facility and preserve what remains of the ancient site. To this end, petitions have been filed with various UN bodies, including UNESCO, to protect the sacred site.

RELATED CONTENT: The Palestinian People Were Robbed of Their Homeland and Their Ancient History was Stolen

The “Museum of Tolerance,” as it is called, has resulted in the disinterment of hundreds of graves, and the whereabouts of the countless human remains that have been disposed of are unknown. Recognized as one of the most prominent Muslim cemeteries in the world, where seventy thousand warriors of Saladin’s armies are interred, is now all but gone.

Bab al-Rahmeh is yet another famous Islamic cemetery in Jerusalem. It extends from Lions Gate to the end of the wall of Al-Aqsa Mosque near the Umayyad palaces in the south. The Israeli government is in the process of confiscating parts of the cemetery to implement a settlement project. Plans include creating, “paths of biblical gardens,” once again erasing historical sites in order to build monuments to commemorate a history that never was.

Another classic example of the destruction of real history for the sake of mythology is the opening of the so-called “Temple’s Baptism station” on the historic land of the Umayyad palaces in the Old City of Jerusalem. The Temple in question is the Jewish Temple and the Umayyad palaces on which it is to be built date back nearly 1,400 years, built in the early stage of the Islamic period, and used to house the Islamic Caliphs and institutions that managed the affairs of Jerusalem and the Al-Aqsa Mosque.

Zionist authorities have not only destroyed precious historical sites in search of mythical ones, they have also allowed invaluable historical sites to fall into disrepair. There are countless such sites throughout Palestine, such as the mosque of Dhaher Al-Umar in Tabariya, which now stands alone, in ruins, a solitary witness to the glorious Arab past of the city.

Daher al-Umar was a Palestinian leader who ruled most of Palestine and shaped its history throughout the entire 18th century. Not only has his memory been erased, but the monuments that carry his name and still exist now lay in ruins.

The mythology of the Old Testament was turned into history through a successful attempt to make the stories and the figures in these stories, mythical as they may have been, into actual historical events and figures. At the same time, the real history of Palestine, a glorious history of culture and religion, politics, commerce, and unmatched art and architecture, has all but been lost so that Zionists can claim that they are the true successors of Joshua and King David.

There is no harm in enjoying the wonderful illustrations that adorn the Bible, the likes of which one finds at Jarndyce Bookseller. In fact, I intend to continue to visit that store whenever I can and enjoy those wonderful renditions of Old and the New Testament stories. However, we must be careful not to confuse those stories and the illustrations with the actual history of Palestine.

Author’s note Readers in search of an accurate history of Palestine can check out Nur Maslaha’s book, “Palestine, A Four Thousand Year History.”

Miko Peled is an author and human rights activist born in Jerusalem. He is the author of “The General’s Son. Journey of an Israeli in Palestine,” and “Injustice, the Story of the Holy Land Foundation Five.”