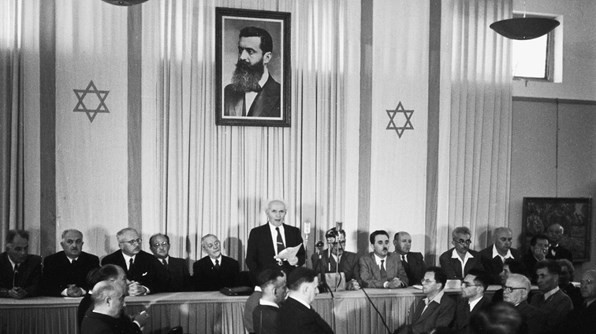 This outrage is normal, because it comes from a colonialism that does not come from an ethnic people, which has no history and snatches history from the native people, but it is also normal for the Palestinian people may disappear.

We are in the 21st century and we think and even feel that colonialism is a savagery that has already been overcome in the history of humanity. No, and an example of this is the colonial anachronism called Israel, which was imposed from Europe and by Europeans officially on May 14, 1948 in historic Palestine.

This (Israel) is a classic colonialism, still embedded in our historical contemporary being. I am not talking about its character as a regime of Apartheid, racist and genocidal, that it is and it is natural that it is, since its essence is colonial.

The Zionist ideologues knew the colonial cycles, in great lines, a people with its homeland, with a starting point to colonize another people, to plunder. The native people subsequently reach their independence and the colonizer leaves. The colonizing people have a point of return, which is their homeland. The Zionist ideologues were asking the question: The day these Palestinian natives gain their independence, what is our point of return? There is no point of return, or in reality everyone would return to their respective homeland: Russia, France, Poland, Ukraine, Germany, England, Morocco, and so on. And for this not to happen, extermination is necessary, the end of the Palestinian people. That extermination is not necessarily through gas chambers, but is exercised in different ways such as Apartheid, racism, checkpoints, bombings, the construction of the wall, destruction of crops, water blockage, violation of UN Resolution 194 to the Right of Return of Palestinian Refugees, Oslo Accords, media propaganda, and so on.

Genocide has existed throughout classical colonialism, but in broad lines it was not the ultimate goal, but in the face of native rebellions, moreover, extermination was not a gain for the colonizer since the native was cheap labor, the slave was the engine of production, the engine of the economy.

The colonialism of the Eurosionist movement against the Palestinian people not only expels it from their homeland, but also expels it from history, and although it is not the only people they expel from history, we are facing the only case where the colonizer appropriates the history of the native people.

In classical colonialism the colonizing people destroy the history and culture of the native people, the beast, the impure, the savage. Zionist colonialism has destroyed contemporary Palestinian heritage, in order to erase any vestige of such a thing called Palestine, and see, what it was or what the Zionists called: A land without people for a people without land. Destruction of documents, books, archives, works of art, relics, etc.

In classic colonialism the colonizing people do not expel the native but subdue him, the Palestinian people are also made subject but the particularity is their expulsion, Al Nakba 1948, Al Naksa 1967, the violation of Resolution 194 (Right of Return), the Apartheid, racist legislation, genocides, among others.

Colonialism of the European Zionist movement implants its own population as a national identity, stealing a millenary passage from the history of the native people. Falsifying history for the justification of colonization: Israel the Earth that God promised to the Jews. The people who return to the ancestral land after 2000 years. Jewish religious identity is taken as a pretext of national identity. We also see in this case how a European white religious community of Indo-European roots claims historical rights in a Semitic nucleus.

The Israeli is not an Israelite. The Hebrew people come from Iraq and on their journey to Palestine, other tribes, all semites, were incorporated into that caravan as usual.

On the other hand, the West does not keep the notion that Jewish-Christian-Muslim monotheism is an inheritance of Arab history, and the Jewish-Christian archive is an omnipresent record in Western sentiment that has allowed the successful fraud of Zionism to use a fascinating religious narrative for the theft of native Palestinian people’s history.

… Europe does not have its own monotheism or rather, its monotheism is Arabic …

The Palestinian people have 18 thousand years of history, 11 thousand years of written history, starting from Jericho. There is now a dispute between religious Zionists and secular Zionists. Some religious Zionists state that it is not the whole history of that people that belongs to them and that it is from Jewish monotheism, many are even anti-Canaanites. Secular Zionists who are the most operative, skilled and pragmatic, manifest that the entire ancient history belongs to the Jewish people, which is their ancestral past.

Given this colonial anachronism in our 21st century, where they steal the history of the aboriginal people, but also steal the most popular artisanal expression of the Palestinian people such as embroidery, Tratriz, and other cultural manifestations such as the culinary expression of the Arab world of the Levant, falafel, hummus . . .

This outrage is normal, because it comes from a colonialism that is not from an ethnic people, which has no history and snatches history from the native people, but it is also normalizes the disappearance of the Palestinian people.

Featured image: May 14, 1948. Declaration of the Creation of the State of Israel in Palestine.