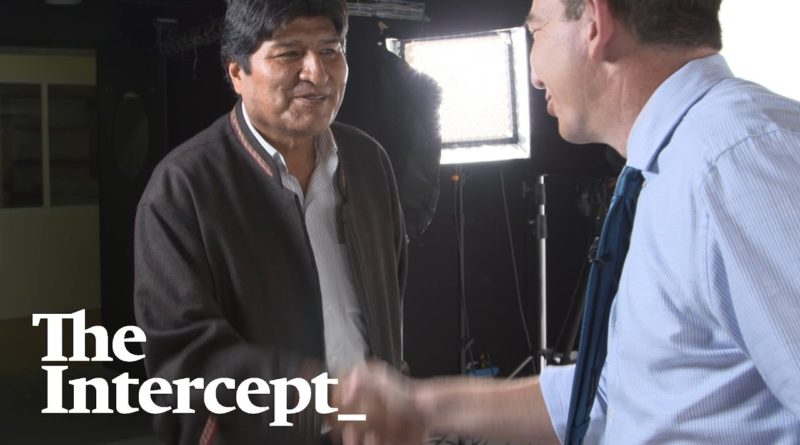 On November 10, Evo Morales, who served as president of Bolivia for 13 years and presided over extraordinary economic growth and a reduction of inequality praised even by his critics, announced that he was resigning the presidency under duress, with implicit threats from the Bolivian military. Morales later made clear that he viewed these events as a classic right-wing military coup of the kind that has plagued the continent for decades, explaining that he was removed from his position by force and then ultimately pressured by a police mutiny and military threats to flee his own country.

Morales went to Mexico, where he was granted political asylum, and has lived under heavy security in Mexico City ever since (earlier this week, he was granted refugee status in Argentina). On December 3, I sat with Morales in Mexico City for an hourlong interview that was wide-ranging in scope: not only about the events that led to his removal and exile from Bolivia, but also broader trends in regional and global politics, as well as the role played by the U.S. in Latin America.

We discussed who was behind this coup, what its motives are, the role played by both the U.S. and Brazil, the use of violence by the right-wing “interim” government against Indigenous protesters, the criticisms voiced against him for seeking a fourth term despite constitutional term limits, and how his removal by military force in favor of an unelected right-wing coup regime — led by the country’s right, white, Christian minority — reflects broader trends in Latin American politics and global political trends generally.

We also discussed the once-notorious but now forgotten extraordinary event in 2013, when Morales’s presidential plane was forced to land in Austria as he was traveling back to Bolivia from a state visit in Russia, on the pretext that the U.S. believed he had Edward Snowden on board and was taking him back to Bolivia for asylum. And Morales was particularly insightful on the role played by Bolivia’s deals with China to sell lithium, and its alliance with Russia, and why those relationships so infuriated the U.S.

RELATED CONTENT: Evo Morales Meets with Leaders of Bolivia and Creates the Manifesto of Buenos Aires

I was not sure what to expect from this interview. After all, Morales had suffered a violent military coup that forced him from his country only weeks earlier, and I thought that — brimming with anger and resentment over recent events — he might be unwilling or unable to do much more than offer platitudes about the injustices, repression, and military violence in his country that forced him to flee.

But that expectation proved untrue. Morales was incredibly thoughtful, reflective, insightful, and analytical about virtually everything we discussed, not only about Bolivia but also regional and world politics. As someone who presided over a left-wing success story for 13 years in the U.S.’s backyard, he obviously has a unique and sophisticated perspective on a wide range of geopolitical events, and that wisdom shaped the interview. As a result, I regard this as one of the most informative and compelling interviews I’ve done. I hope you’ll watch the full 50-minute video as I believe it’s well worth your time, providing a sophisticated perspective rarely heard in the mainstream press.