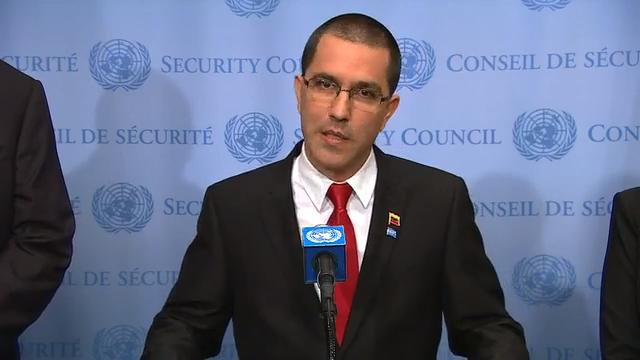 In a herculean effort to prevent war, and protect the integrity of his country, Venezuelan Foreign Minister Jorge Arreaza held a breathtaking schedule of events at the United Nations, including a meeting with the Secretary-General, consultations with the envoys of 60 member states supporting Venezuela’s sovereignty, a press conference the evening of February 22, speaking at a Security Council meeting February 26, and presenting an address at the UN Human Rights Council in Geneva on February 27.

Arreaza’s encyclopedic knowledge of history is one of his powerful assets, as he patiently clarified to reporters, at last Friday’s press conference, the reality of US instigated economic warfare underlying Venezuela’s current crisis. At one bizarre moment, a European reporter, asked, Mussolini-style, about a report that Venezuelan armed forces shot an unarmed indigenous person, and compared the incident to “what happened in China.” Arreaza asked whether the reporter had seen the incident, and, evading Arreaza’s question the reporter continued: “Is your government giving specific orders to shoot unarmed people, and what will happen to those who refuse to comply with these orders?” The stupefying question, less a query, and more unsubstantiated innuendo, was asked with such arrogance and grandiosity that Arriaza, fully aware of the insinuation intended, replied:

“Your question is full of venom and very poisonous. The army of Bolivar has never had orders to fire on the civilian population, and you should be the first to assess the reliability of false ‘reports,’ and false flag operations. It is your responsibility as a reporter to be smart, astute, and delve into the truth, and recognize propaganda.”

What was unmistakable, throughout last week, and again at Tuesday’s Security Council meeting, is Arreaza’s passionate effort to prevent the bloodbath of military confrontation, reiterating the historic context of the Venezuelan crisis to reporters and diplomats who may have a stunted recognition of the barbarous – but often ingenious – methods used by Washington to impose domination and de facto slavery on nations in Latin America. Theirs is virtually a scientific formula – economic destabilization, a relentless media disinformation campaign, and if the current target – in this case Venezuela – does not submit to domination, ultimately military force will be decisive in inflicting regime change, installing a docile, subservient puppet. The horrific example of the overthrow of Allende in Chile is merely one example.
In view of the usual perception of indigenous people as vulnerable and marginalized, it was therefore extremely interesting to see a New York Times report, February 23, confirming that “Indigenous leaders seized General Jose Miguel Montoya Ramirez, the head of Bolivar state’s National Guard force, and some of his subordinates, two opposition lawmakers from the area said in interviews….the lawmakers said it was unclear how long the indigenous leaders intended to hold the captives.” It is obvious that it would not be possible for “vulnerable” people to seize a Venezuelan General and the head of Bolivar state’s National Guard unless the “vulnerable” people were powerfully armed. And where the indigenous people got the arms from is an even more interesting question. It is not a minor accomplishment to kidnap the General of a National Guard force.

The Wall Street Journal on February 25, 2019 headlined: “Maduro’s Opposition Urges Military Force in Venezuela,” making inescapable that the Venezuelan opposition is either lobotomized, or heedless of the bloodbath military action will culminate in. The New York Times on February 25, page 4, has a large photograph of “innocent, unarmed” protesters preparing Molotov cocktails on Sunday along the Venezuela-Colombia border.

The Security Council meeting Tuesday, February 26, was preceded by an asinine lineup of eight members of the European Union, demanding that Venezuela immediately call elections. Evidently ignorant of the fact that former U.S. President Jimmy Carter characterized the Venezuelan electoral process as “one of the best in the world,” and the US electoral process as “one of the worst,” these European proxies were better suited to comic parody in a Mozart opera than to intervention in matters of war and peace. And, of course, who is to determine that, even if new elections are called, they will be either free or fair. Obviously, the result will be as Washington directs its European colonies to approve.

It would not be possible to avoid reference to U.S. Senator Marco Rubio’s gruesome tweet, threatening Maduro, and not incidentally Kim Jong Un, with hideous death by torture, including sodomization with bayonets before his murder. These horrific actions were committed by those “vulnerable, peaceful Libyans” for whom the UN Security Council, enacting Resolution 1973 and “Responsibity to Protect,” in the unforgettable words of Indian Ambassador Puri, were authorized to “bomb the hell out of Libya.” It is very likely that the Venezuelan opposition, especially those thugs, photographed by The New York Times on February 23 preparing Molotov cocktails, are the same breed as those Libyan monsters who, among other tortures, sodomized President Khadaffi with a bayonet before murdering him. No doubt Kim Jong Un will duly note this threat, and perhaps Maduro will ponder Khadaffi’s mistake in surrendering his nuclear program.

Today’s Security Council meeting, with the failure of both the US and Russian drafts, included Elliott Abrams regurgitating the same dangerous and deadly platitudes as always. The double veto of the US draft, by both China and Russia, saved the Security Council from endorsing another catastrophic military intervention.