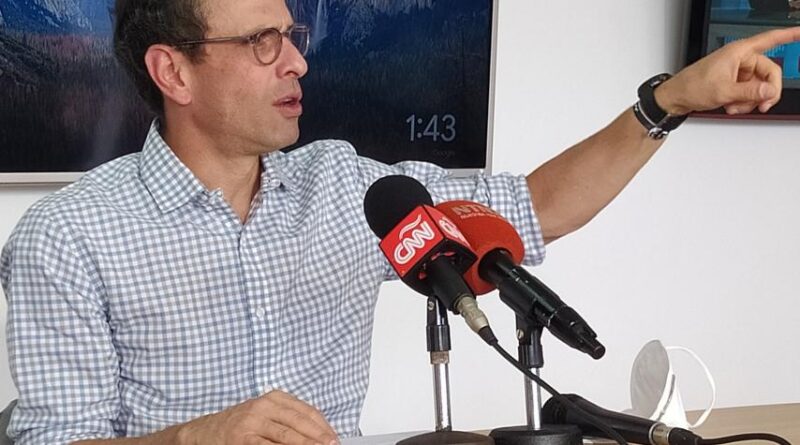 Venezuelan opposition leader Henrique Capriles-Radonski urged the opposition to re-evaluate its strategy and sit at a negotiating table with the government of President Nicolás Maduro, in order to seek a solution to the “political crisis” in Venezuela.

“The free world… urges a negotiated political solution. I do believe that this negotiation process has to be built,” said Capriles during a press conference with international media in Caracas on Monday afternoon.

“On the side of Chavismo, there are people who would like to negotiate,” added the politician during a meeting with foreign correspondents held this Monday, January 25 in Caracas. “Last year there was a first effort, it did not go to the end,” he said, without specifying that on behalf of Chavismo, President Maduro applauded Capriles’ initiative last year, but then Capriles suddenly changed his mind and joined the forces of the extreme right boycotting the parliamentary elections.

In Capriles’ view, the strategy has to change. “If we do not have a strategy based on reality, our strategy will never be able to advance,” said the leader, who is now betting on a possible reunification of the opposition. According to analysts, Capriles might be gathering his strength for the upcoming gubernatorial race in Venezuela, expected to be held by December 2021.

In this sense, he proposed a “negotiation with two arms”: the humanitarian, focused on controlling the COVID-19 pandemic; and the political, focused on appointing a new electoral authority in the National Electoral Council (CNE) and establishing a schedule that includes presidential elections.

Recall that self-proclaimed Juan Guaidó dismissed negotiations with President Nicolás Maduro, while acting as a servant of countries like the United States and Europe, and encouraging international sanctions to maintain pressure on Venezuela.