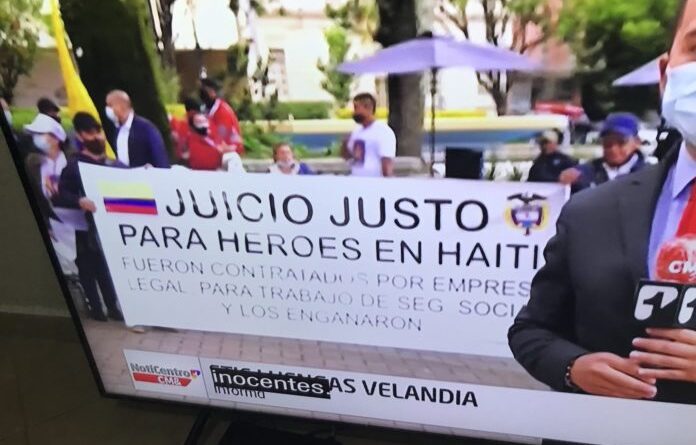 The government of Iván Duque this week spoke up in defense of the Colombian mercenaries who assassinated Haiti’s president Jovenel Moïse at his official residence in Port-au-Prince on July 7.

PSUV deputy Diosdado Cabello, during his television program Con el Mazo Dando, referred to statements issued by Colombian officials who,  before multilateral organizations, decided to intercede in favor of the former Colombian military personnel involved in the assassination.

“The latest is that the [Colombian] Ombudsperson’s Office asked the Inter-American Court of Human Rights and the OAS for precautionary measures in the case of the Colombian mercenaries who are detained in Haiti for the assassination of Jovenel Moïse,” said Cabello. “Colombia came out to defend its mercenaries.”

In addition, Cabello displayed items published by Colombian news outlets reporting how the relatives of the accused “asked, among other things, that they not call their loved ones mercenaries.” He added that in the midst of these demands a group of people displayed banners demanding “a fair trial for heroes in Haiti.”

RELATED CONTENT: Massacres in Colombia Continue: More Than 60 so far This Year

Terrorism industry
On the other hand, Diosdado Cabello recalled that Iván Duque, who sent terrorists contracted to kill the president of Haiti, tried to impose another false positive concerning the alleged attack against him, for which Duque is trying to hold the government of President Nicolás Maduro responsible.

“By the way, one of the military ‘heroes’ captured in Haiti is under investigation for false positives in Colombia,” recalled the first vice president of the United Socialist Party of Venezuela (PSUV). In Colombia’s false positive (falsos positivos) scandal, members of the military lured innocent Colombians to remote parts of the country with various deceitful promises, then killed them and presented their corpses as those of guerrilla insurgents in order to receive promotions, bonuses, and other military benefits. In addition, another mercenary is the cousin of Ivan Duque’s National Security Advisor, Rafael Guarían.

Likewise, Cabello cited a statement by the Vice President and Foreign Minister of Colombia, Marta Lucía Ramírez, who said that she spoke personally with the relatives of the military personnel involved in the terrorist actions that ended the life of the head of State of Haiti.

Featured image: Expensive poster—of the type printed at Kinko’s—in Colombia demanding a “fair trial for our heroes in Haiti, they were hired by legal ‘social’ security companies and they were tricked.” Colombia never ceases to amaze people around the world, commented Orinoco Tribune’s editor. Photo courtesy of RedRadioVE.