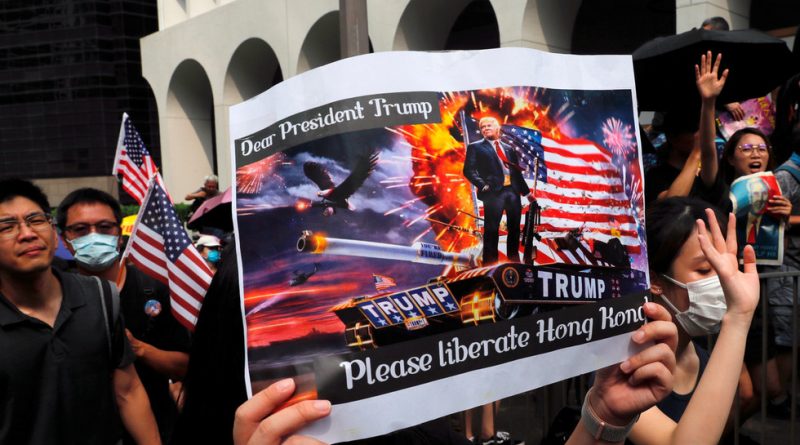 Hong Kong protesters rallied in their thousands and clashed with police in fresh unrest. They even called on Washington to “liberate” them from Chinese rule, suggesting some may now view the US as their patron.

Thousands of demonstrators marched to the US Consulate in Hong Kong on Sunday, in what they said was an appeal to President Donald Trump to intervene in the weeks-long political turmoil. Videos of the rally show protesters waving American flags as they sing the US national anthem and play ‘The Star Spangled Banner’ through the speakers on their phones.

Some signs of protest used to drum up support for the cause have raised questions about the factual accuracy of the messaging. According to the Global Times, a banner attached to an overpass erroneously claimed that “China owes America $1 trillion.”

#HK radical protesters fail to get the facts right on a banner which states that “China owes US$1 trillion.” Here is a free lesson: As of May, the US owes China about $1.11 trillion, not the other way round. #香港 pic.twitter.com/hky6WCDJqA

Footage from the city also documented flagrant acts of vandalism targeting the infrastructure and public transportation. In one video, a staircase was spray-painted with an inspiring message, “fight for freedom,” accompanied by a swastika.

The protesters – many of them masked and armed with metal rods and clubs – also erected street barricades, which were then set ablaze. Police used tear gas to disperse the unruly crowds.

Videos – not always publicized by the mainstream media – also show aftermath of vandalism as anti-government unrest enters its 14th week.

Beijing has repeatedly accused Washington of fueling the political turmoil, a claim that became more difficult to refute after a senior American diplomat was seen meeting with protest leaders.

With their direct appeal to Trump, it appears that many of the protesters are not interested in negotiating directly with the government. Hong Kong had already officially withdrawn the controversial extradition bill with China that sparked the unrest.