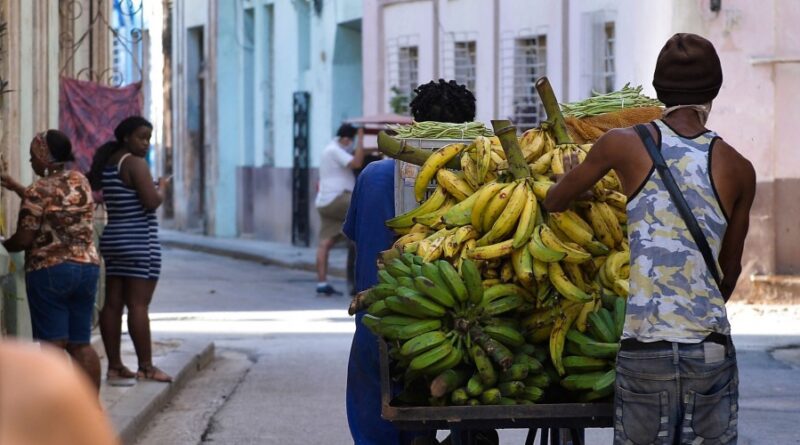 While President Joe Biden dithers about when or whether to keep his campaign promise to roll back Donald Trump’s economic sanctions on Cuba, people on the island are going hungry. Cuba imports 70% of its food and its foreign exchange earnings have plummeted due to the cut-off of remittances by Trump and the closure of the tourism industry by COVID-19. Increases in world market prices for food have aggravated an already precarious situation, producing severe shortages and a looming humanitarian crisis.

Hunger has been a weapon in Washington’s arsenal against Cuba ever since Dwight D. Eisenhower sat in the White House. In January 1960, Ike suggested blockading the island, arguing, “If they (the Cuban people) are hungry, they will throw Castro out.” In April 1960, Deputy Assistant Secretary of State for Inter-American Affairs Lester D. Mallory proposed, “Every possible means should be undertaken promptly to weaken the economic life of Cuba… to bring about hunger, desperation and overthrow of government.”

Even though the United States no longer prohibits the sale of food to Cuba, by intensifying economic sanctions, Washington impedes Cuba’s ability to earn enough money to buy adequate food supplies from anywhere.

President John F. Kennedy imposed the most comprehensive economic embargo that the United States has ever imposed on any country, including prohibitions on both food and medicine sales. The core of that embargo has remained in place ever since.

From 1975 to 1992, Cuba could buy goods from the subsidiaries of US companies in third countries. Ninety percent of the $700 million in goods Cuba bought annually was food and medicine. President George H. W. Bush, with presidential candidate Bill Clinton’s support, signed the 1992 Cuban Democracy Act, cutting off those sales just as the Cuban economy collapsed due to the loss of Soviet aid. Cubans went hungry then, too. “Food shortages and distribution problems have caused malnutrition and disease,” the CIA reported in August 1993.

The Trump administration’s campaign of “maximum pressure” was designed to block Cuba’s sources of foreign exchange earnings by limiting US travel, remittances, and Cuba’s earnings from the export of medical services. The goal, Secretary of State Mike Pompeo told European diplomats, was to “starve” the island to bring down the regime. So far, President Biden has left all these sanctions in place. Moreover, by exacerbating food shortages, forcing Cubans to stand in line for hours in the midst of the pandemic, US policy also impedes Cuba’s ability to control the spread of COVID.

The international community regards using food as an instrument of coercion to be a violation of international humanitarian law. In 2018, the UN Security Council voted unanimously to approve Resolution 2417, which condemns the deliberate deprivation of food “in conflict situations” as a threat to international peace and security. Resolution 2417 focuses on armed conflicts, but the underlying principle is no less applicable to conflicts in which one country has the ability to impose food insecurity on another, even without the use of armed force.

The international community has also made clear what it thinks of the US embargo. Since 1992, the United Nations General Assembly has annually voted overwhelmingly for a resolution calling on the United States to lift the embargo because of its “adverse effects… on the Cuban people.” In 2019, the vote was 187 in favor, three against (the United States, Israel, and Brazil).

The Biden administration has yet to complete its review of Cuba policy, but officials, when asked, never fail to say that it will center on democracy, human rights, and “empowering the Cuban people.” In his confirmation hearing, Brian Nichols, Biden’s nominee to be Assistant Secretary of State for Western Hemisphere Affairs, declared, “We should be focusing our efforts on what is best for the Cuban people.”

No long, drawn out policy review is needed to recognize that there is a food crisis in Cuba due in part to US policies, and that helping alleviate it is a moral obligation—an extension of the ”responsibility to protect.”

On Cuban Independence Day, Secretary of State Anthony Blinken addressed the Cuban people directly, assuring them, “We recognize the challenges many of you face in your daily lives,” and pledged, “We will support those improving the lives of families and workers.”

Fine sentiments, but their sincerity is belied by the Trump-era sanctions that the Biden administration has done nothing to change, sanctions that make the daily lives of Cuban families harder. Having enough to eat is a basic human right, too, as President Franklin D. Roosevelt affirmed when he included “Freedom from Want” among his “Four Freedoms.” Article 25 of the Universal Declaration of Human Rights, which the United States signed, includes adequate food as a right.

If President Biden wants to support human rights in Cuba and empower the Cuban people, he can start by alleviating the food crisis by ending Trump’s prohibition on remittances and restoring the right of US residents to travel. Remittances put money directly into the pockets of Cuban families. Restoring the right to travel will help Cuba’s ailing private sector recover post-COVID. The resulting inflow of foreign exchange currency will enable the government to import more food, especially for marginalized populations—single mothers, the elderly, and the poor—who have no direct access to hard currency.

There is no excuse for delay. No long, drawn out policy review is needed to recognize that there is a food crisis in Cuba due in part to US policies, and that helping alleviate it is a moral obligation—an extension of the responsibility to protect. Moreover, these are actions Biden promised he would take during the presidential campaign. Every day he delays is another day that Cubans go hungry.

Featured image: Men transporting bananas for sale in Havana, on May 22, 2021. The US blockade against the island nation is creating a food shortage which is assuming the proportions of a humanitarian crisis. Photo: Yamil Lage/AFP