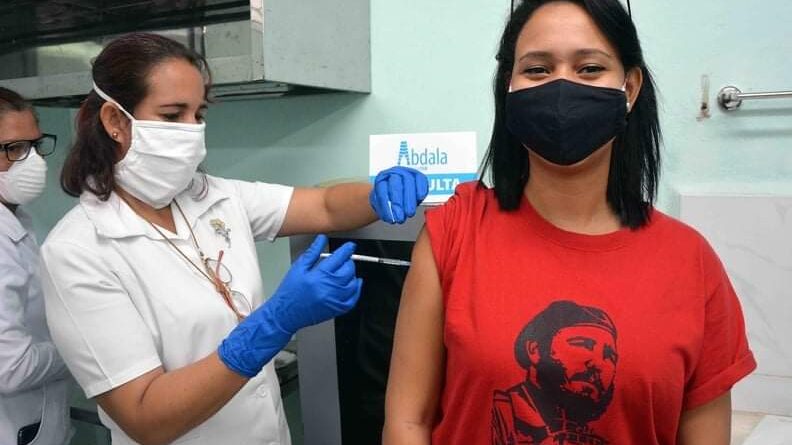 In March, social organizations, political leaders, and solidarity movements launched a fundraising campaign to send syringes to Cuba. The world wants to support the vaccination process of this small nation, which has done so much to fight COVID-19 even beyond its borders.

The campaign has gained momentum and size as the days have gone by. The initiative began in Europe, thanks to the Cuba Linda and France-Cuba Associations, and today it is spreading throughout the Americas. “Blockade Kills, Solidarity Saves Lives” is the slogan of the cause that is attracting everyone’s attention in Honduras, Nicaragua, Argentina, Canada, the US, and other countries around the world.

“In France, we have raised 30,000 euros to date, equivalent to 374,000 needles and syringes,” Cuba Linda assured, and explained that they are looking forward to collecting 10 million of them, which will allow the Cuban authorities to immunize their entire population in record time, as planned. The UK Cuba Solidarity Campaign has also launched a campaign to raise funds for syringes, vials and other medical supplies.

The world knows about Cuba’s efforts to face the pandemic. Amid the most difficult economic situation, the country set out to leave no one unprotected, and it has done so in the most challenging way possible, being a blockaded country with no resources to create its own vaccines.

“In light of Cuba’s extraordinary commitment and response to the fight against COVID-19, not only at home but in 52 nations around the world, it is the least we can do. We see it as a solidarity project,” said Bob Schwartz, CEO of US Global Health Partners, an organization that recently joined the campaign.

In the US, several Cuban solidarity groups have set out to raise funds to buy even more than the syringes proposed by Cuba Linda and France-Cuba. According to Schwartz, “Global Health Partners, Code Pink, MEDICC, and the Center for Cuban Studies plan to send five ship containers with over 10 million syringes to Havana.”

Honduran doctors who graduated from the Latin American School of Medicine (ELAM) and other universities in Cuba also joined the call, and are asking the Cuban community living in Honduras to also collaborate in the fundraising effort.

“People have responded, even though the economic situation in Honduras is adverse because unemployment has increased and salary payments have been delayed due to the pandemic,” explained Elena Flores, president of the Honduras-Cuba Association (AHC).

Given the lack of air connection from the Central American country to Havana, a situation that prevents the syringes from being sent to the island, the Honduran doctors opted to send the raised funds to Panama. There, several solidarity groups will buy and transfer the supplies to the Caribbean country through Cuban Airline (Cubana de Aviación).

Cubans living in Nicaragua are doing the same. According to Prensa Latina, up to 130,000 syringes have been collected in Managua. “We have already made two bank transfers to Panama, amounting to US$4,479,” confirmed Rafael Ruiz, representative of the Augusto C. Sandino Anti-imperialist Solidarity Network.

The solidarity campaign comes at a critical moment of the vaccine roll-out when Cuba needs it most. Healthcare authorities have already begun immunizing residents in Havana, the Cuban capital which is the city most impacted by the pandemic in the country. In the island, over 1,000 cases have been registered per day for the past two months. At least half of those daily cases were reported in the capital.

The government expects to vaccinate the country’s entire population as early as August. The donation of syringes will be essential for this purpose. Why? Because the over 200 restrictions imposed during the Trump era (2017-2021) are threatening to squeeze the Cuban economy even harder.

Besides the global shortage of syringes and rising prices, Cuba faces another equally complex challenge. The island can purchase medical—and any other—supplies from a very small number of countries.

Due to the blockade, few nations are willing to sell products directly to Cuba because of the million-dollar fines the US imposes on anyone who dares to do so. The island nation is forced to buy everything through third countries, which makes each product more expensive, causes delays in shipments, and generates shortages.

Although Cuba has the best record in Latin America in controlling COVID-19, the disease is reaching its peak and vaccination is key to stopping it. As US President Joe Biden looks on motionless at Cuba’s efforts to pull its economy forward, and protect its people from the deadly virus, the rest of the world is rallying around this tiny island. Cuba is not alone; it never was, it will never be.

Featured image: Cuba intends to vaccinate the entire population by August this year, and the world is rallying around to send syringes and other medical supplies for it. Photo: Miguel Rubiera Justiz /ACN