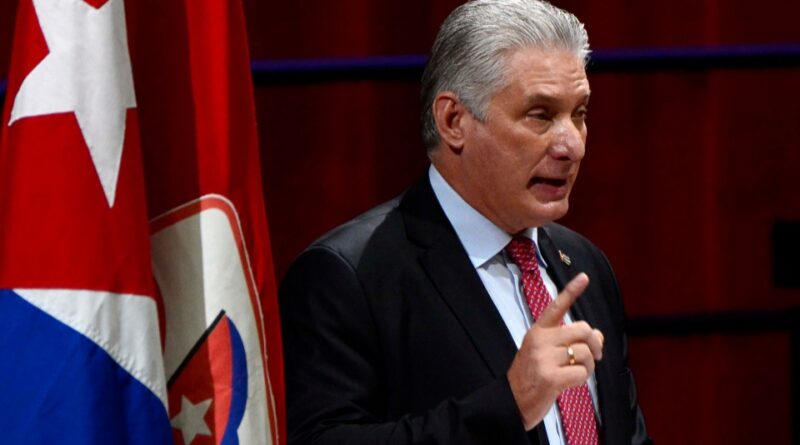 Centering on the congress’s theme of continuity, Díaz-Canel’s speech was impassioned, far-reaching, and clear. He called upon the new party leadership to respond to an increasingly restrictive U.S. economic blockade, speed up the implementation of economic reforms, and deal with the economic fallout from the pandemic.

The Eighth Congress took place 60 years after both Fidel Castro’s declaration of the socialist nature of Cuba’s Revolution and Cuba’s victory over counter-revolutionaries at the Bay of Pigs. That timing may add significance to Díaz-Canel’s speech; the longer U.S. hostilities last, the sooner they will end.

Maybe Cuba will have soon a free hand—or maybe not. Either way, a speech at a watershed moment that documents plans, aspirations, and problem-solving proposals will be of interest to historians.

What follows are excerpts from the president’s speech chosen because of relevance and significance. The entire speech may be read in Spanish here. At this writing, no English-language version of the speech has appeared on the internet.

Honoring former President Raúl Castro, Díaz-Canel expressed “gratitude for his patient labors of many years, which we declare to be a milestone in our political history: This is the Congress of Continuity … Comrade Raúl has prepared, directed, and led this process of generational continuity.”

Raúl Castro’s Central Report to the Congress told the truth
“It exposed specific challenges that confront our country, in particular those associated with attempts at domination, the hegemony of U.S. imperialism, and the brutal blockade whose extraterritorial impact strikes at us on almost all fronts. In the last four years, it escalated to qualitatively more aggressive levels… That barrier constitutes the principal obstacle for the development of our country and for moving ahead in the search for prosperity and well-being…

“In asserting this truth, there is no intent to hide the deficiencies of our own reality, which has been repeatedly discussed. In the last three decades, the economic, commercial, and financial blockade [has been] intensified opportunistically and with evil intent in periods of great crisis so that hunger and misery might provoke a social explosion that undermines the legitimacy of the Revolution.”

Cuba’s economy faces difficulties.
“This Congress’s five-year appraisal does not show good economic results. Inefficiency and ineffectiveness influenced the performance of a significant part of the entrepreneurial and the budgeted sectors. Structural problems shape outcomes. We’ve been unable to avoid extra expenses that turned out not to be necessary for this period. We’ve seen inadequate control of material and financial resources as well as avoidable obstacles and bureaucracy…

“Cuba has provided a magnificent lesson of how a complex problem like the pandemic can be confronted through political will, the humanistic vocation of the Revolution, governmental operations, public policies centering on the human being, and dialogue among decision-makers and scientists and with the Cuban people…

“We must resolve the challenge of producing the food that we need and must use and take advantage of renewable sources of energy. We must create sustainable and high-quality tourist facilities, achieve efficiency in investment processes, orient national production to satisfy internal market demands, and raise the quality of all services offered to the population. We must also bury the importation mentality. We must do all this in the least amount of time, through our own efforts, on the island, with as little foreign dependency as possible.”

The Revolution is strengthened by its achievements
“Despite the blockade, our country has been successful in sustaining its principal services, cared for all infected people and anyone suspected of infection, mobilized a score of molecular biology laboratories in record time, designed and created national prototypes of pulmonary ventilators and diagnostic kits, and developed five candidate vaccines. We’ve arranged to produce doses enough for immunizing the entire population and contributing to other nations…

“All of this is much more than light at the end of the tunnel. It’s proof that we are on the right side of history, that revolutionary and socialist endeavors have so much potential and reach… When men and women in white coats, members of a Henry Reeve Brigade, come down the gangway, raising on high the flag with the solitary star… the lies and infamies against Cuba begin to dissolve like ice in warm water.”

The Revolution won’t survive without unity and overcoming divisions created by US machinations
“In the face of the unjust international order imposed by broken and discredited neoliberalism, Cuba maintains a line of action that inspires admiration… But this posture provokes frustration, desperation, and impotence in our northern neighbor and its acolytes, the sell-outs and annexationists, those who are submissive and unworthy and who give in to the designs of the empire.

“Our sworn enemies go about thinking up the most perverse plans to attack the Revolution, create distrust, and break up unity. The Cuban revolution won’t be betrayed or given over to those who… toy with the fate of the homeland.”

The party is Cuba’s defense against disunity and corruption
“Its history can be summarized in two words: people and unity. That’s so because Cuba’s Communist Party has never been an electoral party; it wasn’t born out of any break-up [split]. It was born out of the unity of all political forces whose deeply humanistic ideals came about from the struggle to change an unjust country with great inequality. Our country was dependent on foreign power and under the yoke of a bloody military tyranny.

“The militancy of the party serves to mobilize the energies of the country toward objectives of development, particularly food security and sovereignty; industrial development; dealing with the energy problem. But always, and at the top of the list, it prepares for defense, strengthening institutional order, and the socialist rule of law…

“The main premise… is never to lie or violate ethical principles. The solid authority of the party rests on those values… Our obligation is that of standard-bearer in the struggle against corruption, dishonest ways, abuse of power, favoritism, and double standards.

“Themes of urgent attention in our party schools include party discipline, collective leadership, theoretical studies, and an insistence upon the viability of socialism, Marxist-Leninist ideas, and the traditions of Cuban thought, particularly those of Martí and Fidel… To function as a true vanguard, our leadership must be capable of projecting itself as truly concerned about the functioning of society and powerful enough to proclaim and mobilize against whatever plan enemies of the Cuban nation conceive of to provoke a social explosion.”

The future of Cuba’s Revolution depends on young people
“Generational continuity is part of [our] unity. It’s appropriate to speak and share what’s happening with our young people as the most important people that they are, to distinguish them as protagonists of transformations on the way. They have the force, disposition, decisiveness, and sincerity required for whatever project or revolutionary contribution the situation demands. They have shown courage and responsibility as we look to the end of the pandemic.

“Social media is a tool for revolutionary advocacy as well as a tool used by our enemies. We need to look for the most agile, brief, and novel ways to communicate our training efforts. In the era of the internet that now permits millions of Cubans to gain a fixed perception of the world through a cell phone, our messages to our militants can no longer go out on the old print-media route…

“But there are sociopaths with digital technology available and ready for open war on reason and feelings. They attack not only our political system but also manipulate people’s real and immediate needs with which we are connected as a species … Powerful groups—mostly in highly developed countries—can convert universal ideas, wants, emotions, and ideological currents into a dominating force, often out of context. For these communication magicians, truth is negotiable but even worse—disposable.

What about Revolution?
“I say it without complaint. In a true Revolution, victory is about having to learn. Our route is an untested one. Our challenge is to innovate constantly, changing everything that has to be changed, without renouncing our firmest principles, without ever departing from the concept of Revolution that the undefeated leader of this venture [Fidel Castro] left to us. We must be free of rigid thinking and conscious of possible mistakes that go along with making a road to walk on.”