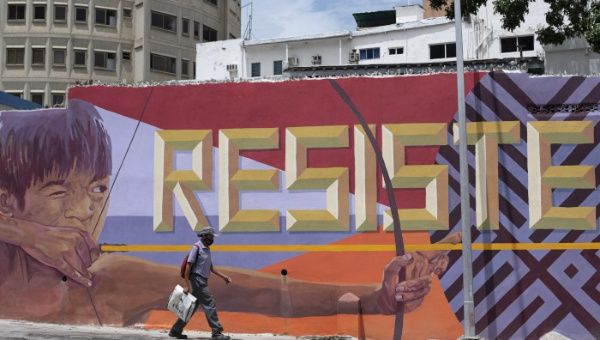 By now it is obvious that the mainstream media does not cover any good news whatsoever about Venezuela.  Even non-political issues are always accompanied by a poisoned cliché sentence or two about “dictator,” “authoritarian regime,” “collapsed economy,” “humanitarian crisis,” etc. etc.

So, the game-changing news that there are peace talks being held in Mexico City between the Venezuelan government and opposition parties is ignored. Mexico is acting as host and facilitator, with the kingdoms of Norway and Netherlands, and the Russian Federation as mediators. This seminal event has been scarcely reported by the North American media or commented on by politicians. Not a peep. Perhaps it is because neither the USA nor Canada have been permitted to be part of these negotiations, although certainly the USA has tried, and failed, to worm itself in.

There are two reasons why these negotiations are a landmark for the region.

Firstly, because of the exclusion of the USA and its sidekick, Canada. Only Venezuelans are sitting around the table making decisions, trying to resolve their own political problems. A Latin American serious peace talk without the oppressive presence of the North, has rarely happened, if ever.

Secondly, it is a landmark in that it is an evident accomplishment of the Venezuelan Bolivarian government that has prevailed under the most savage USA/Canada/EU illegal economic war and has prevailed over serial attempts to violently overthrow it. President Nicolás Maduro, unfairly demonized worldwide, had called for dialogue with the opposition more than 100 times these last few years. He can certainly consider these talks a huge vindication of his strategy and search for peace and security for his nation.

The head of the government delegation is led by the president of the National Assembly, Dr. Jorge Rodríguez, and the various opposition parties are being led by the lawyer Gerardo Blyde. The opposition is now calling itself Plataforma Unitaria (United Platform) and consists of the opposition parties: Un Nuevo Tiempo, Primero Justicia, La Causa R, AD, COPEI. These parties are constantly at each other’s throats, especially since the group includes the most extremists among them.

RELATED CONTENT: The Three-Act Tragicomedy of the Venezuelan Opposition

On 13 August 2021 the parts signed a Memorandum of Understanding setting the rules and objectives of the dialogue. This was a first huge step because they unanimously agreed to:

• Reject any act of political violence against Venezuela, its State, or institutions. This is no small achievement because sitting at the table are those who for years supported and promoted coup d’etats, and acts of terror and violence against the Venezuelan institutions and people.
• Accept dialogue and negotiation for the peace and security of the nation.

The significance of this MOU is that

• The extremist opposition parties at long last recognize the Venezuelan State, political institutions, and the legitimacy of President Nicolás Maduro. Previously, they had refused any dialogue alleging that Nicolás Maduro was not a legitimate president and demanding his resignation or new elections (which would have been against the Constitution) before they would even sit down to talk.
• It spells the end of the US attempt to create a bogus alternative government with the fantasy that Juan Guaidó was any sort of president.
• It indicates the end of the vicious Canadian absurdity of the Lima Group created solely to overthrow the Venezuelan government. Shockingly, at present, during an election campaign, not one Canadian media or party leader has reported the utter failure of this Liberal Party strategy of aggression towards Venezuela.

• To work to have the illegal sanctions against Venezuela eliminated so that it can obtain the resources needed to serve the needs of the population especially those related to the pandemic.
• A firm ratification and defense of the sovereignty of Venezuela over the eastern territory known as the Esequibo, bordering on Guyana. (Exxon-Mobil has their eye on this ages-old land dispute and has been fanning the flames of discord between Guyana and Venezuela).

The first decision absolutely changes the political scene in the country, considering that those signing are the parties who went cap-in-hand to the US, Canada and EU asking for the sanctions. Now they are going to have to try their hand at eliminating them.

It will not be so easy to put the genie back in the bottle. However, there was an excellent consequence of this accord: on September 14, the IMF handed over to Venezuela $5.1 billion, thus increasing by 83% its foreign reserves. These funds are for the costs related to the pandemic. This is no loan.

On March 17, 2020, at the moment of world-wide anguish and uncertainty due to the start of the pandemic, Venezuela asked the IMF for $5 billion to obtain medicines and medical equipment. It was flatly, inhumanely, and unjustly denied. Venezuela has every right to these funds because the IMF has an emergency account of $650 million for regional emergencies, and these funds are provided by the member nations, of which Venezuela is part. Venezuela was not asking for a loan, but a right, particularly facing a situation that was full of risk for the health of Venezuelans.

There is always the possibility, of course, that the opposition may kick the table and walk away, which they have done twice in the past. But, there are important circumstance today that make it unlikely.

• Demented Trump is no longer in the White House, the principal backer and financial supporter of the Venezuelan extremist opposition.
• There are now strong Democratic voices in the US Congress advocating the end of the Venezuelan sanctions and Joe Biden cannot simply ignore the more progressive wing of his own party.
• The extremist opposition has realized that without the support of a Trump, it cannot overthrow the Venezuelan government, and the only way it could ever gain any power has to be through elections. However, more than 83% of the population approve of the negotiations and poll after poll, show that the overwhelming majority of Venezuelans are against violence and coup d’etat. Therefore, there is no hope for votes for the opposition unless they renounce violence and stop the sanctions they promoted.
• The USA has just suffered a defeat and stunning humiliation with the war in Afghanistan. At this time, there cannot be much desire for military adventures in Washington, let alone against a Latin American country. There are sufficient voices in the political world realizing that the illegal sanctions have failed – they were geared to overthrow the Bolivarian government and could not.

It has been astounding to witness the strength of the Bolivarian Revolution and the firm support of the people who rallied against the attacks of the foreign- led opposition and their masters. Even the USA Chamber of Commerce now admits this failure and bemoans that US corporations have lost billions of dollars because of the sanctions. They lament that China and Russia, who very much respect the Venezuelan government, are now benefitting from a closer relationship and trade with Venezuela. Have they realized you catch more flies with honey than with vinegar?

As for dollars, Guaidó and his gang of thieves have cheated Venezuela out of its oil company and its foreign assets. The sanctions they sought and obtained resulted in 40 banks in 17 countries looting $6 billion from Venezuela. All in all, the country has been deprived, due to the sanctions and looting, of $350 billion. This is enough funds to provide the entire population with food and medicines for 26 years. It is 25 times the amount used to rebuild Europe after WWII.

Guaidó and company have also cheated the USA. In 2017-19 alone, USAID handed over though various NGOs an amount of $472 million for “Venezuelan humanitarian crisis” and for “democracy promotion.” To date, they do not have any clear idea at all where the money is or on what it has been spent. Also, there is no knowledge of what happened to the $2.5 million raised for the media stunt of the supposed “humanitarian invasion” of Venezuela on the Colombian frontier in February of 2020. If the Venezuelan justice system does not nab Guaidó and his gang, surely the USA’s will since, when it comes to money, they do not forgive one cent.

There is a general malaise in the country fearing that these thieves and terrorist will go scot free and not pay for the 100,000 people who have died due to the illegal economic war and blockade that has deprived the population of food and medicines, for the hundreds injured and killed during their street violence, for the various attempted coup d’etat, for the sabotages, attempted paramilitary invasions, for the attempted assassination of the President, for the many assassinations of Bolivarian leaders, in summary, for the treason they so surely have committed.

However, President Maduro has assured the nation that the negotiations in Mexico have nothing to do with the independent judicial processes which continue their proper development, and that there will be no impunity, but due process. Apart from the desire for justice, the desire that these criminals pay for their crimes, the truth is that if Guaidó, Vecchio, Borges, Rondón, Guevara, López and their ilk escape from paying for their multiple crimes against the people, it would leave the Venezuelan judicial system like a tiger without any teeth. In any democracy in the world they would be in jail. Who will respect a justice system that turns a blind eye to crimes of this magnitude? I do not believe this will happen. It would be a major scandal that would leave in tatters the rule of law, the government, and Bolivarian Revolution.

So let us celebrate these negotiations. They are a triumph of Mexico, Norway, Netherland, and Russia; a triumph of the Venezuelan government and also for the opposition that we hope are putting aside their mad violence. They are all ushering in a new political scenario in which there is real hope for peace and security for the Venezuelan people.

The media and politicians in USA and Canada can try to ignore these events, but the pace of history cannot be detained, and history is being made whether they like it or not.

Featured image: Mural in Caracas showing a Venezuelan indigenous man with an arrow fitted to a bow, with the word “Resiste” (Resist) written in huge letters. Photo: Xinhua