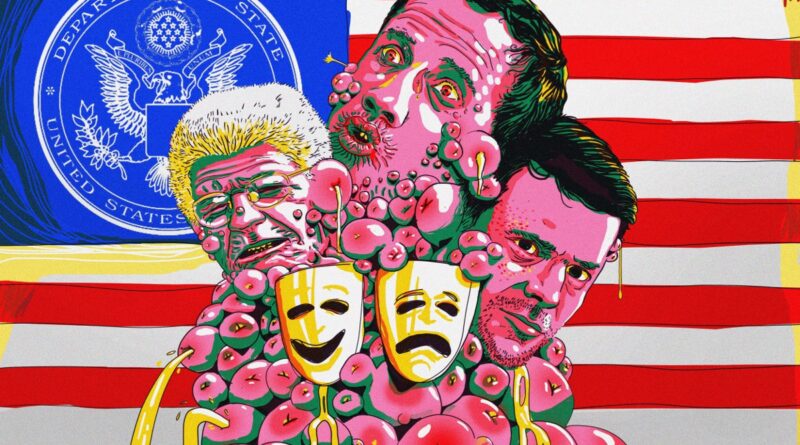 The history of the Venezuelan opposition since the arrival of Hugo Chávez’s Bolivarian Revolution has been one of gaffes, violence, infighting and shortsightedness.

While the corporate media has done its utmost to cheer on US-backed sectors and blame their failures on unsubstantiated claims that the game is “rigged,” the fact is that anti-Chavismo’s shortcomings spring from its very nature. The opposition’s leaders stem from a well of racist elitism that saw running the country as a birthright taken away by a low-class “populist” in 1999. Add to that their eternal umbilical cord to Washington, and the result has been a constant misreading of Venezuelan reality.

Dissecting the opposition’s strategies over the last 20+ years would be an interesting exercise. But for the purposes of this article we focus only on the latest chapter.

Act 1: The overplayed hand
When the opposition Democratic Unity Roundtable (MUD) alliance resoundingly won the 2015 legislative elections, it looked like the end was near for Chavismo. With rightist Mauricio Macri winning the presidency in Argentina and a coup underway in Brazil, corporate analysts and US leaders were jubilant about an imminent end to leftist experiments across the continent.

The MUD was emboldened and had the wind in its sails. With a firm legislative majority, control over one of the five powers of State, and a country facing an economic recession (that would only get worse), it is not unreasonable to argue that all opposition politicians had to do was stay the course, show (or pretend) that they the people’s interests at heart, agree on a unified candidate to run against Maduro in 2018 and take back the presidency.

Instead, newly elected opposition leaders got drunk with their minuscule power and overplayed their hand. Plagued by birthright-inspired egos, they tripped over each other to see who would be the one to “get rid” of Maduro. Democratic Action’s Henry Ramos Allup, the first to assume the National Assembly (AN) Presidency, even boasted that the government would be ousted within six months, despite this being well outside the remit of the AN’s competencies.

Boisterous bluster was soon followed by unconstitutional tomfoolery, with the opposition attempting to retroactively shorten the presidential term and charge Maduro with “abandoning office” (even though he was running the government just three blocks away from the Legislative Palace).

Chavismo did not sit idly by as the opposition suits tried to storm the presidency. Opening its bag of legal tricks, the government baited the arrogant and shortsighted lawmakers into muddy waters where they ended up getting stuck. Controversy surrounding electoral fraud allegationsagainst Amazonas legislators led to a legal battle against the Supreme Court, and the AN was eventually declared “null and void” for contempt of court. The opposition’s power plays were neutralized.

RELATED CONTENT: Elliot Abrams: The Venezuelan Opposition Must Stop Waiting for an Invasion

At a dead-end in its efforts to overthrow the government from the legislative branch, mainstream anti-government parties did not take a step back. Egged on by extremist figures like Maria Corina Machado and Antonio Ledezma, they shifted back to equally ineffective direct coup attempts.

Act 2: From insurrection to abstention
The early months of 2017 saw a renewed and bloodier spate of “guarimba” street violence. As in 2014 when guarimbas were notoriously led by Leopoldo López, anti-Chavismo’s gambit was to sow chaos on the streets in the hope that the government would surrender, the armed forces would step in or, for more fanatical sectors, US marines would arrive and save the day.

The ugly fascist head of an opposition that foams at the mouth at the prospect of having a dark-skinned bus driver as president was on full display. Well-armed and -funded “guarimberos” unleashed gruesome political violence, beheading motorcyclists and setting black people on fire. But with the full complicity of international corporate outlets, not only did the opposition get away with these crimes, but it also laid the groundwork for ludicrous “crimes against humanity” charges against the Maduro government.

The insurrection did not get very far, quickly boiling down to violent frat boys besieging their own middle-sector communities. Simultaneously, the Maduro government played what seemed like a very risky move to counter the violence: calling a national constituent assembly (ANC). Anti-government leaders, very high on their own supply, not only refused to take part but vowed that they would block the holding of the July 30 constituent elections.

If the opposition had half of the support it believed, simply running for the ANC would have thrown a spanner in the works. Instead, it did not just fail in its pledge to stop the elections. It held a pointless “consultation” and stood by as Chavismo regained the initiative with an all-powerful body.

Disoriented and with knives out, anti-Chavista figures proceeded to half-heartedly run in the October 2017 regional elections and sat out altogether in the December municipal ones. The government swept both, wiping out the progress made by the MUD in 2015.

But there was more to come. With the all-important presidential elections approaching, the hardline opposition entered into dialogue with Maduro only to walk away at the last minute (allegedly on US orders). Soon after, its leaders refused to throw their weight behind Henri Falcón in the 2018 contest. Falcón arguably had the ideal profile to challenge Maduro, being an ex-Chavista with a track record in office, but he was just not extremist enough for Washington’s taste.

Unable to do anything but cry fraud after losing or not taking part, anti-government parties left their fate in the hands of the Trump administration, which was beginning to ramp up its economic aggression against the Caribbean nation.

Act 3: The pretend presidency
Despite the opposition’s serious failings and lack of direction, the political crisis and severe economic recession had the Trump administration thinking that the moment to topple Chavismo had finally arrived. The White House brain trust had a plan: a virtually unknown lawmaker, Juan Guaidó, would proclaim himself “interim president” and then everything would fall into place. Either Maduro would fold or the armed forces would step in.

It is hard to overstate just how absurd the Beltway operators’ calculations were. Did they expect Defense Minister Vladimir Padrino López to read a threatening tweet from John Bolton and just call Maduro to tell him “it’s over”? Would Maduro just walk away because then US Secretary for State Mike Pompeo called him “the former Venezuelan president”? Did they think that a population with deeply ingrained anti-imperialist consciousness would just flock to support a US puppet?

RELATED CONTENT: Hinterlaces Poll Reveals the Most Unpopular Leaders of the Venezuelan Opposition

The choice of Guaidó was likewise remarkable. In a vacuum, having a figure with a relatively clean slate (mooning shenanigans notwithstanding) who looked like an Obama knockoff might have made sense. But just how anyone could still think that this plan was a good bet after meeting him is one of life’s unsolved mysteries.

Guaidó’s time in “office” has been very lucrative, with acolytes appointed to made-up posts and living off of Venezuelan assets seized by Washington and its allies. However, the young former lawmaker is farther away from the presidential palace than when he started two and a half years ago.

In this time, the self-proclaimed leader, his sponsors and his acolytes have gone from one harebrained scheme to the next, with spectacular coup effort failures dovetailing alongside scandals and backstabbing.

In a long list of memorable hits, two really stand out. On April 30, 2019Guaidó announced to the world that he was in a military base and the game was over for Maduro. Only he was not inside the base as much as he was right outside, and the putsch fizzled out quickly. A little over a year later, the opposition leader hired a deluded mercenary to organize an invasion and topple the government. “Operation Gedeon” was neutralized instantly and from then on it was just damage-control efforts.

Simultaneously, the Trump administration dramatically escalated its economic sanctions, unleashing untold suffering and causing tens of thousands of deaths. Again, the reasoning was that these murderous measures would generate enough chaos to force capitulation or a coup. And again, the policy architects underestimated the resilience of the Bolivarian Process just as much as they overstated the credibility of their surrogates.

Epilogue: rinse and repeat?
Long gone are the days when Guaidó would appear in pointless infomercialswith his mantra: “an end to the usurpation, transition government and free elections.” This August, with very few cards to play, the hardline opposition assembled a newly-minted “unitary platform” to negotiate with the government in Mexico. Guaidó will continue the charade as long as he can, even though Washington has allegedly put an expiration date on his circus.

US-backed groupings had to bite their tongue and field candidates for the November regional and local “mega-elections.” However the participation of “softer” competing opposition parties with whom the US-backed bloc is unwilling to cooperate means Guaidó and co. will only end up splitting the opposition vote, making life easier for the government once again. This is why the “democracy if we win, fraud if we lose” discourse is already being dusted off.

Apart from all its “qualities,” the Venezuelan opposition has also displayed a tremendous inability to learn from past mistakes. Its penchant for disunity and infighting has meant missing out on golden opportunities to capitalize on popular discontent at the polls. Add to that the disdain for the poor and working-class majority, and a neverending subservience to Washington, and the result is a recipe for repeated failure.