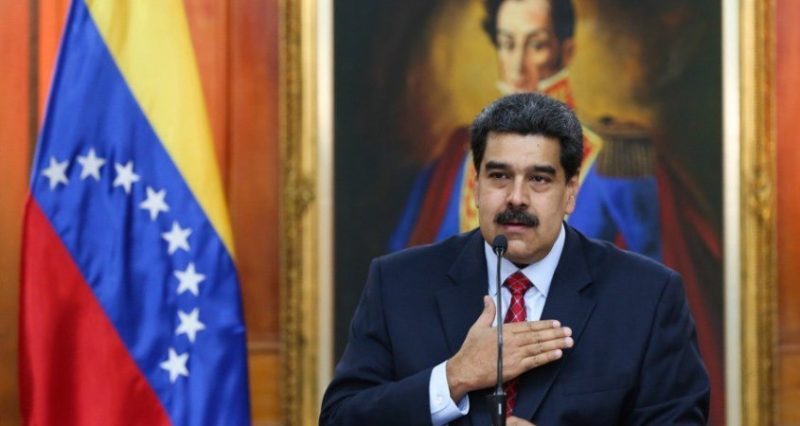 An internal government document reveals tactics of “economic warfare” and “financial weapons” the US is using against Venezuela in the name of “furthering capitalism.”

Venezuela has suffered from an economic crisis in recent years, and while the US government and corporate media outlets have blamed this hardship solely on the ruling socialist party, internal US government documents acknowledge that Washington has been using what it clearly describes as “financial weapons” to wage “economic warfare” on the oil-rich South American nation.

The quiet admission confirms what Caracas’ government has said for years: The United States is waging an economic war on Venezuela, the country with the world’s largest oil reserves.

Crippling sanctions imposed by the Donald Trump administration have bled Venezuela of billions of dollars.

The first United Nations rapporteur to visit the nation in two decades, legal expert Alfred de Zayas, told The Independent that the devastating international sanctions on Venezuela are illegal and could potentially be a crime against humanity.

Professor Steve Ellner, a leading scholar of Venezuela’s politics who has lived and taught in the country for decades, explained in an interview on Moderate Rebels that the sanctions have economically isolated Caracas: “The fear of retaliation on the part of the Trump administration has pressured the world economic community to lay off the Venezuelan economy. This amounts practically to a blockade of Venezuela.”

In early 2019, the Trump administration dug the knife deeper. On January 23, the US government initiated a political coup in Venezuela by recognizing the unelected right-wing opposition leader Juan Guaidó as supposed “interim president.”

Guaidó, who was unknown to a staggering 81 percent of Venezuelans according to a January poll, has tried to usurp the legitimate government of President Nicolás Maduro, who was re-elected in a 2018 presidential election that was voluntarily boycotted by the US-backed opposition.

This ongoing coup attempt is the culmination of a two-decade long US destabilization campaign aimed at shattering Venezuela’s Bolivarian Revolution. Caracas has long described this campaign as one of economic warfare. And internal US government documents show that’s exactly what it is.

US “financial weapons” and “economic warfare”

With the coup raging in Venezuela, WikiLeaks published an excerpt from what it described as the “US coup manual,” the Army Special Operations Forces Unconventional Warfare booklet (PDF).

WikiLeaks drew particular attention to a segment of the publication entitled “Financial Instrument of U.S. National Power and Unconventional Warfare.” This section outlines how the US government, in its own words, uses “financial weapons” to wage “economic warfare” against foreign governments that try to pursue an independent path.

In the unconventional warfare manual, Army Special Operations Forces (ARSOF) wrote that the US “can use financial power as a weapon in times of conflict up to and including large-scale general war.” And it noted that “manipulation of U.S. financial strength can leverage the policies and cooperation of state governments” — that is to say, force those governments to comply with US policy.

Institutions that help the US government accomplish this, ARSOF continued, are the World Bank, International Monetary Fund (IMF), and Organization for Economic Cooperation and Development (OECD).

Examples of “financial weapons,” include “State manipulation of tax and interest rates” and pressure on financial institutions to restrict “loans, grants, or other financial assistance to foreign state and nonstate actors,” ARSOF stated.

“The Office of Foreign Assets Control (OFAC) has a long history of conducting economic warfare valuable to any ARSOF UW campaign,” the manual concludes.

The US Treasury Department’s Office of Foreign Assets Control is what oversees sanctions against countries like Venezuela. And on January 28, the day WikiLeaks tweeted the above excerpt, OFAC sanctioned Venezuela’s state-owned oil company, Petroleos de Venezuela, S.A. (PDVSA).

The goal of these latest US sanctions is clear: Steve Mnuchin, Trump’s treasury secretary and the former chief information officer of Goldman Sachs, indicated that Venezuela’s US-backed coup leader Juan Guaidó will use PDVSA and Venezuela’s US-based oil assets to bankroll his unelected parallel government.

OFAC, which ARSOF noted “has a long history of conducting economic warfare,” was careful to point out while it was sanctioning PDVSA that this state oil company is “a primary source of Venezuela’s income and foreign currency.”

As The Grayzone has reported, Guaidó immediately targeted PDVSA within hours of having declared himself “interim president” (with the Trump administration’s blessing). Guaidó and the US-backed right-wing opposition hope to restructure PDVSA and move toward privatization, rewriting Venezuela’s hydrocarbons laws and handing out contracts to allow multinational corporations access to the largest oil reserves on the planet. And Guaidó has sought financial assistance from the IMF, which ARSOF identified as a US ally in its economic warfare strategy.

The ARSOF Unconventional Warfare manual makes it clear that these policies are not just a peaceful pressure campaign; they are part of an explicit strategy of “unconventional warfare” aimed at Venezuela.

These words, straight from the mouth of the US government, confirm that sanctions and other punitive economic policies are not a mere prelude to war; they are a form of war.

The United States is not “considering” a war against Venezuela; the superpower has already been waging a war, for years, on this independent South American nation.

US sanctions “comparable with medieval sieges of towns”

This is precisely what led former UN rapporteur Alfred de Zayas to say, both in an interview with The Independent and in a report on Venezuela that he submitted to the UN Human Rights Council, that the United States, and allies like the European Union and Canada, have waged “economic warfare” on Venezuela.

De Zayas, a legal expert who teaches international law at the Geneva School of Diplomacy, wrote, “Modern-day economic sanctions and blockades are comparable with medieval sieges of towns.” He added, “Twenty-first century sanctions attempt to bring not just a town, but sovereign countries to their knees.”

The first UN rapporteur to report from Venezuela in a shocking 21 years, de Zayas told The Independent, “When I come and I say the emigration is partly attributable to the economic war waged against Venezuela and is partly attributable to the sanctions, people don’t like to hear that. They just want the simple narrative that socialism failed and it failed the Venezuelan people.”

And the US has not been alone in its aggression. The Bank of England has likewise refused to let the sovereign government of Venezuela withdraw its £1.2 billion of gold reserves. Instead, a UK foreign office minister has sought to give that money to the Trump-appointed coup leader, Juan Guaidó.

The ARSOF Unconventional Warfare manual provides further insight into what really motivates the United States to wage economic warfare in Venezuela and beyond.

The document outlines one of the key goals of US foreign policy:

Furthering free trade, unencumbered by tariffs, interdictions, and other economic barriers, and furthering capitalism to foster economic growth, improve living conditions, and promote the sale and mobility of U.S. products to international consumers.

“It will make a big difference to the United States economically if we could have American oil companies really invest in and produce the oil capabilities in Venezuela.”